This morning I was perusing my usual round of woo-woo websites when I came across a story called "Is this the Ohio Grassman?"  It featured the following photograph: 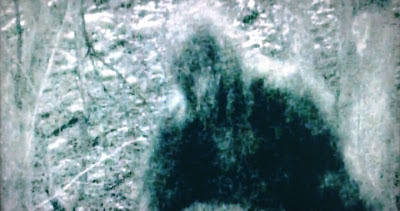 Turns out some guys from The Appalachian Investigators of Mysterious Sightings recently caught the image on a game camera, and it became the subject of an episode of Destination America: Mountain Monsters.

Well, first, I'd never heard of the television series, which isn't all that odd, because (1) I don't watch television, and (2) new series about paranormal stuff crop up every week, sort of like crabgrass in my garden only less appealing.  But more surprising was that I hadn't heard of the Grassman either, despite my rather guilty fascination with cryptozoology since I was a teenager.

So I decided to do some research on the Grassman, which led me to his Wikipedia page, wherein I learned that the Grassman is basically a shaggy subspecies of Bigfoot that lives near Akron, Ohio, and whose "main food source is wheat grass" but who "also enjoys eating small dogs such as poodles."

I guess you have to get your protein somewhere.

So while I was on the Grassman's Wikipedia page, I scrolled down, and found a link that said "List of Cryptids."   Naturally, I had to go there, figuring that if I'd missed the Ohio Grassman I might have missed others.

Boy, did that turn out to be an understatement.

Turns out there's a whole petting zoo's worth of cryptids that I didn't know about.  Here's a sampler:
I hadn't heard of any of those, and those are just the A's.  And each one has its own Wikipedia page, wherein you can find out about its habits, range, behavior, and natural history.  (I found it amusing that the "status" for each of these was listed as "unconfirmed."  Well, duh.  Once it's confirmed, it's no longer a "cryptid," just an "animal.")

All of this just highlights some things that I've noted before:

(2) It's easy to mistake one thing for another -- for example, a bat for a pterodactyl.  Especially at night, and especially when you've been drinking.

(3) There are some odd critters out there, and it is possible that some of these things are real.  But to accept that, I would need better evidence than a blurry photograph.  I know how to take blurry photographs myself, and I know how easily they can be digitally manipulated -- i.e., faked.  However, it must be said that the sheer number of different cryptid claims is so high that it seems unlikely in the extreme that all, or even most, of them are true.

So, anyway, that's our cryptozoological report for the day, along with a suggestion of further reading.  If you go through all the Wikipedia links for all of the cryptids, it'll take you a while, so I suggest you get yourself a nice big cup of coffee and get right on that.   Let me know which ones strike your fancy -- there are some real contenders, here, such as the "Flatwoods Monster" of Braxton County, West Virginia, which is described as follows:


Most agree that it was at least 10 feet tall and that it had a red face which appeared to glow from within, and a green body. Witnesses described the creature's head as having bulging, non-human eyes and as either being shaped like a heart, or as having a large heart shaped cowling behind it. The creature's body was described as being man-shaped and clad in a dark pleated skirt; later described as being green. Some accounts record that the creature had no visible arms, while others describe it as having short, stubby arms; ending in long, claw-like fingers, which protruded from the front of its body.

I don't know how you can beat a ten-foot-tall red-faced bulgy-eyed monster with claws, wearing a pleated skirt.  But that's just me.
Posted by Gordon Bonnet at 4:26 AM