Just recently, there's been a claim making the rounds of social media sites by virtue of the "Forward," "Repost," and "Share" functions.  The original seems to have been written about a year and a half ago, but for some reason it's really been circulating in the last few weeks, which is odd given that it is composed of pure, unadulterated, USDA-Grade-A bullshit.

The claim?  That you shouldn't cut your hair (that includes facial hair, guys), because it's an "extension of your nervous system."

Naturally, we have to begin the whole thing with allegations that this critical information has been covered up by the government, because nothing is complete without a hint of conspiracy:

We then hear from "Sally" [name changed to protect privacy] whose [unnamed] husband worked as a psychologist for a VA hospital.  He uncovered something really strange in some reports of mysterious "government studies:"


Sally said, “I remember clearly an evening when my husband came back to our apartment on Doctor’s Circle carrying a thick official looking folder in his hands. Inside were hundreds of pages of certain studies commissioned by the government. He was in shock from the contents. What he read in those documents completely changed his life. From that moment on my conservative middle of the road husband grew his hair and beard and never cut them again. What is more, the VA Medical center let him do it, and other very conservative men in the staff followed his example. As I read the documents, I learned why.

It seems that during the Viet Nam War special forces in the war department had sent undercover experts to comb American Indian Reservations looking for talented scouts, for tough young men trained to move stealthily through rough terrain. They were especially looking for men with outstanding, almost supernatural, tracking abilities. Before being approached, these carefully selected men were extensively documented as experts in tracking and survival.

With the usual enticements, the well proven smooth phrases used to enroll new recruits, some of these Indian trackers were then enlisted. Once enlisted, an amazing thing happened. Whatever talents and skills they had possessed on the reservation seemed to mysteriously disappear, as recruit after recruit failed to perform as expected in the field.

Serious casualities [sic] and failures of performance led the government to contract expensive testing of these recruits, and this is what was found.

When questioned about their failure to perform as expected, the older recruits replied consistently that when they received their required military haircuts, they could no longer ‘sense’ the enemy, they could no longer access a ‘sixth sense’ , their ‘intuition’ no longer was reliable, they couldn’t ‘read’ subtle signs as well or access subtle extrasensory information.

This, we are told, is why "Indians keep their hair long."

But what is the science behind all of this?  Simple, they say; hair is actually a bunch of... nerves:


Each part of the body has highly sensitive work to perform for the survival and well being of the body as a whole. The body has a reason for every part of itself.

Hair is an extension of the nervous system, it can be correctly seen as exteriorized nerves, a type of highly-evolved ‘feelers’ or ‘antennae’ that transmit vast amounts of important information to the brain stem, the limbic system, and the neocortex.

Not only does hair in people, including facial hair in men, provide an information highway reaching the brain, hair also emits energy, the electromagnetic energy emitted by the brain into the outer environment. This has been seen in Kirlian photography when a person is photographed with long hair and then rephotographed after the hair is cut.

When hair is cut, receiving and sending transmissions to and from the environment are greatly hampered. This results in ‘numbing-out’.

Right!  Because highly complex cells, with nuclei and other organelles, and an intricate set of transport proteins, that are capable of sending and receiving electrical signals, are exactly the same thing as a bunch of dead strands of keratin.

In one sense -- one very limited sense -- they are correct.  Hairs on the skin do increase its sensitivity, and some animals (cats are an excellent example) use whiskers as tactile sensors.  But the idea that hair is acting as some kind of conduit for psychic energy is ridiculous.

And as for Kirlian photography, of course you get a different image if you remove someone's hair.  Kirlian photography is just a method for photographing the static electrical discharge from something (or someone) when you subject it (or him) to a high voltage at low current (the equivalent of a bad carpet shock).  Have you ever seen photographs of people who are holding on to a Van de Graaff generator? 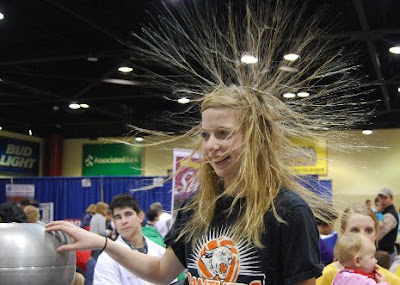 This photograph would look completely different if she was bald.

And I suspect that the Dalai Lama might disagree with the statement that guys who are bald are "numbed out."

As for me, I have had long hair.  Really long, at one point in my life, like down to the middle of my back.  I also, at one point, had facial hair.  I did not notice a bit of difference in my Sensitivity To External Stimuli the day I simultaneously had my pony tail cut off, (and in fact, got what was damn near to a buzz cut) and shaved off all of my facial hair.  Mostly what I noticed is that getting ready for work in the morning took drastically less time, my head was cooler when the weather was hot, and I didn't have to deal with unmanageable snarls on windy days.  But I was no more in tune with "the Sixth Sense" when I had long hair than I am now (i.e. not at all), despite what all of the vague, uncited "government studies" allegedly show.

So that's our dose of pseudoscience for this morning.  Leaving your hair long so you can pick up, and broadcast, psychic signals.  I'd like to say that this will be the end of the discussion, but that may be a forlorn hope given that this article seems to be making the rounds (one Facebook link to it I saw had been "liked" over 5,000 times, and had hundreds of comments).  Be that as it may, I'm done discussing it, because I need to go take a shower and wash my nerve endings.
Posted by Gordon Bonnet at 5:01 AM