The Vampire Beast of Bladenboro

So, today we're going to investigate a topic that I know is weighing heavily on all of your minds: is the Vampire Beast of North Carolina back?

Yesterday, in the delightfully wacky weird news outlet Who Forted?, writer Dana Matthews tells the tale of a bizarre beast that troubled the good citizens of Bladen County, North Carolina in 1953.  Matthews says, about the first round of attacks:


In 1953 the Bladenboro Newspaper covered a story about a strange creature that had blamed for the deaths of numerous dogs, draining them of their blood. Local eyewitnesses who spotted the beast claimed it possessed the body of a bear, the head of a cat, and that when it opened its mouth to growl it made the sound of a woman screaming.

The creature then proceeded to vanish for fifty years.  Attacks didn't begin again until 2003.  This makes you wonder what it was eating all that time, doesn't it?  Be that as it may, the second round of deaths sounded pretty much like the first:


The bizarre animal exsanguination began again in 2003, only this time it seemed the creature had broadened his horizons and was now killing in a 150-miles radius beyond Bladenboro.  During its second blood-run, the Vampire Beast of North Carolina was managing to slay even the bulkiest of Pit Bulls with ease and many Bladenboro residents claimed to have found strange tracks around their dead pets that even wildlife biologists couldn’t explain.

Pretty scary stuff.  So imagine the terror of the residents when, just last week, the Vampire Beast got hungry this time after only a ten-year hiatus, and it all started up again:


According to a report by paranormal investigator Thomas Byers, on June 15th 2013, Bladenboro, NC resident Misty Turner and her son Tyler contacted local police after something visited their farm in the dead of night, killing three of their horses and a large Bull Mastiff dog. Misty’s son Tyler found the horses after the barking dog had alerted the family to the fact that something was skulking around the property. The dog continued to bark for quite some time, obsessed with the dense wooded area alongside the farm.

Arriving police and veterinarians were shocked to discover that the horses had died from very deep puncture wounds to the neck. Even more shocking was that it seemed that the purpose of the marks was to allow the blood to be drained from the animals. The horses were also reported to have been wet with sweat, almost as if they had been running hard to avoid whatever was chasing them down.

The following evening, much to the Turner’s display, their dog was also killed in the exact same fashion, with two puncture marks to the neck, found with its blood drained. Misty claims to have seen the thing that had killed her animals as it was running from the lifeless body of her pet. Her description of the creature matched the same eyewitness reports of the Vampire Beast reported in 1953.

We are also treated to an artist's rendition of the Vampire Beast, in case your imagination hadn't been sufficiently stirred by the eyewitness description: 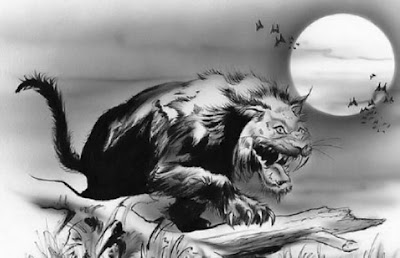 I'm guessing that the bats are artistic license and don't actually follow the Vampire Beast around, but I could be wrong.

Well, no offense to the people of Bladenboro, but I tend to be doubtful about all of this.  The whole story -- reports of animal killings and exsanguination, strange wounds, unnamed veterinarians and wildlife biologists admitting bafflement, a mysterious beast that is supposedly responsible -- sounds much like the alleged depredations of El Chupacabra, coupled with all of the cattle mutilation stories you hear (variously attributed to satanists, aliens, or monsters).  And I suspect that if anyone really does do a thorough investigation, the whole thing won't hold water, at least not as an "unexplained monster attack."

The problem is that ordinary animal attacks often lead to rather oddball wounds.  A study done by the Washington County (Arkansas) Sheriff's Department, in response to claims of bizarre livestock mutilation, found the following [Source]:


They placed a dead cow in a field and had observers watch what happened over the next 48 hours. When they reported that bloating led to incision-like tears in the skin and that blowflies and maggots had cleaned out the soft tissue so that the carcass looked exactly like those that had been attributed to aliens or satanic cultists, they were generally ignored by the community of true believers.

Claims of exsanguination -- removal of all of the blood from a dead or dying animal -- have never been substantiated.  According to Benjamin Radford, whose book Tracking the Chupacabra: the Vampire Beast in Fact, Fiction, and Folklore was a finalist for the ForeWord Review Book of the Year and was called a "slam-dunk debunk" by The Skeptical Inquirer, the apparent exsanguination has a completely natural cause:


The apparent loss of blood could be explained by internal hemorrhaging and pooling of blood at the bottom of the corpse.  The attribution of the attacks on livestock to a vampiric entity can be explained by the puncture wounds resulting from the canine teeth left by most predators, who often instinctively go for the neck, according to taxidermist Jerry Ayer.

Put another way, once the heart stops pushing the blood around, the blood settles downward due to gravity, and the upper parts -- the parts immediately accessible to anyone investigating the case -- appear to be completely devoid of blood when cut open.

So, sorry to puncture your scary, monster-shaped balloon, but it looks like the Vampire Beast is just a plain old beast of some kind.  Not that this should go uninvestigated, mind you; if I had my horses killed by some large predatory animal, I'd want to do something about it.  Horses were attacked by rabid bobcats in Florida in 2010 and again in 2011 -- if I had to place a bet on what was responsible for the Bladenboro attacks, it'd be that.

Anyhow, that's our news from the cryptozoological world.  At least this story was more interesting that the latest from Melba Ketchum, who is once again blathering on about how she really did know what she was doing, there really is a Bigfoot, and all of the people who are criticizing her are big ol' poopyheads.  Given the choice, I'd rather face a Vampire Beast than a delusional geneticist any day of the week.
Posted by Gordon Bonnet at 4:29 AM