Today I learned that the Catholic church still engages in a practice that I thought it had abandoned years ago.

I refer to the granting of "indulgences" -- the guarantee of less time in purgatory for sins you've committed (and confessed to, and done penance for, and been granted absolution) because you have done some special action in addition to all that.

Time off for good behavior, is how I see it.

I remember running into this idea when I was in high school world history class, a time when I was still a practicing (albeit rather dubious) Roman Catholic.  Our teacher, Ms. Syrie, described in some detail the abuses of the granting of indulgences during the Middle Ages -- people being granted indulgences for monetary contributions to the church (the bigger the donation, the more time off you got); noblemen getting them for visiting abbeys and monasteries, where they were feasted like kings; and some folks even gaming the system by purchasing indulgences ahead of time for sins they hadn't committed yet, but intended to.  ("Yes, Father, I would like some indulgences, because I'm planning on cheating my business partner next week, I'm going to lie on my tax return, and I'd like to commit fornication at least eight or nine times this month.  How much do I owe you?"  "That will be $8,000, my son, taking into account the coupons you brought in from Catholic Digest.") 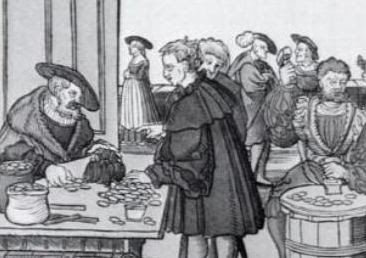 To be fair, there was some effort to rein in the practice, especially after Martin Luther had the guts to point out how far the abuses had gone.  I kind of thought that the whole thing had faded away, but it turns out that as recently as Pope Paul VI there was reconsideration of this doctrine.  Apparently now, there are only a few things that can get you paroled from purgatory early:
There is apparently still some argument, though.  Lots of people still believe, for example, that if you walk up the Sacred Steps in Rome, praying the whole way, you get nine years off of your sentence for each step.  It has always struck me as weird how the people in charge seem to know how much time off you get for particular actions, when (1) as far as I know, no one has ever reported back from purgatory, and (2) god hasn't publicly said anything about it himself.  I know, as an atheist, that I couldn't reasonably be expected to have any other reaction, but it still strikes me as, even by religious standards, making shit up because it sounds good.

Anyhow, the point of all this is that it's still going on today.  Just a couple of days ago, Pope Francis announced that he's offering time off from purgatory if you follow him on Twitter.  No, I'm not joking -- I'm not nearly creative enough to come up with something this strange.

The pope is going to be in Brazil next Monday as part of Catholic Youth Day, and the Vatican has announced that the powers-that-be are mindful that not everyone can afford to hop on a plane and go see him.  So anyone who follows the "rites and pious exercises" that are being conducted there by reading the pope's tweets will be granted an indulgence.  "But you must be following the events live," a Vatican spokesperson said.  "It is not as if you can get an indulgence by chatting on the internet."

You also have to be "truly penitent and contrite" for whatever sin it is you're trying to get out of paying for.

"You can't obtain indulgences like getting a coffee from a vending machine," Archbishop Claudio Maria Celli, head of the pontifical council for social communication, told the Italian daily Corriere della Sera.   "What really counts is that the tweets the Pope sends from Brazil or the photos of the Catholic World Youth Day that go up on Pinterest produce authentic spiritual fruit in the hearts of everyone."

So anyway, that's our weird news from the world of religion.  I have to wonder how long it'll be before they start giving time off from purgatory for clicking on those "like if you <heart> Jesus" things you see all the time on Facebook, or offering forgiveness of sins via infomercial.  "Call now!  Hell lasts forever but THIS DEAL WON'T!  Operators are standing by!"
Posted by Gordon Bonnet at 4:25 AM