Barefoot in the park

Are you stressed, tired, and feeling low?  Do you suffer from chronic conditions like arthritis, liver dysfunction, or heart disease?  Maybe what you need isn't conventional medicine.

Maybe what you need is more electrons.

I know you probably think I'm joking, but that is the contention of one Dr. Stephen Sinatra, who has a website that claims that just about everything that is wrong with you can be cured by "grounding" yourself.  In his parlance, this means "walking around barefoot."  Let's hear what he has to say about this amazing medical breakthrough:


The terms "earthing" and "grounding" are interchangeable. It is simply the act of placing your bare feet on the earth, or walking barefoot. When you do, free electrons are transferred from the earth into your body, and this grounding effect is one of the most potent antioxidants we know of...  (I)nflammation thrives when your blood is thick and you have a lot of free radical stress, and a lot of positive charges in your body. Grounding effectively alleviates inflammation because it thins your blood and infuses you with negatively charged ions through the soles of your feet.

The earth is struck by lightning thousands of time each minute, primarily around the equator. Subsequently, the earth carries an enormous negative charge. It's always electron-rich and can serve as a powerful and abundant supply of antioxidant free radical-busting electrons.

The human body appears to be finely tuned to "work" with the earth in the sense that there's a constant flow of energy between our bodies and the earth. When you put your feet on the ground, you absorb large amounts of negative electrons through the soles of your feet. In today's world, this is more important than ever, yet fewer people than ever actually connect with the earth in this way anymore. Free radical stress from exposure to mercury pollution, cigarettes, insecticides, pesticides, trans fats, and radiation, just to name a few, continually deplete your body of electrons.

I'm with him that the Earth, being a large object made of atoms, has lots of electrons.  Those electrons move around some, which generates static charges that can be redistributed via lightning.  Sometimes you do the same thing, on a small scale, when you walk across a carpet and then touch a metal object, generating a cracking sound, a spark that jumps from you to the metal object, and a lot of swearing.

But that's where the science ends and the bullshit begins.

Of course, there's also the minor problem that any slight imbalance between the electrical potential of your body and that of the Earth is adjusted every time you touch anything that is in electrical contact with the ground.  If human disease really was caused by a lack of electrons, you could cure yourself by leaning on a chain-link fence.

The nonsense doesn't end there, however.  Dr. Sinatra, whose ideas lead me to wonder if he got his medical degree from Big Bob's Discount Diploma Warehouse, claims that walking barefoot (1) helps you to make more ATP, (2) thins your blood, and (3) helps you make white blood cells.  He throws around terms like "zeta potential," which turns out to be a real thing -- it's the degree of stability in a colloidal dispersion -- but I think mostly he likes how it sounds.  We are also treated to a highly scientific experiment in which a sunflower in a vase that was plugged into a grounded wall socket lasted longer than one that was plugged into an ungrounded socket: 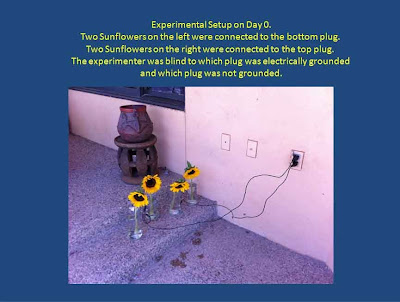 What I want to know is how putting the end of a plugged-in electrical cord into a vase full of water didn't either trip the breaker or electrocute the experimenter.

My favorite part of all of this comes near the end, when he blames all human disease on wearing shoes:


Throughout history, humans mostly walked barefoot or with footwear made of animal skins. They slept on the ground or on skins. Through direct contact or through perspiration-moistened animal skins used as footwear or sleeping mats, the ground's abundant free electrons were able to enter the body, which is electrically conductive. Through this mechanism, every part of the body could equilibrate with the electrical potential of the Earth, thereby stabilizing the electrical environment of all organs, tissues, and cells.

Modern lifestyle has increasingly separated humans from the primordial flow of Earth's electrons. For example, since the 1960s, we have increasingly worn insulating rubber or plastic soled shoes, instead of the traditional leather fashioned from hides. Rossi [one of the researchers Sinatra quotes] has lamented that the use of insulating materials in post-World War II shoes has separated us from the Earth's energy field. Obviously, we no longer sleep on the ground as we did in times past.

During recent decades, chronic illness, immune disorders, and inflammatory diseases have increased dramatically, and some researchers have cited environmental factors as the cause. However, the possibility of modern disconnection with the Earth's surface as a cause has not been considered.

Because, as we all know, humans were so much less prone to disease centuries ago, when we were all sleeping on "perspiration-moistened animal skins."  It's not like average lifespan has increased in the last century, or anything.

Oh, but please continue, Dr. Sinatra, and by all means don't let silly little things like facts get in your way.

Interestingly, Sinatra's pseudoscience has been getting enough press that he merits a mention in The Skeptic's Dictionary, on the page devoted to "Vibrational Medicine," wherein he is slapped down as follows:


So what's the treatment for all this potentially damaging electropollution? As noted above, one treatment is "very low frequency pulsed electromagnetic waves." Hmm. I thought these electromagnetic gadgets were the problem, not the solution. Anyway, there's another treatment called grounding or earthing. What's that, you may wonder. It's standing barefoot on the earth so electrons can flow through your feet into your body and thin your blood, kill free radicals, and who knows what else... So, two of the main treatments for electropollution is more electrons and more electromagnetism. Sounds just about right to me. What's the treatment for a broken arm? Hitting it with a hammer?

Now, don't get me wrong.  I love being barefoot myself, and in fact on warm days generally wear the legally permissible minimum amount of clothing.  But I'm not buying that it has the slightest effect on anything but my overall mood.  And if you're ill, you really are better off seeking out conventional medical help, not subscribing to the bullshit ideas of a guy who sounds like he failed freshman physics.
Posted by Gordon Bonnet at 3:45 AM