Comet ISON, and the end of the world as we know it

Ever since the media started calling Comet ISON the "Comet of the Century," I was waiting for the woo-woo hoopla to start.

There's something about comets that excites the imagination, to be sure, and I use the word "imagination" deliberately.  When the 1910 appearance of Halley's Comet was imminent, astronomer Camille Flammarion let slip that one of the materials present in comet tails was cyanide, and furthermore stated that the passage of the Earth through the comet's tail could "possibly snuff out all life on this planet."  This unleashed a panic wherein people purchased gas masks by the thousands, and more improbably, "anti-comet pills" and "comet umbrellas."  Because we all know that if you are exposed to cyanide, all you have to do is huddle underneath your umbrella and things will be just fine.

Of course, none of that came to pass, but that doesn't mean that people are any more sensible about things nowadays.  Halley reappeared in 1986, but not before we had another "Comet of the Century," Comet Kohoutek in 1973, which was supposed to be spectacular but which got downgraded to the Comet of Next Tuesday At 11 PM when it turned out to be nearly impossible to see.  This didn't stop noted wingnut David Berg, leader of the fringe group the Children of God, from claiming that Kohoutek was the harbinger of doom and a sign of the End Times, thus becoming one in a long series of instances where the world failed to cooperate and End, as planned.

Then, of course, we had the never-to-be-forgotten Comet Elenin, which in 2011 was rumored not to be a comet at all, but (1) a UFO, (2) a planet called Nibiru, (3) an incoming megaweapon that would destroy Earth, or perhaps (4) all of the above.  Elenin also sparked mass panic amongst people who failed 8th grade science when it was claimed that the comet was going to spark massive tsunamis, and cause the magnetic poles to flip.  Or possibly cause the whole Earth to flip over.  Or slingshot us right out of our orbit.  But fortunately for us, the Law of Gravitation is still strictly enforced in most jurisdictions, and Elenin's miniscule mass relative to the Earth's caused no effects whatsoever other than a disappointed "Awwww" from the woo-woos, especially when it disintegrated completely on close pass with the sun. 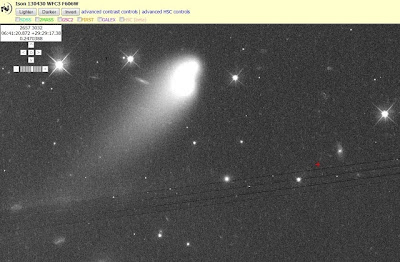 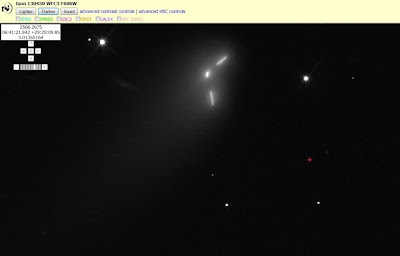 Then, there's the chance that ISON will cause a solar flare -- something not outside the realm of possibility, apparently, according to recent research by astronomer David Eichler of Ben Gurion University in Israel.  Eichler believes that even something as relatively small as a comet could cause a shock wave when it struck the sun because of how fast it's moving, and that shock wave would cause a solar flare/coronal mass ejection event that could wreak havoc with electronics here on Earth.  Not content with just having our cellphones get fried, the alarmists have already nicknamed ISON "the Sungrazer" and predicted that it will cause an "Extinction-Level Event."

Is it just me, or do these people seem to be happy about the obliteration of all life on Earth?

In any case, the actual research on ISON seems to indicate that (1) it's going to be another Kohoutek-style flop, visually, and (2) if it gets close to the sun, it will just disintegrate, like Elenin did.  Which means we'll have to wait for the next Comet of the Century to kill us all.