I guess it was bound to happen.

It started decades ago, with Jaws.  Then you had the hyped-up "documentaries" of the 80s and 90s featuring lines like, "Let's put the bikini-clad Baywatch wannabee in the giant metal cage, lower it into the water, and throw around bleeding fish parts, and see what happens."  But things ramped up considerably when the Discovery channel started "Shark Week."  Then we had the following, which made a lot of us science types shake our heads and say, "Um... really?": 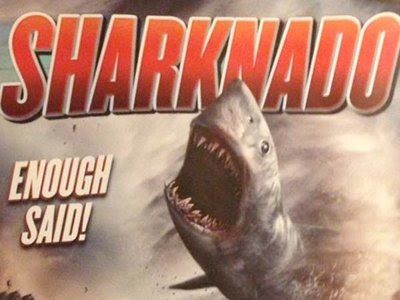 Oh, if only it were "enough said."  Because you know it's not.  It is never enough said, once the ball gets rolling, especially if the ball has teeth and fins.  Because just a few days ago we had a new "documentary" on Discovery, one that upped the ante even further, by claiming that one of the largest seagoing predators that has ever lived... is still alive. 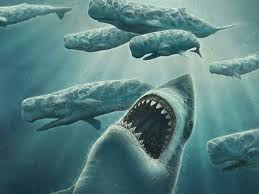 Called Carcharodon megalodon, or just "Megalodon" for short, this thing was, to put it bluntly, freakin' huge.  Fossils have been found that indicate that the biggest ones could reach 18 meters in length (for reference, the largest great white sharks get to be about 6 meters long).  So, this was one scary-ass beast, the likes of which would make me hesitant to set foot in the ocean again.

If it still existed.  Which it doesn't.  Scientists are in agreement that Megalodon went extinct about 1.5 million years ago.  But of course, given the foolishness that has appeared on Discovery (remember Finding Bigfoot?  and The Haunted?  and, most germane to our discussion here, Mermaids: The Body Found?), I shouldn't really be surprised.

Oh, but there's a poll!  Because scientific truth is determined by public consensus, evidently.  You can vote that "YES! The evidence for Megalodon can't be ignored! The monster shark lives!" or "Maybe.  95% of our oceans remain unexplored, so it's possible that Megalodon is still out there."  Or (and I imagine this choice accompanied by a sad shake of the head), "No.  The scientists are right."  So, anyway, I voted (guess which way?), mostly so I could see what the results were, and was unsurprised that 32% of the respondents voted "yes," and 48% "maybe," leaving the poor scientists in the dust with a paltry 20% of the vote.

Of course, given that a common attitude is that public school biology curricula should eliminate the teaching of evolution "because lots of people don't believe in it," I shouldn't be surprised that (1) the public is easy to hoodwink into believing nonsense, and (2) there's a sense that science is a democracy.

Now, don't misunderstand me.  I love the ocean, and I think sharks are really cool.  And there's no doubt that charismatic megafauna are big sellers, explaining why you see lots of calendars and framed prints and greeting cards and tattoos with images of wolves, lions, and jaguars, and far fewer with wombats, possums, and naked mole rats.  I get why there's never been a film called Rabbitnado, although I have to admit I would watch it, especially if the bunnies turned out to be like the Beast of Caer Bannog: 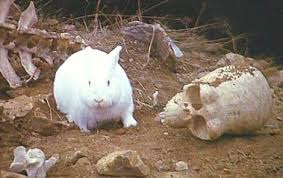 But that's just me.  And since these media outlets exist to make money, not to promote good science, it's no wonder they jump on the bandwagon.

Sharon Hill, in her wonderful blog Doubtful News, did a piece on Megalodon recently, and expressed hope that "Shark Week" and other dubious attempts at nature documentary would raise awareness of shark conservation.  Me, I'm less sanguine.  When the movie Jaws came out in 1975, there followed a senseless slaughter of sharks of all sorts, including the completely harmless gray nurse shark.  Just as people don't get that science is done based on evidence, not on voting in a poll, they also don't tend to respond rationally when an irresponsible media outlet has ramped up the fear.

Anyhow, that's today's exercise in futility.  Given that Megalodon got "record ratings," I'm doubtful that anything I say is going to have an effect.  Maybe I should make my own documentary, you think?  You can't beat 'em, join 'em.  How about Hopping Mad: Is Australia's Carnivorous Kangaroo Still Alive in the Outback?  Start with some photographs of fossil skeletons: 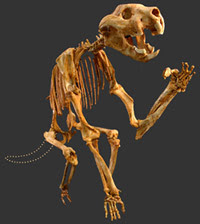 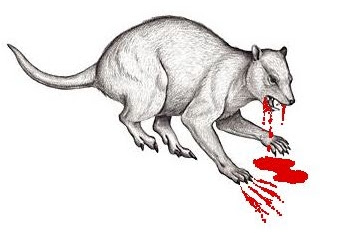 Hire a scientist or two to weigh in on how we can never be sure that an animal is extinct, because the Coelacanth, you know, and so on.  Then have a poll.   Sure fire winner, right?