Yesterday I did what I should never do, something that is even sillier than responding to a post in the "Comments" section on the online news: I responded to someone who had posted inflammatory rhetoric on Facebook.

Even as I was doing it, part of my brain was shouting, "No!  Don't do this!  It'll just make things worse!"  But the other part of my brain just responded with a helpful hand gesture involving one finger, and made me go ahead and click "Post" on my response.

What incited me to do this was a Facebook page link that led me to the website of The Alliance Defending Freedom, which has the headline, "How anti-Christian extremists are using our public schools to radically transform our culture (and how YOU can use the $1.2 million matching grant to stop them!)."  We are also treated to this picture, which illustrates how serious all this is: 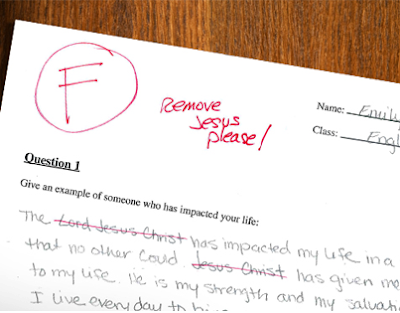 In fact, it was the picture that was what triggered my response, which was, "...except that this never happened.  But carry on."  The original poster responded, "But it's heading that way!"  And I responded, "Oh, c'mon.  I would never do any such thing to one of my students, and I'm an atheist, for cryin' out loud."  And she responded, "That's because YOU have common sense.  Not everyone does."

When I looked at the Alliance Defending Freedom's website, I think what struck me most was the following bit:


Act now to protect religious freedom in public schools!
All of them have big plans for eliminating your faith from our public schools.

The first step in their scheme has been to crack down on any form of religious expression in school.

Prayers are forbidden. Religious references are censored in students’ schoolwork. Students are punished for speaking out about their faith in class.

And these extremists are not stopping there. They’re striving to use public schools to undermine our children’s faith and indoctrinate them with anti-Christian propaganda.

And I thought, "propaganda?"  Really?

Webster's defines propaganda as, "(1) Information, esp. of a biased or misleading nature, used to promote or publicize a particular political cause or point of view; or (2) The dissemination of such information as a political strategy."

And these people are accusing the atheists of using propaganda?

Let's start with poor little Emily's school paper, which has been marked with an "F" and "Remove Jesus please!"  This is so obviously a poorly Photoshopped image that I wouldn't think anyone would fall for it; still less for a scenario where any teacher, in any school in the US, would give an assignment to their students to "give an example of someone who impacted your life" and then add the caveat of, "Oh, but it can't be Jesus.  No Jesus allowed."  Despite the impression of the people who wrote this website, that Christians are some kind of small, desperately embattled group, might I point out that in the US, Christians are still vastly in the majority, at (as of last year) 71% of the population?  In many places in the US, it is hard to find anyone who isn't Christian.  So tell me: what's the likelihood of some evil atheistic teacher getting away with giving a child an F on a paper for mentioning Jesus?  Nearly three-quarters of the nation would be seething with outrage.

Oh, but try even having kids learn about other religions, and see how these people react.  Just last week, an elementary school in Wichita, Kansas was forced by public outcry to remove a display that described the "Five Pillars of Islam" after a photograph of the bulletin board went viral (and especially after The Washington Post said that the display was promoting Islam).  Never mind that the school also had displays about Judaism, Buddhism, Hinduism, and Christianity, the latter including a poster of the Last Supper.  Never mind that teaching about world religions -- including Christianity -- is part of the state's elementary school curriculum.

Oh, and it's all well and good to "pray for our efforts to keep the door open for the spread of the Gospel in public schools," to quote the Alliance Defending Freedom's website again.  But don't even let the kids be exposed to information about any other worldviews.  Can't have that.

Apparently, it's perfectly fine to break down the Separation of Church and State, but you damn well better make sure that it's the right church you're letting in.

Bottom line: proselytizing, of any kind, has no place in public schools.  I would be wrong to try to force my atheism on my students, or even to try to convince them in some more subtle fashion.  Matters of belief have no place in the classroom.  But if I would be wrong to put up some kind of Atheist Manifesto in my classroom (if such a thing existed), then the teacher in Muldrow High School, of Muldrow, Oklahoma was also wrong for putting up the Ten Commandments in her room.  (And lest you think that the Ten Commandments are just some kind of universally-accepted norms for good behavior, allow me to remind you that the first one reads, "I am the Lord your God, who brought you out of the land of Egypt, out of the house of slavery; you shall have no other gods before me.")  I might also point out that when 11th grader Gage Pulliam contacted the Freedom From Religion Foundation about this unconstitutional display, he was harassed by Christian students to the point of being threatened with physical violence, despite the fact that he said publicly, "I want people to know that this isn't me trying to attack religion.  This is me trying to create an environment for kids where they can feel equal."

The knife cuts both ways, doesn't it?  Funny thing, that.  And unlike little Emily's Jesus paper, Gage Pulliam and the harassment he faced is real.

What we need here is tolerance, and an understanding that belief is a matter of conscience, best left to discussion between children and their friends and families.  There are, actually, places where religion should be checked at the door -- and public schools are one of them.  This doesn't mean abandoning your beliefs, it just means not using them as some kind of hammer to smash over the heads of people who don't happen to think like you.

And it also means not using sleazy propaganda to try to convince people.
Posted by Gordon Bonnet at 4:50 AM