New from the Well, If It Makes You Happy department, we have a story about a lawyer in Kenya who is trying to have Jesus' conviction overturned.  [Source]

Dola Indidis, a former spokesperson for the Kenyan judiciary, is petitioning the International Court of Justice at The Hague to give Jesus a posthumous pardon.  "The selective and malicious prosecution (of Jesus) violated his human rights," Indidis said, adding that Pontius Pilate was guilty of "judicial misconduct, abuse of office, bias and prejudice." 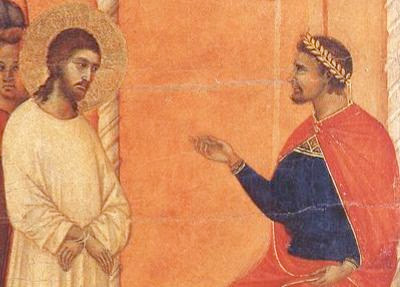 This isn't the first time Indidis has attempted this.  In 2007, he brought his case to the Kenyan High Court, but they threw it out, claiming that they "lacked jurisdiction."

Now, I'm no expert in international law, but it does strike me as a bit of a legal quagmire, given that (1) all of the people involved in the trial have been dead for almost 2,000 years, (2) the only documents referring to the case are in the New Testament, which even true believers can't claim to be an unbiased source, and (3) the governmental body by which Jesus was tried doesn't, technically, exist any more.  The Roman Empire itself more or less ceased to be 1,500 odd years ago, so it's not like there'll be any possible response from them.

My gut reaction has always been that posthumous pardons are a little... pointless.  It's not that they're uncommon; the convictions of the Salem "witches" were overturned one by one, the last ones in 1992 (and honestly, it surprises me that it took that long).  Joan of Arc was retried in 1456, only 25 years after her execution, and found innocent of heresy -- the first step that would lead to her eventual canonization in 1920.  Even poor Alan Turing, convicted of homosexual acts in the United Kingdom in 1952 and "chemically castrated" with female hormones (a treatment that many believe contributed to his severe depression and ultimate suicide in 1954), stands a good chance of receiving an official pardon this year.  And while I certainly think that the motivation for these pardons is good, and I can understand the desire of family members to clear their relatives' unfairly besmirched names, it doesn't do the victims much good in the here-and-now.

Might make better sense to work on improving the justice system we currently have, to make sure such injustices don't continue to happen, don't you think?

Be that as it may, Dola Indidis' quixotic quest to secure a retrial for The Son of God opens up the far thornier problem of whether the religious folks in the world want Jesus to be pardoned.  As far as I understand it, the whole point of the New Testament is that Jesus died for our sins, and God The Father sent him down here specifically so he would die.  Right?  So wouldn't pardoning him kind of be... counterproductive, salvation-of-humanity-wise?

Now, I have to admit that I have never understood this whole point, and even though I'm an atheist I've read a good bit of what various Christian apologists have to say about it.  It seems to boil down to god sending himself to be tortured and executed for crimes he didn't commit in order for him to forgive us for sins we did commit, which makes no sense whatsoever.  After all, if god wanted to forgive us, why didn't he just go ahead and do it without all of the unpleasant flogging and crown of thorns and crucifixion business?  I don't really see what was gained by the whole episode other than generating hundreds of thousands of pieces of really grotesque statuary, suitable for scaring Christian children lo unto this very day.

Indidis, himself a Roman Catholic, doesn't seem to see any problem with this, but the whole thing has clearly shaken up the powers-that-be in Kenya.  Father Maloba Wesonga, spokesperson for the diocese of Nairobi, seemed to be uncertain how to respond, when he heard about Indidis' idea.  "As we know it, the trial had to happen," Wesonga said to reporters.  "We must understand that Jesus was not vulnerable and nobody can do justice to God."

Which puts him in the odd position, as a Catholic priest, of saying he is in favor of sustaining Jesus' conviction and execution.

You have to wonder how the Catholics are going to reconcile that stance.

I'm guessing that the International Court of Justice will probably refuse to hear Indidis' case, given that they have plenty of better things to do with their time.  So this whole issue will probably fizzle, which honestly is kind of a shame.  I'd love to see how they'd decide the case, because any way it came out, it'd be hard to predict how the Christians would spin it.  As far as Indidis goes, he really should find a new hobby, like putting his mind to seeing that justice is done for people who are still alive.  He could start with his own country, which hasn't exactly had a sterling track record, especially in its turning a blind eye to child prostitution.  Seems to me that this would be a better use of time, energy, and money than trying to determine whether a guy who lived and died almost two millennia ago should receive an official pardon.
Posted by Gordon Bonnet at 4:52 AM