UFOs, eyewitnesses, and the persistence of hope

I have something of an obsession with aliens.

I own t-shirts with pictures of UFOs and little gray guys.  My favorite movie of all time is Contact.  I have a poster on the wall of my classroom of a glowering alien, purchased on my visit to the International UFO Museum in Roswell, New Mexico, and another one that is a replica of the spaceship poster from Fox Mulder's office in The X Files -- the one with the caption, "I Want to Believe." 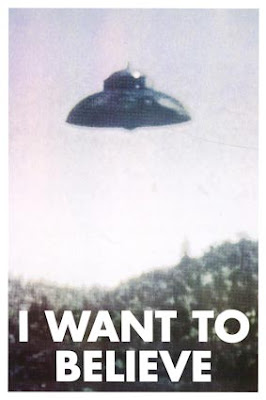 I daily peruse reports on sites like UFO World News and Latest UFO Sightings and Real UFOs and The UFO Casebook, wherein we get to read reports like the following:


Orlando, Florida - 08-19-13 To give a better idea of the area, I am right near UCF and out west from here is the executive airport; it is not uncommon to see many planes flying in an east/west fashion here.

I was on my back porch grilling and noticed a light hanging in the sky, off toward the west.

Initially I thought "Far off plane, no big deal."

I suppose it must have seemed a little strange when I first spotted in retrospect, because I remember thinking "I am going to watch this thing move, it's certainly a plane."

Well, what originally looked like landing lights began to seem a little less so; the longer the thing held its position and size in the air.

The thing was hovering and sort of pulsating and possibly rotating at times.

The light would change from red to blue to white to greenish almost randomly, but at times would seem to follow a sequence as well.

It was slowly descending over the 30-40 minute period, sometimes making abrupt motions. Overall, its motions were slow, though.

And no, I never seem to get tired of reading this stuff.

Of all of the wild claims I hear, I think an alien visitation to Earth is the one that I would be the most excited about, should it turn out to be true.  And I'm not alone; eminent physicist and science writer Michio Kaku has weighed in on the topic, saying, "95% of UFO sightings can be immediately identified as the planet Venus, weather balloons, weather anomalies, swamp gas, you name it, we’ve got it nailed.  It’s the 5% that give you the willies.  5% remain totally unexplained."

And, he says, we should seriously investigate that 5%.

Now, far be it from me to contradict a brilliant man like Dr. Kaku, but my first thought when I heard him say this was, "What, precisely, does he want the scientists to investigate?"  In virtually all of these cases, all we have is eyewitness testimony -- which is notoriously unreliable, and leaves nothing behind for an investigator to study.  Even in cases where the witness isn't lying outright, there's no guarantee that the person is recalling correctly what (s)he saw, or not misinterpreting some completely natural, terrestrial phenomenon.  Thus this handy chart for identifying what you see up in the sky: 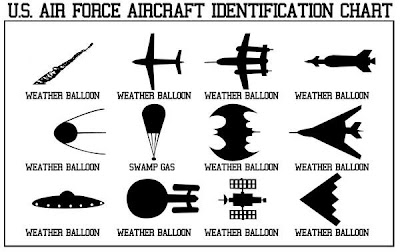 In all seriousness, I think the issue here is very much whether there is anything at all in this realm that qualifies as evidence.  In the case of the sighting from Orlando, Florida, quoted above, should an astronomer be contacted, the question very much remains to be asked what exactly it is that the eyewitness wants the scientist to do about it.  Okay, you saw some flashing lights.  So?  How is that a scientific claim, one that I could evaluate on the basis of rational inquiry?

Some UFO enthusiasts believe that the sheer volume of claims indicates that there is something real to all of it (and you also hear an undercurrent of conspiracy there, too, in that some of them believe that the US government is actively suppressing those claims).  To which I respond: yeah, and recent polls indicate that 46% of the citizens of the United States believe that the Earth is less than ten thousand years old.  Science, fortunately, is not done by popular majority vote.

So, sad to say, there's still not sufficient hard evidence (i.e. any) to believe that advanced extraterrestrial civilizations are visiting the Earth.  Still less that it happens dozens of times a day, which is the impression you get from reading the reports on UFO websites.  It's a shame, really.  Think of how many cool things that a real alien visitation would show -- that we were not alone in the universe, that biological life and intelligence can evolve on other worlds, that interstellar flight was possible.  But at the moment, if we're being honest, we have to hold off on that conclusion -- the fair thing, in the absence of evidence, is to keep our desire for an answer in abeyance.

Forever, if need be.

That doesn't mean, however, that I'm going to take down my posters or stop reading the reports from MUFON (The Mutual UFO Network).

A guy can keep hoping, after all.
Posted by Gordon Bonnet at 4:30 AM