If there's one thing we've learned, over the years, it's that you can never go wrong with a business plan that involves combining lots of different crazy ideas in new ways.

That must be the principle guiding one Doreen Virtue, who has pioneered a technique she calls "Angel Therapy." 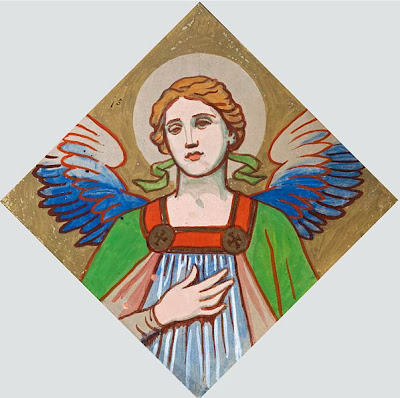 The idea is that all we have to do to heal ourselves from our various ills is to listen to the angels who are trying to get in touch with us, and who are being blocked by our disbelief.  Apparently, like Peter Pan, all you have to do in order to fly is to believe hard enough.

Here's how Virtue herself explains it:


Angel Therapy is a non-denominational spiritual healing method that involves working with a person's guardian angels and archangels, to heal and harmonize every aspect of life. Angel Therapy also helps you to more clearly receive Divine Guidance from the Creator and angels.

Everyone has guardian angels, and these angels perform God's will of peace for us all. When we open ourselves to hear our angels' messages, every aspect of our lives become more peaceful. Many of Doreen’s resources will provide you with more information on this subject, including her books Angel Therapy and Angel Medicine, and the Connecting with Your Angels Kit.

Naturally, I was curious as to what a "kit" would look like that would allow you to Connect With Angels.  Would it contain a pair of walkie-talkies?  A celestial cellphone?  Maybe just a pair of tin cans with a string attached?  But no, all the kits I saw on her website mostly contained things like "Indigo Angel Oracle Cards,"  which is a Tarot-card-style divination deck intended for "indigo people," whom the sales pitch describes as "strong-willed, intuitive leaders with innate spiritual skills."

Who also have indigo-colored auras.  If you were looking for a diagnostic to determine if this was you.

Predictably, this all sounds like a lot of nonsense to me, but there are testimonials out the wazoo singing Virtue's praises up to the heavens (presumably giving her own collection of angels something to cheer about).  For example, Susan Stevenson, a hypnotherapist who specializes in past-life regression (thus adding yet another wacko belief to the list), has this to say:


My life seems to be teeming with angelic connections, and the momentum is building. Have you noticed this in your own life? Angelic reminders that they are with us- 'whispers' in our ear, 'taps' on the shoulder, brushes of air across your skin or changes in air pressure, 'flutters' from deep inside, glints of light and color- all these gentle hints to pay closer attention to their presence. Think back- have you been paying attention, listening, responding? I know I certainly have been. Doreen Virtue, Ph.D., in her newest book "Angel Therapy", says that this increased activity is directly related to the approaching millennium.

Isn't it already the new millennium?  Or do we have to wait until the year 3,000 to see what the angels are all in a tizzy about?

And of course, Stevenson's description of how the angels are communicating -- "flutters from inside," and so on -- could be damn near anything.  A "flutter from inside" could mean that you just saw a cute individual of your preferred gender.  It could mean you just realized that you left for work without your wallet.

It could mean that you're coming down with stomach flu.

So how you react to said "flutter" is pretty much random, isn't it?  If you decide that it's an angel talking to you (or maybe a demon, in the latter-mentioned instance), and your life is being supernaturally guided, all you're doing is putting a wishful-thinking twist on an event that is wildly open to interpretation and almost certainly has nothing to do with anyone trying to communicate with you.

It's a common drive, though, isn't it?  All around us we see chaos, random stuff happening to folks for no apparent reason.  Some good, some bad -- some really bad.  No apparent pattern to any of it.

I was just discussing with a student of mine yesterday how much woo-woo-ism comes out of a rejection of this notion of chaos.  A child is diagnosed as autistic -- the anti-vaxxers want there to be a reason, and settle on the measles vaccination as the culprit.  A loved one develops Parkinson's disease, and you look up into the sky -- and see chemtrails.  A person has severe, life-threatening allergies -- and lays the blame on GMOs.

We don't like it that there are limits to our understanding, that there are aspects of life that we can't control, can't explain.  Chaos, to put it bluntly, is freakin' scary.  How comforting, then, to think that there are angels there beside us -- and that if we just learn to listen hard enough, and want it bad enough, that they can heal us, comfort us, take away our anxieties.

But how callous of people like Doreen Virtue to turn a profit from that desire.
Posted by Gordon Bonnet at 2:51 AM