Captain Odin of the spaceship Valhalla

Last night, I was working out at the gym, and one of the televisions was showing a program about a subject I know and love: Vikings.

My MA is in Scandinavian historical linguistics (yes, I know I teach biology.  It's a long story).  As part of my thesis research I read a good many of the sagas, some in the original Old Norse, the culmination of a passion for the subject I've had since I first found D'Aulaire's Book of Norse Myths when I was in elementary school. 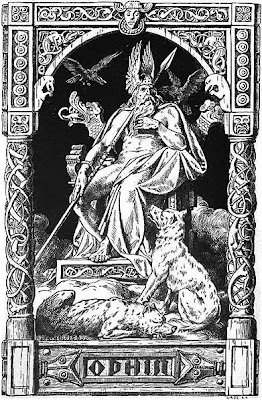 "Odhin," by Johannes Gehrts (1901) [image courtesy of the Wikimedia Commons]

So I was tickled when I saw the program being aired, even though I had a chill run up my spine when I noticed that it was on the History channel.  Given the name, you'd think that the History channel would show programs related to history.  You'd be wrong, although I guess the more accurate name of The Woo-Woo Bullshit channel wouldn't attract sponsors very well.

So I watched the program for a while.  And it turned out to be an episode of...

I'm not making this up.  My first thought was that the contention of the show was that the Vikings were aliens, but it turns out that no, they're not saying that.  That would be ridiculous.

They're saying that the Vikings were helped by aliens.

The show featured a couple of legitimate scholars, Kirsten Wolf of the University of Wisconsin - Madison's Department of Scandinavian Studies (which, coincidentally, is where I took my courses in the Old Norse language) and Timothy Tangherlini of UCLA.  Both made coherent and academically relevant statements regarding the history and culture of the ancient Norse, which were (of course) immediately misinterpreted by the wackos who wrote the narrator's script.

"The Vikings were enormously sophisticated in terms of technology: ship-building, bridge-building, fortress-building," Wolf said, which is true, but then the narrator jumped in with, "But many researchers remain baffled at how the Vikings became so socially, politically and technologically advanced, especially while living in the cold, harsh environment of the North...  Just how were the Norse Vikings able to manage such technological and geographical feats?  Are their fortresses and journeys to unknown continents evidence that the Vikings had access to extraterrestrial knowledge?  Ancient astronaut theorists say yes, and believe the proof can be found by examining the religious beliefs of this mysterious people."

Yup.  Those poor ol' scholars, always "baffled" at how "mysterious" everything is.  Good thing we have raving wingnuts like Phillip Coppens and David Hatcher Childress to weigh in on the situation and rescue us from our ignorance with conclusions such as Thor's hammer being a "kinetic weapon," Odin's ravens Huginn and Muninn being "spy drones," and Odin's seat up on Hlidskjalf being "the captain's seat on a spacecraft." 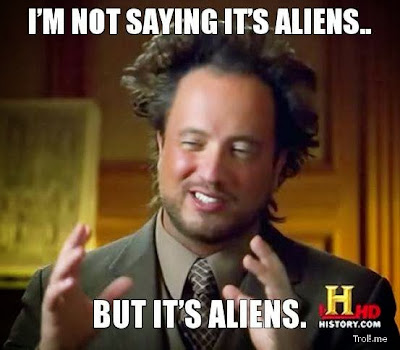 I wonder if it's aerobic exercise to pound your head repeatedly into the wall, because that's what I ended up doing, watching this show.

At least that's better than what Drs. Wolf and Tangherlini most likely felt like doing.  After realizing what idiocy their names had been associated with, publicly, I'm guessing they probably both wanted to commit seppuku.

I kept watching, though, in the fashion of a person witnessing a slow-motion train wreck.  A couple of times, I actually laughed out loud, so it's probably a good thing that the gym was otherwise empty.  One of the best points came when Phillip Coppens explained that the dwarves, mentioned many times in myth collections like the Eddas, were actually...

... the "Grays."  Yup, the same alien creatures we see in such historical documentaries as The X Files and Close Encounters of the Third Kind.  Here's what he said, verbatim, or near as I can recall:


Are they real dwarfs, or somehow more mythical, or whether the label “dwarf” actually stuck to them because they were somehow smaller?  And of course today, we often describe the gray alien archetype as dwarfish as well, simply because they are smaller.

Of course, Philip.  Whatever that means.  And along the same lines, I'm guessing that the trolls were the Vikings' way of describing the "Rancor" from Star Wars, and the elves were invented because J. R. R. Tolkien was a time traveling ultra-intelligent extraterrestrial being who went back to the 9th century and told the ancient Norse about Legolas et al.

But watching this show wouldn't have been the complete experience it was without a commentary from Giorgio Tsoukalos, he of the amazing hair, so I was positively tickled when he showed up.  Tsoukalos had this to say about Valhalla:


Valhalla was not a figment of our ancestors’ imaginations, but it might have been some type of an orbiting space station.  The reason why I’m saying this is because we have a description of Valhalla: it is an incredible description of a place that has weird attributes.

Which is such an amazing feat of logical deduction that I can hardly think of a response, other than to say that my classroom has some "weird attributes" and it is not, so far as I can tell, an "orbiting space station."

At that point, I kind of gave up, stopped staring at the television with my mouth hanging open, and went over to use the weight machines, figuring that even if my brain had been turned to cream-of-wheat, at least I could work on my biceps.

So this, my dear readers, is why I don't watch television, except for when I'm at the gym.  I should have changed the channel, really.  Next time I will -- I'll try to find something more sensible and intellectually stimulating than what the History channel has to offer.

Reruns of Gilligan's Island should fit the bill.
Posted by Gordon Bonnet at 2:48 AM