One thing you have to admire about woo-woos is their persistence.

The "spirit mediums," especially.  They just never seem to give up.  Now, of course, the ones who have the profit motive in mind have a good reason for keeping up the game; it's no wonder that people like Sylvia Browne, Theresa Caputo, and "Psychic Sally" Morgan still insist that their alleged powers are real.  Any sign of hesitancy about whether they really are getting in touch with dear departed Aunt Bertha, even in the face of accusations of fraud, would stop the paychecks from rolling in post-haste.

Still, that doesn't explain a good many of the others, who are really, earnestly trying to contact the other side, for no great gains financially, and despite failure after failure to do so.  To some extent, they're probably powered by wishful thinking, of course.  Who amongst us hasn't wanted to hear from some long-lost loved one, or just to obtain evidence that life goes on after death?

You'd think that year after year, decade after decade, of flimsy evidence at best, would convince even those die-hards.

But no.  Which probably explains why a group in Halifax, Nova Scotia, is meeting again this year on Halloween to try to summon the dead spirit of Harry Houdini. 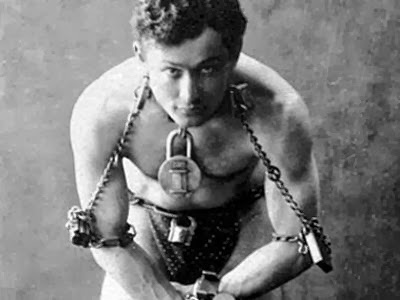 Houdini died on Halloween 87 years ago, in 1926, and (according to the article) a séance has been held every year on the anniversary of his death to see if the famous magician will come back to have a few words with the living.  Leading this year's attempt is Alan Hatfield, a spirit medium from Pictou Landing, Nova Scotia.  "My specialty is EVP — electronic voice phenomena," Hatfield said.  "I've been to the Titanic site twice and recorded voices there and at Deadman's Island and other places through the years."

What is ironic about all of this is that Houdini himself was something of a skeptic.  He started out believing in the afterlife -- according to his biography, William Kalush and Larry Sloman's The Secret Life of Houdini: The Making of America's First Superhero, Houdini first launched into a quest for communication with the dead after he lost his mother, and (perhaps not coincidentally) shortly thereafter entered a correspondence with Arthur Conan Doyle.  Despite Conan Doyle's celebration of the power of logic and rationalism in the person of his most famous character, Sherlock Holmes, he was something of a nut about spiritualism himself, and toward the end of his life got involved in a great deal of woo-woo silliness, most famously the Cottingley Fairies hoax.

So Houdini asked Conan Doyle for some recommendations for good mediums.  Conan Doyle, delighted, obliged.  But after visiting them -- giving them, in my view, their best shot at convincing him -- Houdini was unimpressed.  One of them, Mrs. Annie Brittain -- whom Conan Doyle considered the best of the lot -- was especially disappointing.  "Mrs. Brittain was not convincing," Houdini later wrote.  "Simply kept talking in general.  'Saw' things she heard about.  One spirit was supposed to bring me flowers on stage.  All this is ridiculous stuff."

In the end, Houdini had no honest choice but to become a debunker.  It's the fate of a lot of stage magicians; they know how easy it is to fool people, and are quick to catch charlatans at their game.  The New York Times later spoke about Houdini's "merciless exposure of miracle-mongers who claim to be endowed with mysterious powers," and nominated him for the Seybert Commission, an academic group who studied claims of the paranormal with a skeptical attitude.  He intended to coauthor a book called The Cancer of Superstition with none other than H. P. Lovecraft -- a project that had to be altered because of Houdini's death, with C. M. Eddy taking Houdini's place.

Interestingly, Houdini himself proposed a test of the claim that there was an afterlife.  He proposed to his wife that after his death, if he was able, he would transmit a message to her in code that said "Rosabelle, believe."  The code was known only to Houdini and his wife.  In 1936 -- ten years after his death -- his wife finally gave up, and put out the candle she'd kept burning next to his photograph.  "Ten years is enough for any man," she is reported to have said on the occasion.

Odd, then, that the spiritualists are still at it, 77 years later.  Like I said, they never give up.

Now, understand that I don't know there isn't an afterlife, and there are some claims of hauntings that I find interesting, at the very least.  And no one would be happier than me to find out that death wasn't the end.  (Depending, of course, on which version of the afterlife you go for.  My vote would be for Valhalla, which sounds awesome.)  But it does very much seem like however you look at it, 87 years with no results is a long time to wait before deciding that there's nothing there to see.

So thanks to my friend and fellow blogger, Andrew Butters of Potato Chip Math, for the lead on this story.  And if you're in Halifax on Halloween, see if you can get tickets to the live performance that evening.  I'd love to hear about it.  And who knows?  Maybe this will be the year something will happen.  Hope springs eternal, apparently, especially if you're a woo-woo.
Posted by Gordon Bonnet at 2:33 AM