There's something about water that is mysterious.  It comprises, by some estimates, an average of 65% of the mass of living tissue.  We're drawn to it, and not just because we need a steady source of it to remain alive.  Look at how attracted we are by lakes, rivers, and oceans; consider how much more people will pay for houses with a view of a body of water.

Even the chemists tell us that water is weird.  It has a number of odd properties, including high polarity, specific heat, and heat of vaporization, and is (to my knowledge) the only common substance that expands when it freezes.  (If it weren't for this peculiarity, ice would sink, and bodies of water would freeze from the bottom up -- so there would probably be a permanent ice layer at the bottom of the world's lakes and oceans.)

So I guess it's no surprise that the woo-woos love making claims about water.  It seems like lately I've been seeing more and more of them -- mostly advertisements for devices that allegedly make your water... better.  Or healthier.  Or more nutritious.  Or waterier.  It's hard to tell, sometimes, exactly what they are claiming, because they don't seem all that sure about it themselves.

Take the "MRET Water Activator," offered for sale by the Sound & Consciousness Institute of San Francisco.  Here's the claim:

I don't know about you, but the idea of my water molecules marching along in single file is a little... creepy.  But no worries, because they put you on notice right away that they haven't the vaguest idea what they're talking about:


This device infuses the Schumann Resonance (7.83 hertz) into the water. The Schumann Resonance is an electromagnetic frequency that resonates in our atmosphere between the earth and the ionosphere. It is triggered by lightning, which strikes every second somewhere on the planet. Based on the laws of brainwave entrainment, this frequency entrains every brain on the planet (including animals) into this state, which is right on the threshold of the brainwave states of theta and alpha. In fact, over millions of years, we have become addicted to this frequency and it is a core part of who we are as humans. However, the problem is that this frequency gets obscured in cities by all of the ambient electromagnetism. NASA has found that astronauts actually get sick when they go outside of the atmosphere and don't receive the frequency. Currently, all astronauts now receive this frequency electromagnetically.


This global electromagnetic resonance phenomenon is named after physicist Winfried Otto Schumann who predicted it mathematically in 1952. Schumann resonances occur because the space between the surface of the Earth and the conductive ionosphere acts as a closed waveguide. The limited dimensions of the Earth cause this waveguide to act as a resonant cavity for electromagnetic waves in the ELF band. The cavity is naturally excited by electric currents in lightning. Schumann resonances are the principal background in the electromagnetic spectrum beginning at 3 Hz and extend to 60 Hz, and appear as distinct peaks at extremely low frequencies (ELF) around 7.8 (fundamental), 13.7, 19.6, 25.5, 31.4, 37.3 and 43.2 Hz.

It has nothing to do with brainwaves.  It is not "obscured in cities."  NASA doesn't "give this frequency to astronauts."  And we are not "addicted to this frequency."

Oh, and there's no way to "infuse a frequency" into water.

If you keep reading, though, the claims just get wilder and wilder.  "Activated water" that has been "infused with the Schumann resonance" has the property of "super liquidity."  It's "bio-available."  (As opposed to ordinary water, which is just "available.")  And then after telling you how all of this nonsense has to do with the special properties of water, they tell you you can use their device to "activate" other substances...

...such as oil.  Which last I checked doesn't have much water in it.

If "MRET Activated Water" isn't bad enough, just today I ran into another claim, this one that we should all be drinking water in its "fourth phase."  What the hell could that mean, you might ask?

Well, you all learned in grade school how substances usually exist in one of three states -- solid, liquid, and gas.  (As you'll see in a moment, that is a dramatic oversimplification.)  But these people claim that these phases somehow aren't good enough, that we should be drinking water in a "fourth phase:"

It removes and renders harmless an enormous number of contaminants that are commonly found in water, whether from natural or man-made sources. It then puts water into what scientists are now calling the fourth phase of water (a liquid that has a beautiful, crystalline structure to it).

Ah, yes, those conveniently anonymous "scientists," always ready and waiting to be trotted out to support whatever idiotic claim is being made.

So what, exactly, is this stuff?  Check out the FAQs, and you find out:


4th Phase is a concentrated, water based solution of ionic minerals. The mother concentrate is made by extracting mineral salts from the stone, biotite mica, which are then diluted in purified water, bottled and sold, primarily as a liquid based water purifier. The resulting minerals are in sulfate form rather than the chloride form that most companies offer (The requirement for sulfur is nearly twice the requirement for chloride in the human body).

This, they tell us, comes out of the work of Dr. Gerald Pollack of the University of Washington, who tells us the following:


Dr. Pollack asserts that water, in it’s [sic] maximum potential as a substance that enlivens and hydrates us, needs to be highly energized and it reaches this high energy state through a variety of ways, one of which is that it creates this liquid crystalline structure when it is in the presence of external energy sources like light (sunlight, for example.) When water is in this high energy state, it mimics the water that surrounds our cells and is found throughout the body, and it has many other properties as well.

I'm so relieved to hear that now the water in my body will have many other properties!  That sounds great!  I'd hate to think that my water had "few properties."

What's interesting is how these people are using half-truths, incorrectly interpreted research, and out-and-out falsehoods to sell a product.  For example, the whole premise of a "fourth phase" of water, a mystical and energized phase, ignores the fact that the chemists have known for decades that water can exist in at least eighteen different phases (fifteen solid phases, plus liquid, vapor, and supercritical fluid), depending on temperature and pressure: 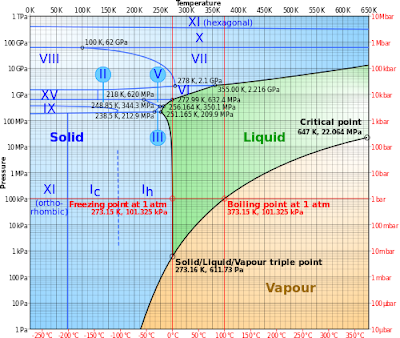 And unfortunately for these claimants, here at sea-level atmospheric pressure and typical room temperature, we're stuck in one boring old phase: liquid.

Now, Dr. Pollack himself, as far as I have been able to find, seems to have some degree of credibility in his field, and has been the author of a good many peer-reviewed papers.  On the other hand, the fault may not lie entirely with the purveyors of "4th Phase" hijacking Pollack's work.  At least one of Pollack's colleagues, neurobiologist Alexander Stein, has given an evaluation of Pollack's research that is nothing short of scathing:


Dr. Pollack is an embarrassment to his field and his University. This book [Cells, Gels, and the Engines of Life] is a collection of old results (from as far back as 50 years ago) that puzzled the world's scientists at the time they were first published. There has been much progress in the intervening decades that Dr. Pollack would do well to read and understand. All of the ancient science upon which Pollack's argument depends has since been explained or refuted. People are entitled to write, or say, whatever they choose. However, that doesn't necessarily make it true. Before purchasing this book, people should browse Dr. Pollack's publication record. They should note that in those instances when his science has escaped the peer-review process, references to his ridiculous opinions about cell biology have been omitted. Prospective buyers should also note that this book was published using the private funds of Pollack's family, and not solicited or endorsed by any scientific organization. I fully support anyone who wishes to read this comedy of ignorance, provided they then turn the pages of a good cell biology textbook. This book may change the way you look at the world around you, but so will psychoactive drugs and head trauma. Pollack is a laughing-stock. He will tell you that he is a persecuted genius. It is important to remember, though, that sometimes people are laughed at because they are genuine fools.

Ouchie.  So suffices to note that Pollack himself may not exactly be the solidest foundation on which to rest your claim.

Now, I'm not a chemist, and I would be unqualified to comment upon Pollack's research into the properties of water; but I do teach biology, and I can say without particular fear of error that the claims of the "4th Phase" people with respect to the biological effects of this Magic Water are bogus.  The bottom line: save your money.  Plain old tap water (in the United States, Canada, and Western Europe, at least) is safe, hydrates you just fine, and has the additional advantage of being cheap.

So, there you have it; yet another example of combining "a fool and his money are soon parted" and "there's a sucker born every minute."  Myself, I think you can solve the whole thing by switching to red wine.  Except... uh-oh...

Tomorrow: Do the antioxidants in red wine actually prevent cancer?  Or do people just like getting drunk?
Posted by Gordon Bonnet at 2:22 AM