In some ways, it's no wonder that people these days distrust everything coming out of the media.

Look, for example, at the whole thing about "antioxidants."  To a lot of folks who are "natural medicines" aficionados, antioxidants seem like the next best thing to an immortality pill.  Consider some of the claims made about resveratrol, an antioxidant that occurs naturally in grape skins (and therefore in red wine).

These antioxidants neutralize harmful free radicals in your body, which can cause certain types of cancer, heart disease, stroke, immune dysfunction, and degenerative disorders such as dementia and Alzheimer's disease. Harmful free radicals are everywhere in our environment, but mostly caused by exposure to pollution, chemicals, radiation, pesticides, alcohol, unhealthy food, and even sunshine.


A new study shows an antioxidant found in red wine destroys cancer cells from the inside and enhances the effectiveness of radiation and chemotherapy cancer treatments.


Researchers say the antioxidant found in grape skins, known as resveratrol, appears to work by targeting the cancer cell's energy source from within and crippling it. When combined with radiation, treatment with resveratrol prior to radiation also induced cell death, an important goal of cancer treatment.


While your health-freak friends spend hundreds of dollars on weird miracle fruit juices, you can sit back and relax. As it happens, your red wine habit might just be the key to staying young longer.

Sounds pretty good so far, doesn't it?  Far as we can tell, the key to a long, healthy life might be inside your next bottle of Cabernet Sauvignon. 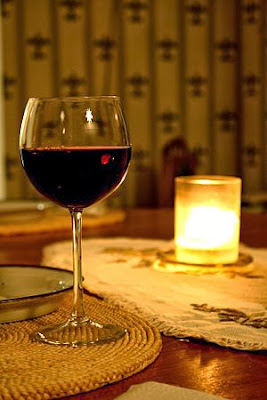 Dig a little deeper, though, and you begin to find that despite the hoopla about antioxidants in general, and red wine in particular, there is far from consensus on the subject.

From a study at the University of Copenhagen:


Researchers from the University of Copenhagen followed 27 men with an average age of 65 who were in good health.  Over an eight-week period, all of the study’s participants performed high-intensity exercises, but half received 250 milligrams of resveratrol each day, while the other half received a placebo.

For the men taking resveratrol supplements, it seemed as though the benefits they received from exercising had been reduced.

"We found that exercise training was highly effective in improving cardiovascular health parameters, but resveratrol supplementation attenuated the positive effects of training on several parameters, including blood pressure, plasma lipid concentrations and maximal oxygen uptake," said Lasse Gliemann, a researcher who worked on the study.

From an article by Harriet Hall, in the online magazine Skeptic:


What happens when we ingest more antioxidants than we need? Is the excess excreted? Does it just sit there doing nothing? Does it do something we didn’t intend? It would be nice to know.

If antioxidants in food do reduce the incidence of those diseases, it’s only logical to think that antioxidant supplements would reduce the incidence even more. Unfortunately, controlled studies have consistently shown that they either have no effect or make things worse. It’s not the first time reality has rudely intervened to spoil a great idea. Study after study has shown no benefit of antioxidants for heart disease, cancer, Parkinson’s disease, Alzheimer’s disease, or longevity.

Well, I don't know about you, but I find that kind of disappointing.  I love red wine (I think it's in my genes, being of French ancestry), and it was nice to think that I wasn't just drinking it because it tastes good, but that it was doing something positive for my health.  Now, it seems like I might have to reevaluate my rationalization for my oenophilia (and yes, that's the real word for the love of wine).

The bottom line is, it's hard to establish health claims with any certainty, simply because human health is so complicated.  We do need some antioxidants; they break down free radicals (also called reactive oxygen species), natural metabolic byproducts that, left unchecked, can damage tissue.  But we not only get antioxidants in our diet, we produce them -- three well-studied ones are peroxidase, catalase, and superoxide dismutase.  Even if we did get some benefit from the antioxidants in red wine, how would we tease that out from the effects of other antioxidant chemicals in our diet (such as vitamin C and lycopene), and the action of our own self-generated antioxidant enzymes?

Not a simple task.  Which is why, unfortunately, the media has tended to cling desperately to the simple answer -- "red wine is good for you."

But it's understandable why this is a popular position, isn't it?

The truth, as usual, is far more complex than that.  And despite my doubts that red wine has any significant benefits to my health -- which is my conclusion, after having read a good bit of the research on the topic -- I'm not going to give up drinking the stuff myself.  I'm of the opinion that a glass of bold California Syrah next to a rare t-bone steak is just about one of the finest things in the world.

Whether or not it extends my life.
Posted by Gordon Bonnet at 2:25 AM