It's the voodoo, I tells you!

I just found something new for the Do-It-Yourself crowd; a how-to for making your own voodoo doll.

The idea of voodoo dolls has been around for a long time, long before honest-to-Baron-Samedi voodoo made its way from Africa into the Caribbean, and later to Central America, South America, and the Gulf Coast.  The whole thing is a kind of sympathetic magic -- creating an image of someone, often incorporating something from the person into the image (hair or fingernail clippings were common), and then doing something to the image in the hopes that the real person would respond in kind.  It was by no means limited to the Afro-Caribbean voodoo tradition; similar practices have been found in many parts of the world.  And like most magic, a lot of it was centered around getting the person in question either to have sex with you or else die.

Funny how those two seem to come up pretty frequently in these discussions.

In any case, the whole concept has been around for a good while.  Consider the following picture of a voodoo doll that is at the Louvre (and I'm using the colloquial name even given that this isn't really voodoo in the strict sense), from 4th century Egypt: 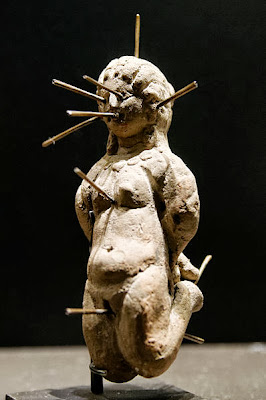 (image courtesy of photographer Marie-Lan Nguyen and the Wikimedia Commons)

Check the pin placement.  Not too difficult to tell what this magician was after, is it?

In any case, we now have a DIY guide if you'd like to try the whole thing out for yourself.  Here are some highlights:

Since this is an authentic method, only naturally available items are used. All you need is two sticks, a string, strips of fabric, adhesive and something to stuff the doll with, such as grass, pine needles, etc. Also, if you want to dress up your doll you will require pieces of cloth, buttons, feathers, etc. Since the doll is intended to resemble a living person, it is best to use that person's own belongings to dress the doll. Once you have gathered the paraphernalia, here's how to make it:

The next step is to baptize the doll in the name of the person you're trying to establish a link with.  You can consult the site for the exact words you're supposed to use.  Your doll is then ready to... um... use.

The writer seems to be having some misgivings at this point, because (s)he cautions, "(R)emember, using a doll for evil purposes has horrible consequences, since the person using the doll may suffer badly and even die for dark voodoo practices.  So you should never use voodoo dolls for anything wrong."  And later, (s)he puts in a rather comical disclaimer -- "Please note that I am not a vodouisan myself and this article is best read for informative purposes only.  Me or All About Occult will not bear any responsibility should you try to use the above mentioned method practically."

Righty-o.  We'll just let you completely off the hook, then.  But being fearless experimentalists, and also considering that the entirety of the foregoing is unadulterated horse waste, we here at Skeptophilia don't have the need for such disclaimers.  In fact, I not only give you my permission, I positively encourage you to make a voodoo doll with my image, and stick it full of pins.  I realize you don't have any of my hair or fingernail clippings (at least, I sincerely hope you don't, as that would be a little creepy), but maybe just having a reasonable facsimile of my fortunately rather unique face will be enough.  My photograph is over there in the right sidebar.  So have at it.  Feel free to skewer me, in effigy, to the wall, and I promise I'll post here to report any ruptured gall bladders or brain aneurysms I happen to suffer.

All in the name of the scientific method, you know.
Posted by Gordon Bonnet at 2:00 AM