Instead, I think I'll discuss a topic that I know is equally pressing to all of you:  What the hell is an "Ummite?"

The question comes up because of a link that a reader sent me, along with the question, "What do you make of this?"  The link turned out to be to the website "Ummo: Ummite Physics and Metaphysics."  And we get an answer to the initial question right away, although all it does is invite more questions:


The Ummites claim to have landed on Earth in March 1950, in the area of Digne. Three crafts brought a crew from the planet UMMO that set up a base (see the summary in the book by J-P PETIT), probably on the Peak of Blache, between Digne and La Javie, in the south of France. They spent a certain time analysing our habits, walked around Paris (and undoubtedly elsewhere), and avoided drawing attention to themselves. In 1965, Mr. Fernando SESMA, the organiser of a slightly esoteric Spanish "association" which claimed to be in contact with other extraterrestrials, begins receiving letters. Other recipients also receive some. Contact is lost in 1970, then is regained in 1987, and continues until 1993 (at least, we do not have letters possibly sent outside these periods) with other recipients, particularly in France. We currently have approximately 200 to 300 pages of texts written by the Ummites but it is possible that many other letters exist. In a 1988 letter, reference is made to the existence of 3,850 pages, copies of which having been sent to several individuals represent the equivalent of 160,000 pages.

So I started to look through the "texts" that allegedly come from the Ummites of Ummo, and were treated to passages like the following:


During a conversation which you had with my brother on which I depend: DEI 98, son of DEI 97, you asked him for information about travel and the concept of SPACE. The topic is complex as you shall see in the documents that we will give you gradually. Of course, before describing the types of feelings we feel when we travel in a OAWOOLEA UEWA OEMM (lenticular vessel for intra-galactic displacement) it is better that you have a more precise idea of our concept of SPACE.

Until now in the many reports and conversations, we had spoken about the IBOZOO UU without explaining their meaning, and had limited ourselves to translating this phoneme by "PHYSICAL POINT." We also resisted the temptation to add a mathematical demonstration closer to our WUUA WAAM (mathematics of physical space), because that would require an initiation on your part to the to our UWUUA IEES (tetravalent mathematical logic); it is to the detriment of the scientific rigour of the concepts that we expose to you.

I was particularly interested in the "tetravalent mathematical logic" part, though, because logic is kind of a special interest of mine.  And a little further along, I found an explanation of it, if you can call it that:


There is a reason: when it comes to analysing the properties of space, the normal postulates of mathematical logic, which is familiar to you and to us besides, are not useful to us. As you know, formal logic accepts the criterion you name "law of of non-contradiction" (according to which any proposal is necessarily true or false). In our WUUA WAAM (mathematics of Physical Space) this postulate must be rejected. One then has recourse to a type of multivalent logic that our specialists call UUWUUA IES (logical tetravalent mathematics) according to which any proposal can adopt four values indifferently:

- AIOOYA AMMIE (can be translated: True outside from The Waam)

So not only do these aliens not use Earth logic, they also apparently speak the same language as Charlie Brown's teacher in the Peanuts cartoons.

I also found an artist's rendition of an Ummite, which I know you'll all want to see: 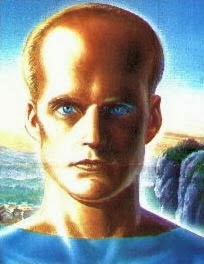 So the Ummites look, basically, like Jean-Claude van Damme.

Now, so far, all we have is a wacky idea, and as we've seen over and over in this blog, wacky ideas are plentiful out there.  What impresses me is how massive this wacky idea is.  There is page after page of prose like this:


To say that the IBOZOO UU are like small spheres or " that between them exists a vacuum " or that they "are tangent within a dense space filled with IBOZOO UU," does not make sense. Such mental images are those which appear to an UUGEEYIE when one speaks to him for the first time on UMMO about the design of SPACE composed by the IBOZOO UU. Its childlike mentality, accustomed to familiar perceptions, tends to materialise this concept of IBOZOO UU and to assign an existence to it.

So someone -- perhaps J.-P. Petit, the French gentleman whose name is associated with the first "contact" with the Ummites, decades ago -- actually had to sit down and write hundreds of pages of this stuff, with all sorts of formulas and diagrams (you should check out the mathematical parts; I minored in math and my eyes crossed after the first paragraph).

We're talking about wingnuttery on a significant scale, here.

Anyhow, I encourage you to go to the link and look around.  It's well worth glancing through, even though most of it falls into the "clear as mud" department.  And as to whether any of it could be true, or even sane, my general reaction is "AIOOYEEDOO."

So thanks to the reader who sent the link, but in answer to the initial question, "What do you make of this?", I'm not entirely sure.  It's impressive, I'll say that, but beyond that, I was just kind of left shaking my head in disbelief.

Which, now that I think about it, is the same way that I responded to the current nonsense going on in congress.
Posted by Gordon Bonnet at 2:23 AM