Lord Dufferin and the man in the garden

For better or worse, being a skeptic doesn't mean that you don't find stories of the paranormal interesting -- nor that you can't react to them on an emotional level.

I mean, I'm the guy who thinks that television programming went into a nosedive the day The X Files was cancelled.  I am also the guy who would love to spend a night in a haunted house, but would be likely to piss my pants and then have a stroke if anything untoward happened.  So while I'd be a good guy to have on a team of ghost hunters, from a scientific and rational perspective, I'd be a bad choice from the standpoint of practical application and laundromat charges.

I still recall many of the ghost stories of my childhood.  My uncle was a grand storyteller, and had lots of tales (usually told in French) of the scary creatures of the Louisiana bayou, including the Loup-Garou (the Cajun answer to a werewolf) and Feu Follet (the "spirit fire," or will-of-the-wisp, which would steal your soul if you saw it -- unless you could cross running water before it caught you).  Later, I voraciously read Poe and Lovecraft, and dozens of books with names like True Tales of the Supernatural.

It was in one of the latter that I ran into the story of Lord Dufferin, a 19th century British statesman who spent most of his career shuttling all over the world -- from Canada to Syria to Russia to India to Burma.  His actual name was Frederick Hamilton-Temple-Blackwood, 1st Marquess of Dufferin, and his life coincided almost perfectly with Queen Victoria's -- she lived from 1819 to 1901, Dufferin from 1826 to 1902. 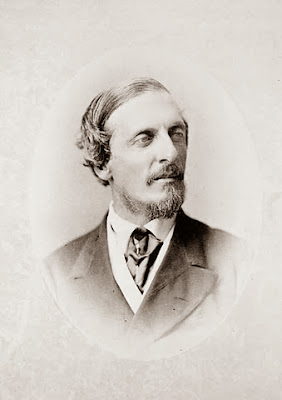 Dufferin was, by all accounts, well known in the social circuits of high society.  His biographer calls him "imaginative, sympathetic, warm-hearted, and gloriously versatile."  He also was an excellent storyteller, and there was one story he became famous for -- mostly because to his dying day, he swore that it was true.

One night, Dufferin said, he was visiting a friend who owned an estate in Ireland.  For some reason, he was unable to sleep, and after tossing and turning for a while, he finally got up and went out through a door and onto the balcony overlooking the estate gardens.

He became aware that there was a figure moving down in the garden, and as he watched, the figure got closer.  It was a man, carrying something on his back, but he was in shadow and it was impossible to tell anything about the man or his burden.  But after a moment, the man stepped out into a patch of moonlight, and looked up at Dufferin.

Dufferin recoiled.  The man was the most hideously ugly individual Dufferin had ever seen -- and the object on the man's back could be clearly seen to be a coffin.

Terrified, Dufferin retreated to his room.  The next morning, he told his host about what he'd seen, and Dufferin's friend brushed him off -- there was no one in the garden the previous evening, the friend said.  It must have been a nightmare.

Dufferin more or less forgot about the incident.  But many years later, when he was British Ambassador to France in the early 1890s, he was in Paris for a diplomatic meeting and was about to step onto an elevator when he glanced at the elevator operator, and saw that it was the same memorably ugly face as the man he remembered from his vision in the garden.  Alarmed, he backed away, and the door closed.  He was standing there, trying to make sense of what he had just seen, when there was a tremendous crash -- the elevator cable had broken, sending the elevator compartment hurtling down the shaft.  Everyone inside, including the operator, was killed.

Dufferin sought out hotel officials to ask about the elevator operator -- but the officials said that the man had just been hired that day, and no one knew anything about him.

Dufferin lived for another ten years, and enjoyed many a glass of brandy over the telling of this tale.  And you can see why; it's got all of the elements -- a terrifying vision that turns out to be a warning of danger, a scary-looking guy carrying a coffin across a garden at night, a near brush with death.

Now, don't get me wrong.  I doubt very much if the supernatural aspects of this story are true.  Human memory is a remarkably plastic thing, and I strongly suspect that most stories of precognition rely on imperfect recollection of the original premonition, be it a dream or (as in this case) a vision.  That Dufferin saw something in the garden that night is possible; that he had a nightmare is also possible.  That it was true precognition, I seriously doubt.  It is far more likely that, years later, a shock like seeing an ugly guy in an elevator, and narrowly escaping being killed when the elevator cable broke, would have conflated in his mind the incident with the earlier nightmare (or whatever it was).

But you have to admit that despite all of that, it makes a hell of a good story -- even one that a diehard skeptic might read with a cold shudder twanging up the spine.

And with that, I'll wish you all a very spooky and fun-filled Halloween.
Posted by Gordon Bonnet at 2:31 AM