I'd really like to understand better what drives people to embrace divination.

Well, not why, precisely.  To some extent, I get why.  People are anxious about the future; they want to know what is in store for them.  They want to understand their family members, lovers, friends, and themselves better.  I can certainly empathize with the desire to get information about matters that are hidden or inaccessible or mysterious.

What I don't get is how people can actually think that it works.  I mean, take the most common divination tool -- astrology.  Whenever I hear someone try to explain how astrology works, often using quasi-scientific terminology, I can't help but laugh at how ridiculous it all sounds.  Astrology, Tarot, palmistry, the I Ching, and more obscure forms -- casting runes, looking at the entrails of slaughtered animals, throwing down handfuls of bones or sticks and reading the patterns -- none of them have ever seemed to me to have the slightest connection with reality.  All rely on a combination of wishful thinking, confirmation bias, and dart-thrower's bias for their (seeming) successes.

Today, however, I ran into one I'd never heard of before.  Called Tung Shing (or Tung Shu), it's a divination method that tells your future based on the position of moles on your face.

Myself, I just thought that moles were little unsightly blobs of melanin, harmless at best and harbingers of skin cancer at worst.  But little did I know that there's a whole school of divination that determines your fate based upon your particular collection of birthmarks. 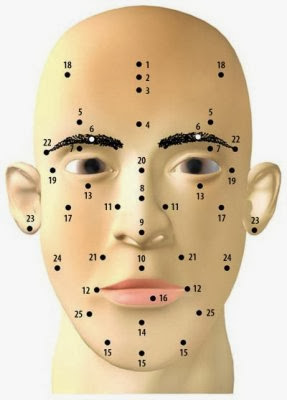 For example, a mole at position #4 (low center on the forehead) tells you the following:


You are an impulsive person, often acting with a flamboyance that gives you charisma and a sparkling personality, but you can be difficult when there are too many opinions. You tend to be rather argumentative, but never to the point of holding grudges. This mole tends to give you an explosive temper and should you decide to remove it, you will find yourself becoming calmer and more at peace with the world.

So not only do the moles tell you about your personality -- but unlike other forecasts of your fate, this one is something you can change with a half-hour visit to the dermatologist.  Reminds me of the line from the wonderful Laurie Anderson song, "The Monkey's Paw:"  "Oh, I went into the Body Shop, and I said to the guy, 'I want stereo F/M, and stars on my teeth; and take this mole off my back, and put it on my cheek!  And while you're at it, why don't you give me some of those high-heel feet."

Little did Laurie imagine that by doing that, she'd be adding a spot at position #24, which would change her as follows:


You will achieve fame and fortune in your young age and you are advised to use this period to safeguard your old age, as people with moles here tend to have a harder life as they get older.

So that sounds pretty good.

And of course, I'm sure you're all wondering about where I fit in with all of this.  I have a mole underneath my right eyebrow, at position #7.  So let's check the Tung Sheng:


Moles under the eyebrows indicate arguments within the extended family that cause you grief and unhappiness.  This will affect your work and livelihood.  It is advisable to settle any differences you have with your relatives if you want peace of mind to move ahead.

Actually, I'm not really worried.  For one thing, I get along with my extended family pretty well, at least the ones who don't mind my eccentricities.  For another, I'm of the general opinion that divination is nonsense.  However nice it would be to get a bead on the future from cards or bones or lines on our palms or moles on our faces, any "information" we'd get that way that wasn't simply wrong would be so sketchy and vague as to be useless.   You'll find out about the future soon enough anyway -- you'll just have to travel into it at a rate of one minute per minute, like everyone else.

Allegedly, the Tung Shing also tells you how to find out the weight of your soul, although I haven't been able to find out any details of how it's done.  But regardless, that's just cool.  I wonder, do all souls weigh the same?  Is having a big soul genetic, kind of like the big-nose gene that seems to run in my family?  Or do devout people have more massive souls?

If that's true, we might need a pretty sensitive scale to measure mine.
Posted by Gordon Bonnet at 1:39 AM