My friend and fellow blogger Andrew Butters (of the wonderful blog Potato Chip Math, which you should all check out) recently sent me a couple of links that are interesting by virtue of what they almost certainly won't accomplish.

Jesus Diaz, writing for Gizmodo, tells about a question he asked to Grey Hautaluoma, of the NASA Department of Public Affairs.  Diaz asked if the Lunar Reconnaissance Orbiter was going to be taking photographs of the lunar landing sites.  Hautaluoma responded, "Yes, it will. We don't have a timeline yet for viewing the Apollo sites, but it will be in the near future."

And Diaz, in his Gizmodo piece, said, "Suck it up, conspiracy theorists, because soon your cuckoo stories about the US simulating the Moon landings will be over forever."

And sure enough, eventually the LRO did get photographs sharp enough to do that.  Here is one: 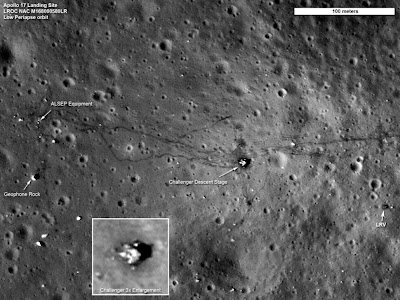 The problem is, there is no way this is going to silence the conspiracy theorists.  Nothing will.

There is a saying that is widely used amongst skeptics, that "you can't logic your way out of a position that you didn't logic your way into."  Now, let me be up front that I don't think that's always true.  Logic, and inductive reasoning, are marvelous ways to bootstrap yourself up out of error, and none of us came into this world pre-fitted with a logical view of the world.  Erroneous ideas, after all, are easy to come by -- our perceptual apparatus is notorious for getting it wrong, and between that and wishful thinking out of fear or desire, it's no wonder we sometimes don't see the world as it is.

But the aforementioned cliché does get it right in one sense; if on some level you don't buy logic and evidence as the sine qua non of understanding, then you and I aren't even speaking the same language.  It's why it is generally futile to argue with the devoutly religious.  Faith is, at its heart, not a logical process.  We're not accepting the same basis for how you "know" something, and pretty quickly the argument devolves into either pointless bickering or "well, you can believe what you like, of course."

And the same is true of conspiracy theorists.  Theirs is a different non-logical basis for understanding, but as with the devoutly religious, it has little to nothing to do with evidence.  The foundational idea for the conspiracy theorists is that there is a giant disinformation campaign on the part of Someone (the government, the Illuminati, the Reptilians, the Russians, the Muslims, the Vatican, the Jews -- or some combination thereof).  Because of that, you can't trust anything that comes from them or from anyone in cahoots with them (which, after all, could be anyone).

After that, there is nothing you can do.  Nothing will ever convince them, because any evidence you bring out -- such as the above photograph of the Moon's surface -- will be judged as altered, Photoshopped, faked.  If you claim that you've analyzed the photograph and it shows no signs of having been doctored, the response is, "They're a pretty clever bunch, those Conspirators."  If you insist, you're considered a dupe or a pawn.  If you really insist, you must be... one of them.

With the conspiracy theorists, you can't demonstrate anything.

So the LRO photographs, unfortunately, haven't accomplished much, and the Moon-Landings-Were-Faked crowd is still going strong.  I continue to hope that one day they'll give it up and admit their mistakes, but the only way that will happen is if they change their criterion for belief to "whatever the evidence supports."

It could happen, but I'm not holding my breath.
Posted by Gordon Bonnet at 2:26 AM