Obi-wan... has taught you well.

Try and guess what the seventh-largest claimed religion in England is.

Ready for the answer?  It's "Jediism."

Yes, you read that right.  Jedi.  As in Star Wars.  People around the world are, in increasing numbers, claiming to be Jedi Knights. 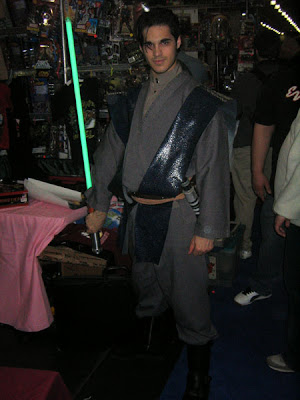 According to a recent investigation by Details' Benjamin Svetkey, there are now Jedi training camps springing up around the world.  He knows because he visited one, in Norris, Texas, where he witnessed a "knighting" of a former "padawon" named Ally Thompson.  Thompson, a 28-year-old Iraqi war veteran, has been studying for years to achieve her knighthood.

"No, we don't worship Yoda," she told Svetkey.  "And telekinesis is not something that we necessarily do - at least not like in the movies.  But I won't deny that the Force is very present in our teachings. Some people call it magic.  Some call it Ashe.  The scientific community calls it energy.  But it's everywhere.  You can find it in the Bible.  When Moses parted the Red Sea - how did he do that?  With energy.  With the Force."

Oddly, given our penchant for embracing bizarre belief systems, there are only 5,000 Jedi in the United States.  I'm not sure if I should be happy or upset about that.  But I will say that one of the most popular training programs for Jedi, The Temple of the Jedi Order, is located in Beaumont, Texas.

If you visit their website (which I highly recommend), you can learn what they're about.  Their mission statement (as it were) runs as follows:

In the Force, and in the inherent worth of all life within it.
In the sanctity of the human person. We oppose the use of torture and cruel or unusual punishment, including the death penalty.
In a society governed by laws grounded in reason and compassion, not in fear or prejudice.
In a society that does not discriminate on the basis of sexual orientation or circumstances of birth such as gender, ethnicity and national origin.
In the ethic of reciprocity, and how moral concepts are not absolute but vary by culture, religion, and over time.
In the positive influence of spiritual growth and awareness on society.
In the importance of freedom of conscience and self-determination within religious, political and other structures.
In the separation of religion and government and the freedoms of speech, association, and expression.

And I can't honestly argue with any of that.  Frankly, I'd be willing to accept a belief in the Force in exchange for everybody in the world abiding by those rules.

Still, I can't help but find the whole thing a little... silly.  It's kind of like what happens when Civil War reenactors and members of the Society for Creative Anachronism let their fantasy life take over.  I mean, the people who created Star Wars were up front that it was fiction -- not just the story, but the Jedi Order and the religious trappings and all.  So sorry, but I don't think I'll be donning brown robes and trying to learn how to handle a light saber any time soon.

On the other hand, it's not the first time that a religion has sprung from science fiction.  I'm lookin' at you, Scientologists.  And I'll take the Jedis over those wackos in a heartbeat, given the latter's history of coercion, secrecy, abuse, and fraud.  (And lest you think I'm overstating my case by the use of the last word, the French government delivered a serious blow to the Church of Scientology just last week, when a court upheld a 2009 fraud conviction for victimizing vulnerable followers.)

And since I'm an atheist, it's no surprise that I pretty much have the attitude that all religions were, originally, human inventions, so honestly, Jediism is no worse than the rest of 'em (and a damn site better than a good many).

So my general response is: let the Jedis have their fun.  It doesn't seem to be harming anyone.  And who knows?  If a Death Star shows up one day and a deep, booming voice threatens to vaporize planet Earth, the Jedis may well be Our Only Hope.
Posted by Gordon Bonnet at 4:24 AM