There are two reasons that conspiracy theorists drive me crazy.

One is that they consistently accept weird, convoluted explanations for events just because those explanations favor their twisted notions about the way the world works, simultaneously ignoring a simple, rational explanation that fits all of the available evidence.  This anti-Ockham's-razor approach runs counter to any reasonable logic, but they embrace it with a vehemence that is often scary.

The second is that they're damn near impossible to argue with.  Present a counterargument to their favored theory, and you're deluded.  Laugh at them, and you're a "sheeple."  (Wait, isn't "sheeple" plural?  What's the singular, then?  "Sheeplum?")

Come up with a really good counterargument, and you must be one of... Them.

Take, for example, the article that hit the conspiracy site Liberty Federation this week about some military boats that were seen in a river near Slidell, Louisiana.  There's a video, with the tagline, "Is this part of some kind of drill or is it just normal now in the new Amerika to see armed troops patrolling public canals?"

Right.  "Amerika."  *wink, wink, nudge, nudge*  Of course it's the military wing of the New World Order, practicing their takeover maneuvers.  Merely requiring that you ignore the fact that the Naval Small Craft Instruction and Technical Training School, which has been operating there for decades, is only five miles away.

So yeah, this really was just a drill, and the guys really were just ordinary military guys, which one of the commenters on the post pointed out:


We have a unit down there, been training in that area for close to 20 years. Not sure how that guy has never seen them before, we run all over the rivers and marshes (and Lake Pontchartrain) constantly. Completely normal training, guys are preparing for overseas deployment, has nothing to do with the conspiracy BS being spouted below. Not sure why they are transiting through such a populated area, we normally stay farther away from areas like that for various reasons.

Well, one reason is probably that when they don't, the conspiracy theorists start honking like mad.  To wit, the following response:


so what is next
shoot shoot You Americans , b.o."s agenda – to a " T " , e. holder is doing flips inside of the west/wing knowing that he is get’’n closer to controlling the whole kitten-ka-bouttle then any A.G. ever – even though it is so Un-American that it is sickening to the stomach – this is this administrations agenda , People wake the " F " UP ^ , this is Your Nation dying at a tic-toc and a tic-toc , Yes , What can We do – Do You not see that every time this administration wins in court or by a legislative mark of the pen , It is always very controversial and they will win it by – chicago bullitics – each and every time – what is it that they (this administration) could/and/would hold against You or Your’s , People it is get"n to be to that close of lose for Us Americans that Yes it could come down to You and what You had said and/or done and You may or/may not feel it was wrong , they (this administration) will find the wrongs and put the blame on You or one of Your loved One’s , People We have the devil in Our House and they know what You have forgotten , As little or as simple it was or is to You , They will see to it that it can make the difference of being a representative of the People ’ or NOT being a representative of the People , This administration is so damn evil that the devil HimSelf has to step-back and try to figure out where the evilness comes from – Since this devil himself knows what is in the winners package – There is Not enough wrapping paper and/or ribbon to put this in a package and say (F^ck You say’s Da devil) wel-come to da jungle where obama loves to be , he feels so much at home that he sends the tranny away – why would you need another pointer when ya have the likes of me – and this is coming from the one that has the wife of an tranny – oh baby it is the stiffy that gets me (says b.o.) fur — sure

I feel like this should come with some sort of Rosetta-Stone-like translation, don't you?  We need someone like the little old lady from the movie Airplane: 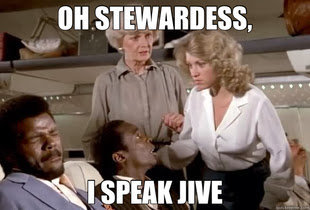 So, I feel duty-bound to do my best, here, although my Dumbassian is kind of rusty.  But here's my best shot at a translation of the above:


I dislike President Obama because I think that his agenda is to target American citizens, and perhaps kill them.  Attorney General Eric Holder is certainly part of this, and is so excited by the prospect that he is engaging in gymnastics.  Gosh, this sure makes me nauseated!  I wish that more Americans would be aware of their surroundings.  Every time this administration wins a court case, it angers me.  It is like what happens in Chicago.  President Obama knows when you are sleeping, he knows when you're awake!  He knows if you've been bad or good, so be good or his thugs will murder you and your entire family!  Even Satan is appalled by how evil this administration is.  Satan would like to wrap this administration up with wrapping paper and give it as a gift.  Also, I believe that because President Obama is an African American, he would prefer to live in a tropical rain forest biome.  And his wife is a hermaphrodite.  Oh, my, yes.

So okay, maybe it doesn't make any more sense when you put it in standard English.

I live in hope, however, that the sensible people outnumber the conspiracy theorists, a hope that is bolstered by sites such as the Conspiratard subreddit, which exists solely to ridicule the ideas of people like our above marginally-coherent friend.  I also hope that the majority of the 191,000 who have subscribed to Conspiracy are only amused bystanders, much the way I listen to Alex Jones or read the columns written by Ann Coulter.

So, yeah, I'm an optimist.  It's a dicey proposition, sometimes, but still better than the alternative.

Even here in "Amerika."
Posted by Gordon Bonnet at 2:51 AM