The problem with Michele

Today I'm going to ask two questions that are probably going to rub some people the wrong way:

1)  Does there come a time when a political figure's statements become so completely loony that they should be removed from public office?
and
2)  Is there a point where "being religious" crosses the line into being a mental illness?

If the answer to both of those is "yes," then it seems like Michele Bachmann may be the index case. 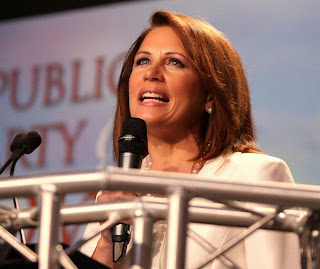 (Photograph courtesy of the Wikimedia Commons and photographer Gage Skidmore)

She's already distinguished herself by making statements that are completely batshit crazy, to wit:


About President Obama:  "He has a perpetual magic wand and nobody's given him a spanking yet and taken it out of his hand."

About natural disasters:  "I don't know how much God has to do to get the attention of the politicians. We've had an earthquake; we've had a hurricane. He said, 'Are you going to start listening to me here?'"

About the men who framed the Constitution:  "We also know that the very founders that wrote those documents worked tirelessly until slavery was no more in the United States."

About gay rights:  "And what a bizarre time we're in, when a judge will say to little children that you can't say the pledge of allegiance, but you must learn that homosexuality is normal and you should try it."

On climate change:  "[Pelosi] is committed to her global warming fanaticism to the point where she has said she has even said she is trying to save the planet. We all know that someone did that 2,000 years ago."

On minimum wage:  "If we took away the minimum wage — if conceivably it was gone — we could potentially virtually wipe out unemployment completely because we would be able to offer jobs at whatever level."

But now, she seems to have crossed some kind of threshold of insanity in a recent interview on the Christian radio show Understanding the Times.  She implied that President Obama is Muslim (he isn't), and that he's working hand-in-glove with Al Qaeda in Syria (he isn't), but it only got worse from there.  Here's the relevant quote:


This happened and as of today the United States is willingly, knowingly, intentionally sending arms to terrorists.  Now what this says to me, I’m a believer in Jesus Christ, as I look at the End Times scripture, this says to me that the leaf is on the fig tree and we are to understand the signs of the times, which is your ministry, we are to understand where we are in God’s End Times history.

Rather than seeing this as a negative, we need to rejoice, Maranatha Come Lord Jesus, His day is at hand.  When we see up is down and right is called wrong, when this is happening, we were told this; these days would be as the days of Noah.

I'll say, as I've said before, that I have no issue with people believing what they like, as long as they don't try to push their beliefs on others, or decide that it's okay to lop folks' heads off with a machete if they disagree.  But... this woman is an elected official.  She helps to frame policy.  She is speaking publicly, and influencing people.  For cryin' in the sink, she is on the House Intelligence Committee, which should somehow have made it into Alanis Morissette's song about irony.

And there she still sits, babbling on about leaves on fig trees and End Time Prophecies and the days being like the days of Noah (not to mention basically making up her "facts" as she goes along; I swear, if the woman said the sky was blue, the probability of it being some other color is nearly 100%).  A lot of her detractors just laugh -- there are whole websites dedicated to "crazy things Michele Bachmann has said."  But at some point, don't we have to say, "Okay, time to step down and get some psychological evaluation?

Allow me to point out that 9/11 was perpetrated by Saudi nationals who had been living in Afghanistan.  But one Scary Mooslim is pretty much like any other Scary Mooslim, right, Michele?

Now, I'm the first to admit I'm no expert in politics.  It's why I tend to stay out of political discussions entirely, except where they cross into areas I do know something about (such as evolutionary biology).  But we seem to have here an example of someone who has so clearly lost whatever grip on reality she ever had that she is unfit for public office.

I know it can't be easy to remove someone from an elected position, especially since she hasn't done anything explicitly wrong except for being a complete wackmobile.  And the good news is that I learned on her website that she won't be seeking reelection.  But heaven help us, that leaves another year's worth of damage to our global reputation that she can potentially do.

Makes you almost pine for the days of Ronald Reagan, doesn't it?
Posted by Gordon Bonnet at 2:38 AM