Aliens in the family tree

A frequent contributor to Skeptophilia sent me a link a couple of days ago with the note, "More grist for your mill."  As soon as I looked at the website address, I knew it was gonna be good, for two reasons.

The first is that the link was from The Daily Mail, a "news" source so sensationalized and tripe-filled that a lot of people call it The Daily Fail.  It seems to have replaced The National Enquirer as the go-to spot for information about celebrities, political sex scandals, and UFO sightings.

The second was that the title of the article was, "Humans Do NOT Come From Earth." 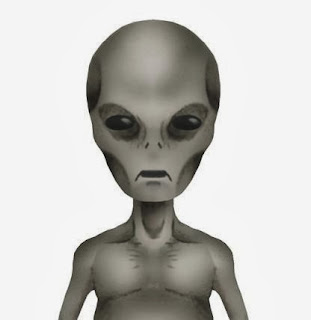 Upon opening the link, we find that a gentleman named Ellis Silver has written a book, coincidentally given the same title as the article.  Silver himself is a Ph.D.  How do I know?  Because on his book cover, which shows a picture of the Earth with Photoshopped black alien eyes, he calls himself "Ellis Silver Ph.D."

I'm always a bit put off when people do this.  It's a bit of a recursive appeal to authority.  My feeling is that if your ideas stood on their own merits, you wouldn't need to brag about your degree -- and that if what you're saying is ridiculous, the fact that you have a degree doesn't somehow make it sensible.  I wasn't able to find where his degree was from, but most of the sites that mention him call him "an American ecologist," so I suppose that must be what his doctorate is in.

Be that as it may, the review in The Daily Mail begins thusly:


A U.S. ecologist has claimed that humans are not from Earth but were put on the planet by aliens tens of thousands of years ago.

Dr Ellis Silver points to a number of physiological features to make his case for why humans did not evolve alongside other life on Earth, in his new book.

They range from humans suffering from bad backs - which he suggests is because we evolved in a world with lower gravity – to getting too easily sunburned and having difficulty giving birth.

Dr Ellis says that while the planet meets humans’ needs for the most part, it does not perhaps serve the species’ interests as well as the aliens who dropped us off imagined.

Well, this tells me two things right off: (1) Silver doesn't understand how evolution works; and (2) he hasn't spent much time looking at the problems other animals have.

Evolution is, at its heart, the law of "whatever works."  The fact that we are the only primate species that stands upright for long periods is what has resulted in our lower back problems -- our spines, which have the characteristic gentle s-bend in the middle, are a brilliant way to carry weight if you support yourself on your knuckles, but don't work so well if you are standing up.  (When was the last time you saw a front porch supported by a curved pillar?)  But the problems such a design engenders were, apparently, outweighed by the advantages conferred to our distant ancestors -- seeing further over tall grass and leaving our hands free to manipulate tools being two probable ones.

Secondly, we are hardly the only species that has trouble managing the vagaries of its environment.  Every species has traits that can backfire, or work well in some contexts and not so well in others.  Even the lowly brine shrimp of Great Salt Lake die by the millions of osmotic shock every time there's a sudden snow melt and subsequent influx of fresh water.

Maladaptive traits can exist for a variety of reasons.  One possibility is that they once were beneficial, but aren't any longer because circumstances changed -- a so-called "evolutionary misfire," like moths and other insects circling around light bulbs and ultimately getting fried.  (This behavior apparently originates from insects using distant light sources to navigate at night, and that strategy being confounded by nearby light sources.)  Others, like the peacock's unwieldy and cumbersome tail, probably evolved because of sexual selection pushing a trait to the point that it becomes a hindrance.  Still others crop up because of pleiotropy -- the fact that a single gene can have several different phenotypic manifestations, each carrying their own advantages and disadvantages.  The gene that causes seal-point coat color in Siamese cats, for example, can result in their having crossed eyes. 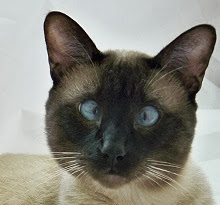 But Dr. Silver discounts all of the hundreds of examples of evolutionary compromise and outright maladaption in nature, and claims that humans are "the only ones who have these problems."  And his answer, according to The Daily Mail:  "He suggests that Neanderthals such as Homo erectus were crossbred with another species, perhaps from Alpha Centauri, which is the closest star system to our solar system, some 4.37 light years away from the sun."

Right.  "Neanderthals such as Homo erectus."  Which were two entirely different species, making that statement a little like saying, "Pigeons such as eagles."  And somehow, an alien species coming from an entirely different star system would have DNA that was compatible enough to proto-hominids (whatever species they were) that they could produce offspring at all?

Funny, isn't it, that there is a 98.7% overlap, genetically, between humans and our nearest relatives, the bonobos?  And that our bone structure shows 100% homology with other primates?  And that we give every evidence, in every respect, of being perfectly ordinary terrestrial animals, without a drop of green extraterrestrial blood?

Of course, this hasn't stopped woo-woo websites from picking up the story, and giving Dr. Ellis Silver Ph.D. all sorts of undeserved attention.  Besides his appearance in The Daily Mail, Silver has made Prison Planet, Above Top Secret, UFO Sightings Hotspot, Unexplained Mysteries, and a host of other "news" sources even less reputable.

Oh, and I forgot to mention why Silver thinks all of this happened.  "One reason for this," Silver says,"is that the Earth might be a prison planet, since we seem to be a naturally violent species and we're here until we learn to behave ourselves."

Well, that certainly seems to be working out well, doesn't it?

You know, I think this sort of thing springs from the same desire that drives a lot of the religious attitudes toward humanity vis-à-vis nature -- that we humans are somehow different, special, set apart.  I still see it in my biology classes, in which even bright kids will use phrases like "humans and animals," as if humans weren't animals themselves.  So I guess if you don't get your sense of species superiority from being a Unique Creation of God, you have to get it from being the Progeny of Aliens.

So that's our journey into the far side for today.  It's not, mind you, that I have any particular objection to the conjecture that life may exist elsewhere in the universe -- in fact, I think that to be so likely as to be a near certainty.  I just think that the chance of their being our great-grandparents contradicts everything we know about biology, human and otherwise, and that's even taking into account how odd my own family can be at times.
Posted by Gordon Bonnet at 5:19 AM