Cows are from Mars, wheat is from Venus

There are some types of woo-woo thinking that I can at least understand.

Let's take one of my favorites, which is Tarot card divination.  While my general attitude toward it is that there is no possible way it can work, you can see why someone might think that it does.  If you enter a Tarot card reading with the opinion that it's going to tell you something mystical and important, you will tend to interpret whatever the cards show in that light, giving greater weight to information that supports your assertion and less weight to information that contradicts it.  This confirmation bias, then, leads you to stronger and stronger belief in an incorrect model, unless you are consistently on guard against the natural human tendency toward it.

Add that to the fact that most divination is done, for pay, by people who are skilled at reading their clients' body language, and tailoring their spiel based upon the reaction they're getting -- so it's no wonder that they come off sounding convincing.

So these sorts of things might be wrong, but at least they're understandable.

What I don't get at all is when people take a bit of real information, and derive from that information a completely ridiculous explanation.  This Ockham's-Razor-in-reverse approach, as I've commented before, is the basis of a lot of conspiracy theories.  But just this past weekend, my cousin in New Mexico, who has been the source of many wonderful topics for Skeptophilia, told me about an example of this phenomenon that may be the best I've ever seen.

Health and nutrition magazines, books, and websites have seen a great deal of buzz lately about the dangers of gluten in food, and not just for people who have the devastating (and easily diagnosed) condition called celiac disease or celiac sprue.  There is a contention, gaining ground especially amongst the proponents of the so-called "paleo diet," that gluten is bad for everyone, and that we all would benefit from eliminating it completely from our tables.

The trouble is, there's no good diagnostic test for "Non-Celiac Gluten Sensitivity" (NCGS), which leads to the problem that it's hard to separate it from other disorders with rather vague, diffuse symptoms, not to mention chronic hypochondria.  Look, for example, at this article at Natural News called "Six Signs You Might Have Gluten Sensitivity."  Damn near all of us have some of the symptoms on the list, so without critical consideration, we might assume that we were gluten sensitive.

Now I hasten to add that I am quite sure that NCGS is a real thing; two recent controlled studies (available here and here) looked at the phenomenon closely, and although neither was able to determine a usable clinical diagnostic protocol for it, remember that the same was true for years for such disorders as fibromyalgia and chronic fatigue syndrome, both of which are now fairly well accepted as valid diagnoses.

But because NCGS is still out of the reach of conventional medicine to diagnose, it does leave people free to decide for themselves what the reason for it might be.  Which is why there is an increasing number of claims out there that we shouldn't eat gluten -- or drink milk, either, for that matter -- because wheat and cows are from outer space. 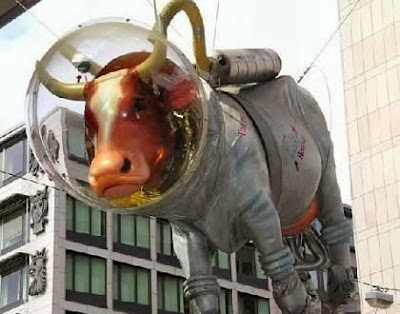 I'm not making this up.  For example, take the following, that showed up on the Starseed Network:


Aliens gave us cows and wheat?

I've been researching. From what I can find, cows just showed up about 10,000 years ago. There were similar species before then but were too wild and twice as big.

Wheat, too, just appeared about the same time.

I'm just getting into all this.

Has anyone else ever heard of/know anything about this? I'd like to do a blog post about it and I'm having a hard time finding anything. Maybe I'm not looking in the right place. Anyway, anything anyone's got would be great!

And while there were a couple of derisive responses, as you might expect, more of them were entirely in support of this bizarre contention.  One of them suggested that goats might be aliens, too, because they have slit pupils.  And then there was this:


In my spirit quests I have been told that cows were on mars. Wheat was brought by ET to be farmed by mankind. Have you ever heard of Operation MindFuck? The author of Illuminatus (Robert Anton Wilson) and Cosmic Trigger, talks about an instance where a man, Joseph Simonton, had an extraterrestrial encounter and the alien being presented him with a plate of wheat germ pancakes.

Well, there you are, then.

I suppose that this would explain one thing, namely, the fact that the aliens when they come here seem intent on stomping out patterns in wheat fields and mutilating and/or abducting cows.  If you are doubtful about the latter, you should visit the wonderful site Cow Abduction.  Once it loads, pass your cursor over the image of Bessie, contentedly munching grass in a field, and then tell me that's not the most awesome thing you've ever seen.

Be that as it may, I'm doubtful that aliens are responsible for any of this, especially not the origins of cows and wheat.  Cattle have been around for a long, long time, and their domestication from the wild bovine called the aurochs has been thoroughly studied by paleontologists and archaeologists.  As far as wheat goes, its origin lies in the (natural) hybridization of two species of wild grasses, followed by artificial selection by early humans [Source].

So, much as you might like to attribute the bellyache you got after eating a bagel with cream cheese to the extraterrestrial origins of gluten and lactose, it doesn't really hold water.

But if you're looking for a terrestrial species that might have been seeded here by aliens, my vote would go to the carrot.  In my mind, carrots have no redeeming features, with the possible exception of carrot cake, which only works because the carrot flavor is swamped by large quantities of cinnamon and ginger.  Otherwise, carrots (1) taste disgusting, especially when cooked, and (2) if eaten in sufficient quantity, will turn your skin orange.

Sounds like an evil alien plot to infiltrate our dinners, to me.

So that's our dip in the deep end for today.  Just to conclude: even though gluten and lactose sensitivity are real phenomena, there is no need to leap to the further conclusion that wheat and cows are from outer space.  If you doubt that, you should probably consult your local Tarot card reader, whom I am sure will confirm what I'm telling you.
Posted by Gordon Bonnet at 2:55 AM