It's not often you get to be a witness to the birth of an urban legend.

Or not so urban, actually, as this one supposedly happened in rural Iceland.  Have you seen it?  It's making the rounds of social media -- a story about a Danish anthropologist, missing for seven years, who showed up last week, naked and confused, claiming that she'd been kidnapped and held hostage by elves.  As of now, I've been sent links to the story a total of six times, so chances are you've run across it, too.

The story is that an anthropologist, Kalena Søndergaard, went off in February of 2006, "seeking proof of elves," and vanished.  Searches for her, centered around the Álfarkirkjan -- the "Elf Church Rock" where she was last seen -- turned up no trace of the missing woman.  Then, last week, some hikers stumbled upon her, crouching on a rocky ledge, looking "more ape than human."  The article says:


Danish researcher Kalena Søndergaard was stark naked, covered by dust and babbling incoherently when rescuers found her outside a tiny opening in the famous Elf Rock, traditionally believed to house the underground dwelling place of mankind’s tiny cousins.

“She was crouching like an animal and spoke only in a language unrelated to any we know,” said Arnor Guðjohnsen of the National Rescue Service, which airlifted the 31-year-old survivor to a hospital by helicopter.

“The only word we could understand was ‘alfur,’ an old Icelandic word for elves. On her back were strange tattoos similar to those markings Viking explorers found on rock formations when they settled Iceland in 874, traditionally known as ‘elf writing.’ ”

When I hit the name of the gentleman from the National Rescue Service, I frowned a little, because "Guðjohnsen" isn't a properly formed Icelandic surname -- all surnames in Iceland, by mandate, are the father's first name, in genitive case, followed by "-son" if it's a boy and "-dottír" if it's a girl.  So Arnor should have been "Guðjohnsson," not "Guðjohnsen."  (A similar problem happened later in the story, with a "folklore expert" named "Eva Bryndísarson" -- she would have been "Eva Bryndísardottír.")

Those, of course, could have been typos or mistranscriptions, and in any case are minor compared to the other whoppers that occur in the story.  Let's start with the fact that Kalena Søndergaard apparently doesn't exist, at least by my attempts to research her name online in connection to any citations for anthropological research.  Then let's take the photograph that was posted to "prove" the claims in the story: 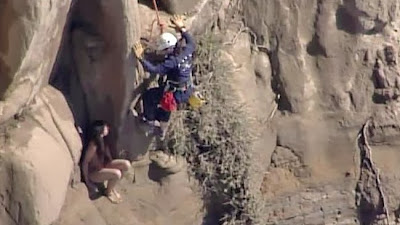 So, on the surface, it does seem to be a photograph of some guy rescuing a naked woman sitting on a rock, and how many situations like this can have happened?  Turns out, it only took one, and it had nothing to do with elves; in March of 2011 the Daily Mail reported on the story of a woman in San Diego who had gotten stranded on a rock ledge trying to climb down to a nude beach, and had to be rescued from above.  Besides the very photograph that was used for the elves-in-Iceland story, the Daily Mail article had a series of further photographs showing the hapless nude sunbather being lifted to safety.

Then, there's the photograph that's supposedly of Kalena Søndergaard, prior to her harrowing experience with the Little Folk: 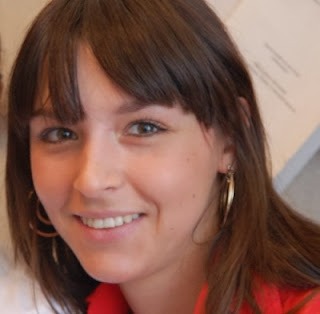 The problem is, this girl isn't named Kalena Søndergaard, she's not Danish, and she isn't an anthropologist.  Sharon Hill of the wonderful site Doubtful News found out that the photograph was grabbed from a Russian dating site -- probably selected because the girl looks vaguely like the woman in the rescue photograph.

So, due to the wonders of the internet, the whole thing was debunked in short order.  But the problem is that with hoaxes like this, often people only see the first half -- the claim -- and never run into the story disproving it.  It's probably human nature, of course.  Crazy claims have much more cachet than dry-as-dust debunkings do; who is going to forward a link making the not-too-earthshattering claim, "Elves don't exist?"

Anyhow, that's the straight scoop regarding the kidnapped Danish anthropologist and her terrifying encounter with the huldufólk.  The story is no more legitimate than the Crystal Pyramids of Atlantis thing or the Alien Mass Burial in Uganda thing.  Not that I expect this will make it die down -- for apparently one of the characteristics of bullshit is that once created, it never, ever goes away.
Posted by Gordon Bonnet at 2:24 AM