Coming hard on the heels of claims that Comet ISON is an omen of impending doom to humanity is another claim, to wit: the upcoming reversal of the Sun's magnetic field is...

... an omen of impending doom to humanity. 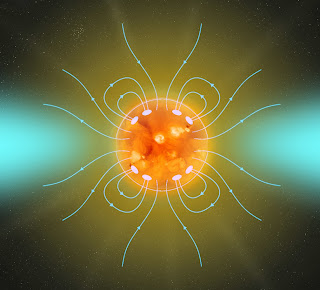 Beginning with a site with the cheerful title, The Warning: New Prophecies Reveal Global Events in the Lead Up to the Second Coming, which describes the pole flip as follows:


The closer the Day of My Great Coming draws, the more people, who say they love God, will withdraw from Me. Even those who say they are holy and exalt themselves within the hierarchy of My Church on Earth, won’t be able to see the Truth. They will not see the Truth because they will be so busy attending to matters and ceremonies, which will be insulting to Me.  The first sign will be that the Earth will spin faster. The second sign concerns the sun, which will loom larger, brighter and begin to spin. Beside it you will see a second sun. Then the weather will cause the world to shake and the changes will mean that many parts of the Earth will be destroyed...

Wars will spread; earthquakes will shake the four corners of the Earth and famine will grip mankind and every wicked gesture and insult made before God will result in a terrible chastisement. When those who accept My Mercy lead My Church – every demon will curse these children of God. To protect them, God will intervene and woe to those who spit in the Face of their Creator.

The time has come. Those who curse Me will suffer. Those who follow Me will live through this persecution, until the Day when I come to sweep them into My Merciful Arms. And then, only those who remain, because they refused My Hand of Mercy, will be given over to the beast they idolized and to whom they sought pleasure from.

So that sounds pretty cheerful.  Then we have this guy, posting on the apparently well-named site Lunatic Outpost:


The Sun starting flip its magnetic field early in May 2012 as ISON was crossing the Orbit of Saturn.

This was the infamous Quadri-Polar issue last year, which when viewed in the lead up to the end of the Mayan Calendar and Comet Elenin swing in was considered an omen of doom.

It was then explained away as the beginning of the solar magnetic field flip which was due in May 2013 the mechanism being that the north pole splits first into a positive end at the north pole and two negative poles at the equator which the link to the positive south pole to form a quadri-polar structure...

While I can't speculate on what this means in terms of major doom it does indicate that ISON has a strong magnetic field with a spherical iron core with a potential for a major electro-magnetic event with the Sun at perihelion...

An interesting number appears if we take Immanuel Velikovsky's rough orbit of Nibiru of 3600 years and round it up to the closest whole number multiple of the 11 year cycle of 3663 years and assuming ISON is Nibiru, it means we are in the 333rd Sunspot cycle which is really a half cycle as the Sun returns to its original polarity configuration every 22 years.

Looking at the quarter cycle of 5.5 years this is the 666th cycle!

Then we have this rather alarming post, on the amazingly wacky David Icke Forum:


Solar flairs [sic], the north pole moving, the weak magnetosphere allows more solar wind into the atmosphere, the tectonic plates are moving much more, we have the earth tilting and springing back on its axis as we can see from the sunset being out of place and its timing. All of these things have a profound effect on our psyche...  are you feeling off lately?

So put the first post, with all the devils and demons and so on, together with the second, with Nibiru and the number 666, and the third, with "out-of-place sunsets," and you have a trifecta of evil that just makes me want to hide in bed under my down comforter.  But of course, given that it's currently 19 F outside, I felt like that already, so maybe that's not all that significant.

Let's put this in perspective, why don't we?  Maybe look at some facts?  Crazy idea, I know, but it might just work!  Space.com did a nice job of explaining the pole reversal, as follows:


Every 11 years or so, the two hemispheres of the sun reverse their polarity, creating a ripple effect that can be felt throughout the far reaches of the solar system. The sun is currently going through one of those flips in its cycle, said scientists working at Stanford University's Wilcox Solar Observatory, which has monitored the sun's magnetic field since 1975.

"The sun's poles are reversing, and this is a large-scale process that takes place over a few months, but it happens once every 11 years," Todd Hoeksema, a solar physicist at Stanford said in a video about the polarity reversal. "What we're looking at is really a reversal of the whole heliosphere, everything from the sun out past the planets."

The polarity reversal probably won't harmfully impact Earth, in fact, it could even protect the planet in some ways, scientists have said.
The sun's huge "current sheet" — a surface extending out from the sun's equator — becomes wavier as the poles reverse. The sheet's crinkles can create a better barrier against the cosmic rays that can damage satellites, other spacecraft and people in orbit, scientists said.

So, the whole thing happens every eleven years?  Meaning I have so far lived through four of these pole flips already, and have yet to be eaten by demons, gone through a "major doom," or observed a sunset that didn't happen exactly when it was supposed to?

If, like me, pictures help you to understand, take a look at Karl Tate's lucid explanation of the whole thing, where along with great diagrams he tells us the following:


Electric currents inside the sun generate a magnetic field that spreads throughout the solar system. The field causes activity at the surface of the sun, surging and ebbing in a regular cycle. At the peak of the cycle, the polarity of the field flips, during a time of maximum sunspot activity...  The sun is not a solid ball, but rather like a fluid. It exhibits differential rotation, meaning the surface moves at different speeds depending on latitude. This results in the magnetic field lines getting wound up. When the winding gets extreme, the magnetic field lines "snap," causing solar flares at those locations on the surface.

So there you have it.  The Sun is undergoing a field reversal, an event that would only have been noticed by astronomy nerds if it hadn't been for the rather odd subset of humanity who seems to like to look around for Portents of Doom.  The pole flip isn't going to do much to us here on Earth, so you don't need to worry about your refrigerator magnets all falling off, your GPS malfunctioning, or the Second Coming of Christ.

You know what I wish?  I wish that once, just once, we'd go through one of these Omens of Evil Where Nothing Happens, and all of the nutty apocalyptoids would get together and publish a retraction.  "Hey, guys," the retraction would say.  "We were wrong!  The Earth didn't end, after all.  I guess we better go sign up for some science classes!"  But of course, that will never happen.  They take what they do, and each other, way too seriously for that.

It's the deadly serious aspect of it that is honestly what amuses me the most -- because people have been foretelling the future for millennia, and have almost always gotten it wrong, and yet they keep trying.  And people keep believing them.  Myself, I'm more like the Roman philosopher and writer Cicero, who quipped, "I do not understand how two augurs can pass each other on the street without laughing."
Posted by Gordon Bonnet at 2:45 AM