It's funny to what extent people will believe unscientific bullshit when they've been primed to do so by fear.

And by "funny" I mean "so frustrating that I facepalmed hard enough to give myself two black eyes."

The tsunami that struck Fukushima, Japan two years ago still weighs heavily on people's minds, and for good reason.  It was a disaster of massive proportion, causing almost 16,000 known deaths (another 2,500 are still missing and are presumed dead).  Add that to the damage to a nuclear facility, and it's no wonder that people consider this one of the scariest events in recent memory.

So let's start there; horrible earthquake, terrible death toll, radiation release from a nuclear plant.  So far, frightening enough.  But the problem is, the last-mentioned -- nuclear radiation -- is a phenomenon that few people understand well enough to judge accurately the hazards it might generate.  This combination of fear and lack of information is a powerful one, and probably explains why hundreds of sites started cropping up last year (and continue today) claiming that the radiation plume from the damaged nuclear reactor was "frying the west coast of the United States."  Usually the story is attached to this map, that allegedly shows the progress of the radioactive water across the Pacific: 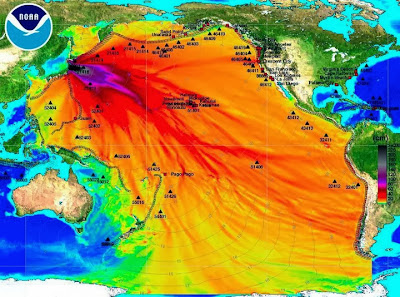 The problem is, this isn't a map of radiation -- this is a map, made by the National Oceanic and Atmospheric Administration shortly after the tsunami, showing wave heights across the Pacific.

But boy, it sure looks scary, doesn't it?  All those reds and oranges and purples.  That's got to be bad.

And just to (I hope) put your mind further at rest, a study done at the Institute for Cross-Disciplinary Physics and Complex Systems found that the radiation, when it reaches the United States west coast, will be so dilute that it will pose no threat to human health, thus further highlighting the difference between the words detectable and dangerous.

Yet the panic continues, which as I mentioned, sets people up to believe nonsense.  And the nonsense reached new heights in the past couple of weeks, with a set of claims that evidently originated with Topeka's News, an online media outlet that apparently is "news" in the same sense as The Weekly World News is.  Now, let me be up front; I think this could be satire.  It could be that Poe's Law has reared its ugly head again.  But honestly, I'm not sure, and it really doesn't matter, because I'm beginning to see these stories making the rounds of social media -- and people believe them.

Let's start with this one, about a giant radioactive killer dog.

Here's what they have to say:


Russian officials are confirming the existence of a new dog species: the giant Tibetan Mastiff.

Genetic tests have confirmed Fukushima radiation in the dog’s genes, confirming that runoff from Japan has contaminated Russia waters and is not creating genetic monstrosities in the nation [sic: I'm guessing they meant "now creating...," although "not creating..." makes more sense in context].

To date, dozens of reported sitings [sic] of giant Tibetan mastiffs running throughout the Russian Siberian tundra have been reported, but it was not until this week that researchers were able to confirm the dog.

Well, there are a few problems with this claim, beginning with the fact that (1) Tibetan mastiffs are not new (the Wikipedia article calls the breed "ancient," actually); (2) they're not a separate species, but are just ordinary dogs, albeit really big ones; and (3) since Tibet is up in the mountains, it's hard to imagine how "runoff from Japan" could have gotten there since water generally doesn't flow uphill all that well.

Oh, yeah, and you can't have "radiation in your genes."

Yes, but they have photographs, to wit: 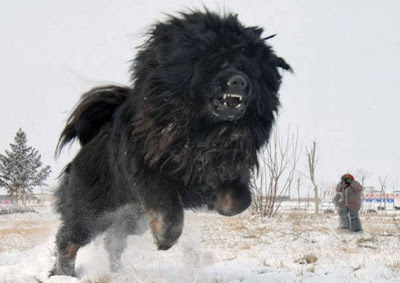 Big!  Scary!  Look at the teeth!  Must be a radioactive mutant, right?

Oh, but they're not done yet.  Not only do we have giant scary mutant dogs running around, we have the rare Fukushima Radioactive Mutant Hamster Lion: 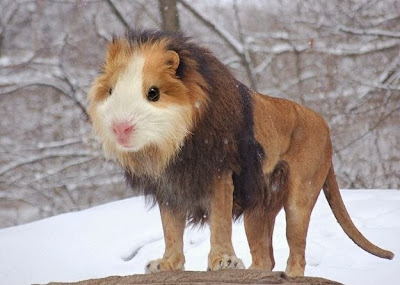 The writer for Topeka's News admits that this photograph hasn't been verified, but says, "the picture does provide an excellent opportunity to once again delve into the topic of nuclear energy." 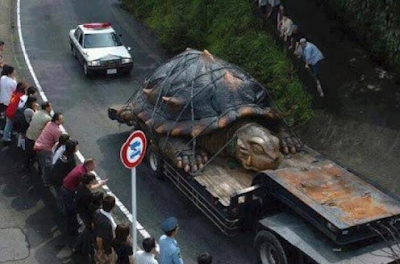 If you're curious, this photograph is actually a still from the 2006 Japanese horror movie Gamera the Brave.  [Source]

But the problem is, these are being circulated around all over the place, usually with headlines like, "What is the radiation from Fukushima doing to animal life, and what could it do to humans?"  And very few people, that I've seen, are responding to those posts with, "You're joking, right?"

I have a solution to all of this, and it's the same one I always recommend; before you start panicking, learn a little science.  Apply some logic and skepticism to what you read.  And for cryin' out loud, find out what the scientists themselves are saying.  These days, you can often find out the straight scoop just by appending the words "skeptic" or "debunk" to a search (e.g. "giant Fukushima mutant dog debunk"), and you'll pull up what usually reputable sources like Doubtful News or The Skeptic's Dictionary or Skeptoid or Snopes have to say about it.

To sum up; no need to worry about the radiation from Japan causing mutations that will result in gigantic herds of carnivorous Bunny-Jaguars terrorizing downtown Omaha.  As devastating as the situation was (and still is) in Japan, the radiation isn't going to have much of an effect on us here in the United States, and that's not how mutations work, anyway.

Which is unfortunate, actually, because the idea of a "Bunny-Jaguar" is kind of cool.
Posted by Gordon Bonnet at 3:00 AM