Is it just me, or do others find it weird how much the Religious Right focuses on issues of sexuality, and ignore the other biblical rules?

And I'm not just talking, here, about the oft-quoted bits in Leviticus that are just plain weird, such as the prohibition against wearing cotton-polyester blends (Leviticus 19:19).  I'm talking about much bigger stuff.

The whole thing comes up because of Gordon Klingenschmitt, the outspoken evangelical Navy chaplain who has been increasingly in the news because of his vitriolic opposition to anything approaching LGBT equal rights.  Most recently, he weighed in on the story that President Obama was changing the United States Marine Corps dress uniform code to require unisex hats, which an article in the New York Post described as "so 'girly' that they would make the French blush." 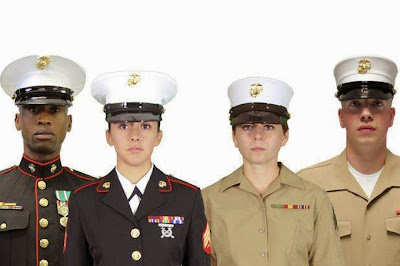 I'll ignore the Post's obnoxious characterization of the French, which I would have thought would be beneath any reputable news source, because that snide little remark was minor compared to the outcry from conservatives that erupted when the story hit.  The howls from Fox News alone were enough to bring down the walls of Jericho.  And then Klingenschmitt and other members of the Religious Right took up the thread, claiming that the whole thing was part of an evil plot to turn the members of the military gay.

"You can't have men in the United States Marines wearing clothing that's designed for women," Klingenschmitt said, on his weekly show Pray in Jesus' Name. "So you know what President Obama's solution is?  To make all the uniforms the same.  And this is going to usher in the possibility of transgender, cross-dressing men who want to look like women, they'll be able to wear a women's uniform.  This is not just a fashion stunt, it's setting the stage for transgender cross-dressing men to enter the military.  This decision came down from on high, I guarantee it, and that's a demonic spirit."

Righty-o, Reverend Klingenschmitt.  The only problem is, the entire story is false.  There was no command from President Obama, no plan to change the design of the Marine Corps' dress hats, no evil desire to turn everyone in the military gay.  And worse still, Gordo, you knew that, didn't you?  Because immediately after the story hit the Post (and launched into Fox News), the Marine Corps' own news source -- Stars & Stripes -- ran a story debunking the whole thing.  "The president in no way, shape or form directed the Marine Corps to change our uniform cover," said an official statement from the Marine Corps headquarters.  "We are looking for a new cover for our female Marines for one overriding reason: The former manufacturer went out of business. … The Marine Corps has zero intention of changing the male cover."

That's right; given that the story from the Marine Corps headquarters predated both Klingenschmitt's screed, and most of the hoopla on Fox News (and that it took me a thirty-second Google search to find the story debunking the claim), it's not too far-fetched a surmise that Klingenschmitt, and the reporters on Fox News, weren't just wrong; they were lying.

So it's all very well for Klingenschmitt and his pals to indulge in their peculiar obsessions about what people might be doing in their bedrooms, and claiming biblical justification for their stance.  The problem is, doesn't the bible have a few things to say about lying?

Oh, yeah, like the Eighth Commandment, "Thou shalt not bear false witness against thy neighbor."  And Leviticus 19:11, "Ye shall not steal, neither deal falsely, neither lie to one another."  And Psalms 101:7, "He that worketh deceit shall not dwell within my house: he that telleth lies shall not tarry in my sight." And Proverbs 19:9, "A false witness shall not be unpunished, and he that speaketh lies shall perish." And Jeremiah 9:3, "And they bend their tongues like their bow for lies: but they are not valiant for the truth upon the earth; for they proceed from evil to evil, and they know not me, saith the Lord."  Oh, and my favorite one: Zechariah 13:3, "...Thou shalt not live; for thou speakest lies in the name of the Lord."

Hmm.  A few more lying-related verses to fret about, there in the bible, than there are ones defining what people are allowed to do with their naughty bits.  A bit worrisome, that.

It's funny to me, in a wry sort of way, how the evangelicals claim the moral high ground over atheists like myself, and yet so many of them are perfectly happy to twist the truth into knots to support whatever political position they prefer.   And they will stand there and declare, with no apparent sense of cognitive dissonance, that because my general attitude is that I don't give a rat's ass what two consenting adults do in their bedrooms (and, if they're having fun, more power to 'em), that I'm the one who is somehow evil and depraved.

On that count, Klingenschmitt et al. might want to refresh their memories about another biblical verse that comes to mind, namely Matthew 7:1-5: "Judge not, that ye be not judged.  For with what judgment ye judge, ye shall be judged: and with what measure ye mete, it shall be measured to you again.  And why beholdest thou the mote that is in thy brother's eye, but considerest not the beam that is in thine own eye?  Or how wilt thou say to thy brother, Let me pull out the mote out of thine eye; and, behold, a beam is in thine own eye?  Thou hypocrite, first cast out the beam out of thine own eye; and then shalt thou see clearly to cast out the mote out of thy brother's eye."
Posted by Gordon Bonnet at 2:40 AM