I am frequently amazed by how quickly the research for this blog gets me into the deep, uncharted waters of the Great Wingnut Ocean.

Yesterday a friend of mine asked me if I'd heard the contention that the government (for "government" read "evil superpowerful Illuminati overlords") was planning a days-long shutdown of the electrical grid, nationwide, in November.  I said that I hadn't -- and, of course, that I doubted that there was any such plan.

But I thought that this might be fertile ground for a blog post (which was, in fact, my friend's suggestion), so I did a Google search for "planned electrical grid shutdown."  On the plus (i.e., real) side, I did find that various electrical suppliers had run simulations of shutdowns -- essentially, drills that allowed them to develop strategies for coping with the outcome should a real grid breakdown occur.

On the minus (i.e. wacko) side, I found that yes, there are people who believe that the government is planning on turning off the electricity.  There are hundreds of such claims.  Why, you might ask?  What could such a shutdown accomplish?  Well, that's not clear; most of the claims seem to stop at the "see how evil government is?" stage.

What is most amusing about all of this is that since Google pulls out not only recent links but older ones, there were a number of sites claiming that there'd be a grid shutdown on dates that have already passed.  I found several from 2011 and 2012, as well as May 2013, August 2013, and September 2013.

Did I miss it, or was there electricity pretty much continuously through all of those?

But far be it from woo-woos to admit they were wrong just because their predictions have failed a dozen times before.  This time, they say, it's gonna happen.  November 13 and 14, folks -- this is it.  Back up your computer files, make sure you have bottled water and propane for your Coleman stove, make sure you have firewood ready to go -- because They are going to shut down the whole nation.

Still wondering (1) what possible reason people could have to make that claim, and (2) what on earth they think the government could be trying to accomplish by shutting off the power, I started to dig around on such sites, starting with a page called "Will There Be an Electrical Grid Blackout on November 13-14, 2013?", hosted on Etheric.com.  There were hints that this was gonna be some kind of "false flag" event, meant to distract the citizenry while the Bad Guys went off and did something even worse elsewhere, but no particular mention of what this even-worse-thing was going to be.  But I kept running into the name Paul LaViolette, so I figured he might be an interesting source of "information" (using the word fairly loosely) on the topic.  So I started doing some research on LaViolette himself.

Well, it turns out that Etheric.com is more or less run by Paul LaViolette, who is either a wacko crank (generally the view of the skeptics at the James Randi Educational Foundation), or an amazing genius who has made earthshattering discoveries in physics (the view of LaViolette himself).  LaViolette has a theory of "galactic superwaves" -- colossal explosions of cosmic radiation from the galactic core -- and has expounded upon this topic over at none other than Etheric.com.

Now, I'm not an astronomer, and am unqualified to weigh in on LaViolette's contention that the galactic core is sending particle blasts our way every 10,000 or so years, but alarm bells went off when I read his publications list, which included books called Decoding the Message of the Pulsars, Subquantum Kinetics, and The Secrets of Antigravity Propulsion, the latter of which got a one-star review on the Barnes & Noble website that said, "This is the worst so-called science book I have ever read."

But by this time, I was getting a bit far off the track of finding out about electrical grid shutdowns, or what (if anything) they could have to do with galactic core blasts.  So I swam back to shore, and continued my research...

... and then got instantly launched back into deep water, with a contention that the November electrical grid shutdown was to stop Americans from seeing that Comet ISON would be "interacting with the planet Mercury."

This made me say, first, "What the hell?" and second, "Wait a minute; if the power went out, wouldn't people be more likely to go outside and look up into the sky?  If the power's on, then 90% of America will be inside watching Real Housewives of New Jersey and Here Comes Honey Boo-Boo."

So maybe this is the plan, but if so, it's a really stupid one.  If this is the best they can do, I think the current Illuminati seem to have the sophistication level of Boris Badinov and Natasha Fatale, and they need to step down and let some people take over who can really run a conspiracy right. 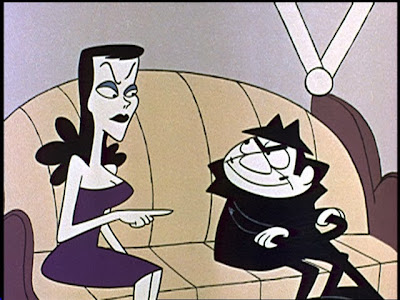 But I decided to give it one more try, and swam back to shore again, and this time found that the religious whackjobs were claiming that the government was shutting down the grid on November 13 & 14 because the government is in league with Satan, and this will be the start of the End Times.

At that point, I just stopped struggling, figuring that drowning wasn't looking so bad, after all.
Posted by Gordon Bonnet at 4:55 AM