The one thing I appreciate most about science is that it gives you a standard protocol by which to determine if a claim is supported or not.

That's not to say that the scientists can't get it wrong.  They do.  But science is self-correcting -- it is based on evidence and logic, and if at some point evidence and logic send you in a different direction than the prevailing wisdom, you have to abandon the prevailing wisdom and head off where the arrow points.  So the oft-quoted criticism of science by high school students everywhere -- "Why do we have to learn this, when it could be proven wrong tomorrow?" -- is actually science's great strength.

Better than studying something whose "truths" couldn't be falsified whether you wanted to or not, where there is no way to tell if a claim is wrong or right, where the directive is "just believe it because."

And I'm not just pointing a finger at religion, here.  Much of pseudoscience operates by this same evidence-free approach.  Take, for example, the page called "The Health Effects of Gemstones" on the site PositiveMed.  On it, we are told that rocks can help us in all sorts of ways, from physical health to mental health to relationships to "activating various chakras."

As an example, we are told that fluorite "enhances memory, intellect, discernment, and concentration, (and) brings wisdom."  Which sounds nice, doesn't it? 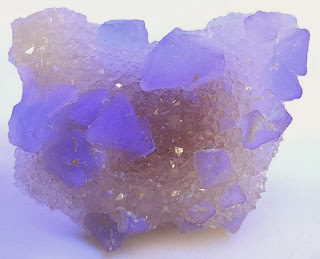 (photograph courtesy of Rob Lavinsky, iRocks.com, and the Wikimedia Commons)

Selenite "stimulates brain activity, expand(s) awareness, develops telepathy, and symbolizes the clearest state of mind available."  Carnelian "enhances creativity and sexuality, recycles past-life experiences, (and) speeds up the law of karma."  Black obsidian is a "spiritual protector, (and) helps one to understand and face their [sic] deepest fears."  Labradorite, on the other hand, "protects ones [sic] aura, (and) keep(s) the aura clear, balanced, and free of energy leaks."

Psychic Fix-a-Flat, is kind of how I see the last-mentioned.

All through reading this, I was thinking, "How on earth do you know any of this?"  There is no possible evidence-based way that someone can have come up with this list; it very much has the hallmark of some gemstone salesperson making shit up to sell polished rocks to unsuspecting gullible people.  I very much doubt, for example, that anyone did an experiment by leaving his black obsidian home, and seeing whether his deepest fears were more or less terrifying to face that day.

The whole thing, then, is a completely fact-free way of knowing the world, which I find fairly incomprehensible.  Even before I knew much science, I remember pestering my parents about how they knew things were true, and (more specifically) how you could tell if something was real or not.  As a five-year-old, I remember having a discussion with my mom about how she knew that Captain Kangaroo was real but Bugs Bunny was not, since she had clearly never met either one in person.

A junior skeptic I was, even back then.

It is perpetually baffling to me that there are so many people who don't see the world that way -- a bias, I suppose, that represents my own set of blinders.  My failing as a thinker seems to be that I just can't quite bring myself to believe that everyone doesn't evaluate the truth or falsity of statements the same way I do.

So those are today's philosophical musings, brought about by a rather silly website about magic rocks.  And now that I've gotten this written, I should go and apply some aquamarine to my forehead, which is supposed to "encourage the expression of one's truth, (and) reduce fear and mental tension."  Heaven knows I could do with more of that, some days.
Posted by Gordon Bonnet at 2:25 AM