The Atlantic ran a story last week by Miles Kimball and Noah Smith called "The Myth of 'I'm Bad at Math.'"  In it, we get the hopeful message that people who have claimed all along that they are "bad at math" may not be, that ability at mathematics comes from hard work, not genetics. 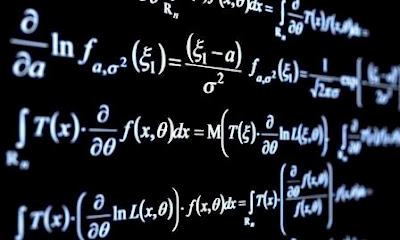 (Photograph courtesy of AdamK and the Wikimedia Commons)

They cite a number of sources (and their own experience with educating students) in supporting their assertion.  The most interesting evidence comes from a study at Columbia University by Lisa Blackwell, Kali Trzesniewski, and Carol Dweck, which showed that students who agreed with the statement "You can greatly change how intelligent you are" achieved higher grades than those who agreed with the statement "You have a certain amount of intelligence, and you can't really do much to change it."  Further, convincing students who agreed with the second statement that intelligence was actually under their control had the effect of raising their grades -- and their self-confidence.

On one level, this is hardly surprising.  No one seriously believes that intelligence, or even a more limited slice of it -- like mathematical ability -- is entirely inborn.  We all know examples of people who seem to have a great deal of talent but who are lazy and never develop it.  They cite the Japanese culture as one in which hard work is valued above innate talent, and imply that this is one of the reasons Japanese children score, on average, better than American children on math assessments.  Kimball and Smith state, in their closing paragraph,


Math education, we believe, is just the most glaring area of a slow and worrying shift. We see our country moving away from a culture of hard work toward a culture of belief in genetic determinism. In the debate between “nature vs. nurture,” a critical third element—personal perseverance and effort—seems to have been sidelined. We want to bring it back, and we think that math is the best place to start.

And while I agree with their general conclusion -- that everyone could probably do with putting out a great deal more effort -- I can't help but think that Kimball and Smith are overstating their case.

I have a 27-year-long baseline of watching students attempting to master technical concepts, and there is a difference in the native ability students bring to bear on the topics they are trying to learn.  I still remember one young lady, in one of my AP Biology classes years ago, who spent many frustrated hours attempting to master statistical genetics, and who failed fairly catastrophically.  Her habit of hard work, and an excellent ability with verbal information, led to success in most of the other areas we studied -- in which a capacity for remembering names of things, and the connections between them, matter more than a quantitative sense.  But in statistical genetics, where you have to be able to understand how numbers work on a very fundamental level, that combination of hard work and verbal ability didn't help.

I recall her saying to me one day, after an hour-long fruitless attempt to understand how the Bateson-Punnett method of mapping genes works, "I guess I just have a genetics-proof brain."

In no activity during the year in my introductory biology class do I notice this dichotomy between the math brains and the math-proof brains more than the one we did last week.  It's a common lab, and I bet many of you did it, when you were in high school.  Cubes of raw potato (or some other absorbent material) of different sizes are soaked in iodine solution (or some other dye), and after a given time, they're cut in half to see how far the dye has diffused into the cubes.  After a series of calculations, the far-reaching (and rather counter-intuitive) conclusion is arrived at -- that small cubes have a much larger ratio of surface area to volume than big ones do, and as a result, diffusion is way less efficient for big cubes.  This is one of the reasons that the cells of a whale, a human, and a mouse are all about the same size (really freakin' small) -- any larger, and transport would be hindered by their low surface-area-to-volume ratio.

The calculations aren't hard, but I see many kids losing the forest for the trees.  Quickly.  Which kids get lost seems to have little to do with effort level, and almost nothing to do with verbal ability.  I can typically divide the class into two sections -- the group that will get the concept quickly and easily (usually with a delighted, "Oh!  Wow!  That's cool!"), and the group that after slogging their way through the calculations, still don't see the point -- sometimes, not even after I explain it to them.  Which are in which group seems to have nothing to do with their grades on prior tasks -- or with the effort they exert.

It's ironic that nearly simultaneously with the article in The Atlantic, a paper was published in PNAS (The Proceedings of the National Academy of Sciences) by Ariel Starr, Melissa Libertus, and Elizabeth Brannon, of Duke University.  Entitled "Number Sense in Infancy Predicts Mathematical Ability in Childhood," the study by Starr et al. tells us something fascinating -- that a "preverbal number sense" in infants, who have never manipulated numbers before, predicts their score on standardized math assessments three years later.

Here's how Rachel Nuwer of Science Now describes the experiment:


The researchers showed the babies opposing images of two sets of dots that flashed before them on a screen. One side of the screen always contained 10 dots, which were arranged in various patterns. The other side alternated between 10 and 20 dots, also arranged in various patterns. The team tracked the infants’ gaze—a common method for judging infant cognition—to see which set of dots they preferred to watch. Babies prefer to look at new things to old things, so the pattern of dots that flashed between arrays of 10 and 20 should appear more interesting to infants because the dots were changing not just in position, but in number. Both screens changed dot position simultaneously, so in theory, the flashing pattern changes were equally distracting. If an infant indicated that she picked up on the difference in dot numbers by preferentially staring at the 10- and 20-dot side of the screen, the researchers concluded that her intuitive number sense was at work.

Three years later, the children who achieved the best scores on preschool math assessments were, to a great degree, the ones who had shown innate mathematical sense as infants.

Now, I don't want to imply that hard work isn't important; there's a lot to be gained by effort, and I suspect that even my long-ago student with the "genetics-proof brain" would have gotten it had she persisted.  But Kimball and Smith's assertion, that hard work can trump innate ability, may simply be factually incorrect.  The bottom line may be that perhaps everyone can learn differential calculus, but the hard-wiring of our brains is probably different enough that for some of us, the effort and time that would be required would probably represent the limit of an exponential function as t approaches infinity.
Posted by Gordon Bonnet at 2:43 AM