A couple of days ago, a student and I were discussing the issue of how much weight should be given to purely anecdotal evidence.  It's an important question, not only in "fringe" fields like cryptozoology and UFOlogy, but in medicine and law -- because what, after all, is eyewitness testimony but anecdote?  In scientific circles, anecdote is usually considered the lowest tier of evidence, for the very good reason that it relies on the very unreliable human memory.  Anecdotal evidence is simply too prone to cherry-picking, misremembering, or outright lying to be given much credence in the absence of any more reliable support, even if you have lots of it.

As my student put it: "The plural of anecdote is not data."

I bring this up because of a debate that happened last week at Utah Valley University between paleontologist Paul Bybee and folklorist Danny Stewart, called "Surviving Dinosaurs in Africa."  The gist of it was to look at claims that there is a holdover from the Cretaceous Period still stomping around the Congo Basin, a fearsome beast called the Mokele-Mbembe. 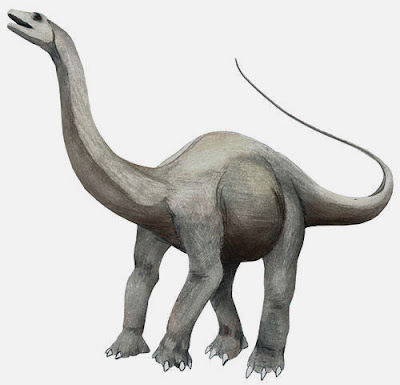 (Image courtesy of the Wikimedia Commons)

An excellent summary of the alleged sightings of this creature can be found here, wherein we can read accounts like the following:


In 1909, Lt. Paul Gratz, after hearing a number of natives describe the creature and having been shown a hide that purportedly came from Mokele-mbembe, became the first to describe the alleged creature as resembling a sauropod (which means lizard foot). In the same year, renowned big game hunter Carl Hagenbeck said that a number of independent, reputable sources familiar with the region reported a large animal that resembled a sauropod, and, as a result, stories about the cryptid became a popular media topic for a while afterward.

In 1913, a German officer, Captain Freiherr von Stein zu Lausnitz (try to say that while eating crackers), a surveyor of the German colonies in what is now Cameroon wrote of reports of a creature the size of an elephant or hippo with smooth brown/grey skin and a muscular tail like an alligator. He was shown a path that was said to be a Mokele-mbembe made trail, but because of the multitude of large game (elephant, hippo, etc.) tracks, there was no real, clear evidence to be found.

Despite (by some accounts) over 20,000 sightings of this giant animal, there is not one piece of hard evidence supporting its existence -- not one bone, tooth, or bit of skin.

But that doesn't stop silliness like last week's "debate," in which we get to hear statements like the following, from folklorist Stewart: "The scientific method has a hypothesis.  I see folklore, fantasy and mythology as synonyms of hypothesis."

Sorry, but this is one of the wackiest examples of the If-By-Whiskey fallacy I've ever heard -- simply altering the definition of a word to suit whatever point you were trying to argue.  "Hypothesis" in science has an extremely precise meaning -- a testable proposed explanation for a phenomenon (I actually rather detest the grade-school definition of "an educated guess" because it makes the whole thing sound far more random than it actually is).  "Folklore" isn't a synonym for "hypothesis;" "folklore" is a synonym for "people making shit up."

Now, I realize that sounds pretty harsh, and before all of the mythology buffs out there start throwing heavy objects in my general direction, allow me to point out two things.  First, I love mythology and folklore myself -- I have had a positive passion for it since childhood.  However, I have always been certain that the stories about Odin and Loki and Thor et al. were stories, and that however much I sometimes think the world could use a good dose of Ragnarök, it's not gonna happen.  (You might be interested, though, to read about a publicity campaign currently being run by the Jorvík Viking Museum in York, England, which claims that the Norse myths were all true, and that the world is gonna end in 100 days, on February 22, 2014 -- a date that coincidentally enough, marks the start of the annual Jorvík Viking Festival.)

But second, honesty demands that I point out that there have been times when folklore has proven true.  Heinrich Schliemann's discovery of Troy is often cited as an example, although you might argue that The Iliad is more mythologized history than it is folklore -- similar, in that way, to Le Chanson de Roland and the bible.  *dodges heavy objects thrown by a whole different set of people*  There are other examples where folklore has a basis in fact, of course; one in my own field is the tradition, common in northern Germany and Denmark, that when a baby is born, the eldest woman in the family is to kiss the baby's forehead, and if she tastes salt, the baby is going to be sickly and die young.  A weird superstition, you might think, until you find out that in this area of Europe, the gene for cystic fibrosis is common -- and among its symptoms is producing very salty sweat.

But just because "some folklore has partial basis in truth" is a far cry from "all folklore deserves scientific investigation."  Every culture has its accounts of big horrible monsters, which in my mind stem more from a love of scary stories than they do from an accurate representation of reality.  And it bears mention that as anecdotal evidence builds up in the absence of hard evidence, the likeliness of the claim being true does not increase, it diminishes, as counterintuitive as that might seem.  If there really have been 20,000 sightings of Mokele-Mbembe in the Congo Basin, what is the likelihood that such an apparently large population of animals has never once left behind a corpse for someone to find, or even a Jurassic Park-style bunch of dinosaur poo?

So much as I'd love to see a "survival" like this, I'm of the opinion that it's nothing more than a wild tale.  And even Stewart, last week at Utah Valley University, admitted, "There's nothing to back this up, but it's a fun story," which makes me wonder why anyone thought that there was anything there to debate.

Anyhow, now that we've got that taken care of, maybe we can move on to other things, such as the claim by a guy from Antioch, Tennessee that there was a Bigfoot in his back yard, and he has a photograph to prove it, which looks exactly like Bigfoot would look if it was a large featureless black lump.  But he did say that he howled at the Bigfoot, and it howled back, which sounds promising.  I think we should definitely send someone down to investigate, preferably before Heimdall blows the Gjallarhorn and the Frost Giants attack.  You can see how that would put a damper on things.
Posted by Gordon Bonnet at 2:53 AM