One ring to fool them all

There are some swindles that are so clever that you can't help but feel a grudging admiration for someone who could pull them off straight-faced.

P. T. Barnum, he that observed that "There's a sucker born every minute" and who co-founded Barnum & Bailey's Circus, perpetrated some doozies in his life.  But I think my favorite was one that was brilliant in its simplicity.  In his circus, he'd sometimes put up a big, elaborately-painted sign that said, "This way to the Egress!"  You followed the arrows, and saw subsequent, even bigger and more attractive signs, until finally you got to one that said, "To experience the AMAZING EGRESS, if you dare, go through this door!"

So you go through the door, and find yourself outside the circus -- and then have to pay to re-enter.  Because "egress," of course, is just a fancy way of saying "exit."

I ran into an example of this just yesterday on The Million-Pound Page (subtitled "Have a Bright Future!"), where we meet a gentleman named Alex Chiu who has developed something called an "Immortality Ring."  Before I tell you about immortality rings, though, you should check out Alex's "About Me" page, wherein we find out a variety of weird facts about Alex, including:
None of this, of course, gives us any information supporting the contention that we should believe anything he says, so I guess we'll have to evaluate his "immortality rings" on their own merits.

So, what are they?  Apparently they're a pair of magnets encased in ceramic rings that you are supposed to wear, one on each pinky, and they'll give you eternal life.  There's a cheaper pair (at $28, plus shipping and handling), if you're satisfied with a bargain-basement kind of eternal life; or the upgraded neodymium-based pair (at $39, plus shipping and handling) if you want grade-A eternal life.  The better pair has a field of 21,000 gauss (compare that to 50 gauss for a typical refrigerator magnet) -- wearing something like that on both hands seems to me to be fraught with risks, such as completely fucking up every computer you walk by, attracting metallic objects like meat cleavers and sledgehammers, and possibly becoming accidentally stuck to the side of a moving city bus as you're crossing the street. 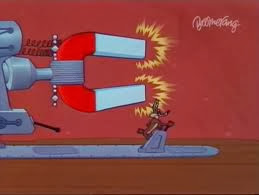 Be that as it may, Alex Chiu is claiming that if you wear his rings, you'll live forever, as long as you don't get your head chopped off in the kitchenware department of WalMart or get dragged to your death by a metro bus.  How does it work, you may ask?  Well, Alex Chiu has answers for you:


How do Eternal Life Devices fix the wounds and scars back to perfect or close to perfect, in order to free blood circulation?

Alex believes this is how it works: "Well, every cell in our body is a magnet. Cells have north and south poles. They attract each other. That's why cells form into a straight line. That is also how they form into a community, an animal body."

And lo, he has pictures to prove that cells form into a straight line:

We then find out that if your cells don't have enough "magnetic flux" they grow back "unstraight" when you're injured, and you form scar tissue, which is bad.

But here's the punch line:


Now cells can grow back 100 percent or close to perfect. Remember, every cell is a magnet. If magnetic forces are applied, cells attract to each other more strongly. Ugly scars disappear. Cholesterol, which jammed in damaged areas, slowly desolves [sic]! If cholesterol desolves [sic], blood circulation is liberated. With blood circulation liberated, enough food and oxygen goes to every cell of your entire body. Then, at this stage, you turn physically younger or stay physically young FOREVER. You will have a never ageing [sic] body. Your body condition stays the SAME for years and years!!

Well, that might sound more attractive to me if I didn't already have arthritis to the point that my knees sound like velcro when I stand up.  But maybe the rings could fix that first, and then I could stay the same for years and years after that.

The most hilarious part of all of this, though, is that there's a money-back guarantee if they don't work.  But how could you apply for it?  Just imagine the phone call to customer service:


You:  I'd like to return my "immortality rings" for a refund.

Customer service: Why?  Are you dissatisfied with them?

You:  Yes, I don't think they're working.

Customer service:  Are you dead yet?

Customer service:  There you are, then!  100% success rate achieved!  What are you complaining about?

The whole thing reminds me of what Woody Allen said, when someone asked him what he'd like written on his gravestone.  He responded, "He's not here yet."

So, that's today's contribution from the Chutzpah Department.  I wish Alex Chiu luck, although I have to say that I won't be buying any magnetic rings.  I already have enough computer problems, and the other risks just don't seem to me to be worth it, even if I would end up with "cells forming into a straight line."
Posted by Gordon Bonnet at 2:46 AM