The different flavors of "why"

In my last few posts, we've been looking at some of the various reasons that people believe odd, counterfactual things.  We've looked at fear, wishful thinking, lack of knowledge, and being hoodwinked by fast-talking, plausible charlatans, each of which plays its role in drawing people into the ethereal realms of pseudoscience.

There's one more, though, that we haven't looked at; and that is the desperation people have to know why things happen.

Most folks are uncomfortable with the idea of chaos -- the thought that there are random forces at work in the world, that some things are simply the result of chaotic processes that we couldn't predict if we tried.  This idea was brilliantly investigated in Thornton Wilder's novel The Bridge of San Luis Rey, which I can truly say is one of the few books that changed my life.  When I read it, in my Modern American Literature class when I was in 11th grade, I felt like my outlook on life would never be the same.

In it, Wilder's main character, Brother Juniper, an 18th century Franciscan monk, witnesses the collapse of a rope bridge in Peru.  Five people are on the bridge at the time, and all die.  He sets out to trace the history of the five victims, to see if there was some underlying reason why those five people, and no others, were killed.  And in the end, he realizes that if there was an explanation -- if god really did have a plan in engineering this situation -- it is so subtle that we could never know what it is.  And for this heresy, Brother Juniper and his book are both burned at the stake in the public square.

We always, somehow, want to know why.  And when science came along, there was a lot of hope that it would supplant religion in answering that question.  In some ways, it succeeded; but it didn't give people the answers to the "whys" that most were looking for, because there are different flavors of "why" -- and science is exceptionally good at answering one of them, and not so good at the other.

There are proximal "whys" and ultimate "whys," and the first is easy, and the second spectacularly difficult.  I saw a good example of the difference when, in an AP Biology class a few years ago, I asked, "Why are virtually all marsupials found in Australia?"

A student responded, in complete seriousness, "Because that's where they live."

Well, yes, but that's not what I was looking for.  I was looking for a deeper why -- an answer to the question of why marsupials had survived in Australia, but very few other places (the North American opossum being the sole counterexample).  And that's a difficult question, one that requires speculation.  Frequently questions of "ultimate why" either lead to unprovable guesses, or else are outside of the provenance of science to answer.

Which is why people have been turning to woo-woo craziness to explain the devastation that Typhoon Haiyan has wreaked upon the Philippines this past weekend. 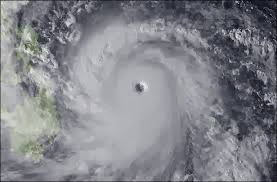 Why did the typhoon form?  Why did it become so powerful?  Why did it take the path it did?  Science can explain how it formed, and give some answers to the proximal "whys," answers that involve steering currents and sea-surface temperatures.  But as far as the ultimate "why" -- why Haiyan devastated the city of Tacloban, why it struck where it did and not somewhere else -- science is silent.

So we're already seeing the nonsense rearing its ugly head.  Haiyan was created as part of a super-secret experiment by the US military, using a microwave burst.  It was sent on the path it took because the US was trying to divert radioactive water coming our way from Fukushima.  Even further out, we have loony evangelicals claiming that god sent Haiyan to devastate the mostly-Catholic Philippines in order to punish them for "worshiping idols."

It's not hard to see how some people see science as offering incomplete answers.  Because it does, honestly.  Whenever we're in the realm of "why" we have to be careful, as scientists, because the ultimate "whys" often don't admit easy explanation.  Even such simple "whys," often taught in elementary school science classes, as "why do giraffes have long necks?" are almost certainly oversimplified answers to questions that are much more difficult to answer than they would have appeared at first glance.

So no wonder some turn to other realms, where the answers to "whys" come hard and fast -- conspiracy theories, pseudoscience, and (okay, I know I'm gonna get flak for this) religion.  Those models for understanding the world give the comfort of explaining why things happen -- sometimes, even the horrid things like illnesses, accidental deaths, personal losses... and typhoons.  Science is silent on the ultimate "whys," most of the time, and if you are uncomfortable with that, you either have to do what I do -- remain uncomfortable -- or leap outside of science.

Because, as Brother Juniper learned, if you don't make that leap, you just have to accept that sometimes the events in the world are subtle and unexplainable.
Posted by Gordon Bonnet at 5:22 AM