Waving away the facts

I always get a kick out of the tactics-switching employed by science deniers when presented with hard data.

The young-earth creationists are an especially good example of this, because hard data supporting evolution abounds, and hard data supporting the conjecture that the Earth is 6,000 years old is basically non-existent.  So every time a new bit of evidence comes in that contradicts the Adam-and-Eve story or the Noah's Ark story, they have to engage in what a college professor of mine called "waving your arms around in the hopes that it will distract the person you're arguing with long enough that he forgets what the question was."

A good example is the recent discovery of relatively intact blood cells inside a 46-million-year-old fossilized mosquito, which the folks over at the Institute for Creation Research claim is evidence for a young Earth because we know that tissue can't last that long.  In fact, they claim (falsely), evolutionary biologists are ignoring "the protests of biochemists," implying that the biologists are stubbornly clinging to a model that the rest of science has discarded.

In no area has this hand-waving been more elaborate than in the world of the climate change denier.  First, of course, there were people who simply thought that the world wasn't warming.  Some people still don't, including noted climatologists Rush Limbaugh, Ann Coulter, and Glenn Beck.  But as the data has poured in -- including the recent report from the Intergovernmental Panel on Climate Change, which stated, and I quote, "It is extremely likely that human influence has been the dominant cause of observed warming since the mid-20th century," and supported that statement with hundreds of pages of data -- the naysayers have had to tone down their rhetoric some. 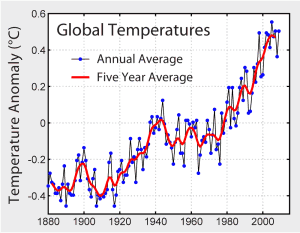 This change, however, is far short of "sorry, we were wrong."  We still have nutjobs like Coulter, Limbaugh, and Beck, bloviating on Fox News and in The Blaze that the climate scientists are lying.  More interesting, though, are the ones who finally admit that the Earth is warming up -- but want it to be something other than carbon dioxide emissions that's causing it.

It's not the carbon, they say.  It's the sunspots.  Or an increase in solar output.  Or solar flares.  Or shifts in the jet stream.  Or, in a statement that should be recorded forever in the Annals of Wingnuttery, it could be... god.

I'm not making this last bit up.  In an interview on Reverend Kenneth Copeland's evangelical talk show Voices of Victory, rumored Texas senate candidate David Barton admitted that okay, the Earth might be getting warmer, but it's not because of carbon dioxide emissions, it's because god is smiting us for being naughty:

Whether that killing is through abortion or drugs or suicide or anything else, you open the door to the killing, it's got a lot of different manifestations.  But if you choose leaders who support killing, we've opened the door to all of it.

The Founding Fathers said, when does God judge nations?  Because he doesn't resurrect nations in the future.  He judges it right now.  There is no future for any nation.  When a nation does something bad, it gets judgement or it gets blessings right now in the present.  On the spot.  Which is why policies matter.  Because if you take a bad policy, you get judged for it on the spot.  If you take a good policy, you get blessed for it on the spot.

And today, we're saying, 'Oh, no, it's global warming.' No, we opened the door that lost God's protection over our environment and that's our choice.

So. Yeah. The climatologists "can't explain" it. The scientists have no idea what is going on. Instead, it's god going "whap."

I think what gets me about all of this is that so many Americans, listening to this nonsense, just seem to nod their heads and accept that what people like Barton are saying is true.  In my class, I see more teenagers bristling when I mention "climate change" than I do when I mention "evolution;" from what I've seen, the negative press on climate change has actually outpaced that on evolution.  (I'd like to think that this may be because the anti-science crowd has given up fighting evolution because they've recognized that it's a losing proposition, but that's probably premature.)

In any case, it's maddening.  But the data just keeps pouring in, such as the study just published yesterday in Science that concludes that the current rate of oceanic warming is greater than at any time during the previous 10,000 years.

Kind of hard to argue that one, isn't it?  Unless it's just god "whapping" us again.

Posted by Gordon Bonnet at 5:39 AM