It's been a while since we've had any interesting reports of UFO or alien sightings, so I was tickled to find a post yesterday on Paranominal that claims that some hikers near Plovdiv, Bulgaria snapped a photograph of an "alien Grey" while walking through a forest. 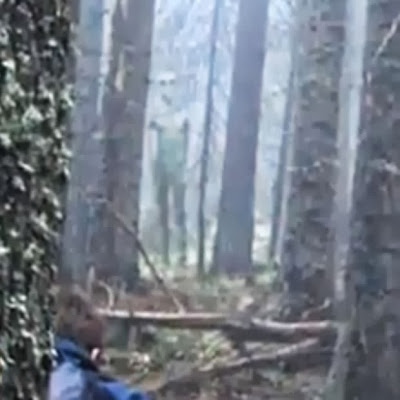 What I find interesting about this photo is that it shows the alien, who appears to be about five meters tall, clearly visible between two trees maybe ten meters further on in the woods, and yet the hikers are still walking toward it in an apparently unconcerned fashion.  I don't know about you, but if I were hiking through the woods and stumbled upon a scary-looking alien creature who was over twice my height, I would not just stroll right on up to it.  At the point this photograph was taken, I would already be running in a comical, Looney Tunes manner in the opposite direction, with my feet only visible as a circular blur.

If I had not immediately died of a brain aneurysm when I spotted the thing.  Which is probably more likely.  I may be a skeptical scientific type, and all, but I am also a great big old coward.  I believe that it is our duty as rationalists to evaluate claims of the paranormal, but I am much more comfortable evaluating them from a safe distance, which in this case would be about fifty miles.

Be that as it may, I'm a little skeptical of this claim.  For one thing, if you watched the video, you'll notice how the alien face becomes way scarier when they isolate and magnify it.  While this may seem like a "duh" statement, part of the reason that alien and ghost photographs become more convincing in close-ups is because they get grainier when you do that -- the image "pixillates."  (For a creepy example of how the brain imposes meaning on grainy data, take a look at this optical illusion.)  Now, as we've seen many times before, humans are great at imposing meaning on patternless images, and we especially like to turn those images into faces (a phenomenon called pareidolia, about which I have written many times before).  But the fact that we become more convinced as the data gets grainy is a little suspicious, and exactly the opposite of what should happen to a scientist.  We should be convinced by precision, not by imprecision.

The last nail in the coffin, for me, came at the end of the video, when I saw who had put it together.  The creator of the video -- and probably the photograph as well -- was one Stephen Hannard, of England, who is also the one who claimed that the Martian probe Curiosity found a fossilized shoe, human finger, and woodchuck on the surface of Mars, and that the International Space Station had captured footage of a giant space slug.  It's not like this guy has any kind of solid track record for veracity.  So I'm perhaps to be forgiven if I find anything coming from Hannard a little suspect from the get go.

So anyhow, I doubt this is really a photograph of an alien, which is kind of a shame.  I'd love it if there was, during my lifetime, incontrovertible evidence of intelligent alien life.  I realize that's easy for me to say sitting here safely in my office thousands of kilometers from Plovdiv, Bulgaria, but I really do mean it.  If an alien spaceship landed in my back yard, I'd even try to overcome my urge to run away or die of fright in order to be the first human to shake their gray, seven-fingered hands upon their arrival on Earth.
Posted by Gordon Bonnet at 4:10 AM