In the past few posts, we've dealt with issues like Siri predicting the Apocalypse, Noah's Ark has been found but the government is hiding it from us, elves are blocking a highway project in Iceland, and Catholic leaders determining that angels don't have wings.  Today, we look at an even more pressing issue:

The question comes up because of a post on the amazingly wacky site Pararational called, and I am not making this title up, "Albino Extraterrestrials in Australia."  In it, we hear about an encounter between a man in an undisclosed location in Australia and some aliens who were, to say the least, peculiar:


A few nights ago I was standing on my balcony at around 2:30 to 3 in the morning.  I usually go out there around that time each night just to look at the stars for a few minutes before going to bed.  That night however, out over the neighbourhood on a foresty mountain just a couple blocks away, I saw this light in the trees.  It was a very bright white sort of pulsing glow, not bright in that it was blinding but bright in that it seemed to light the trees like daylight but pulsing really slowly...  after a couple of minutes or so a glowing white ball looking thing started to slowly rise above the trees. it was very bright but not blinding like the sun or anything...

I got in my car and drove around the block down to where the forest starts and I got out and walked into the forest.  I couldn’t hear anything but I could see the general direction which the light was coming from.

I followed it until another of those balls came into view. I was probably about 30m away when I could suddenly see silhouettes walking around past the ball up ahead. I tried to get closer but I couldn’t will myself to move. A really kind sounding voice from behind me said “do not be afraid” and then suddenly I was able to move again which caused me to fall face first into the ground.

I rolled over and standing over me was a very tall man with long white blond hair and very pale skin wearing what looked like a white onesey, all fluffy looking...  He leaned over and helped me up and that’s when I noticed something really freaky. on either side of his neck was a small but long slit that moved when he breathed.  It kinda looked like gills on a fish but it was just one slit on each side. this man helped me up off the ground and lead me over to where this floating ball was.

So, let's see... thus far, we've got a tall albino alien, with gills, wearing what amounts to fluffy footed pajamas.  It couldn't get any weirder, right?


…around this ball were several smallish people wearing black hooded robes and holding long metal rods, sort of like a staff or walking stick. They sort of reminded me of grim reapers with a walking stick instead of a scythe.

The man was calming yet he looked really freaky, especially the gill things he had. The hooded people never showed their faces which was pretty scary looking. Made me think it was some sort of satanic cult or something but the tall man was able to paralyze me without touching me at all and I don’t know how he did that.

And the tall albino in pajamas was surrounded by midgets dressed up like the Grim Reaper.  Got it.

After receiving this report, the people over at Pararational decided to do what any sane individual would do, on reading a story like this; they immediately tried to figure out which race of aliens these assorted weirdos represent:


So the question now is what exactly what race of extraterrestrials did this man encounter in Australia?  What race was this alien, and what is up with the shorter minions?   Sounds reminiscent of the Grey Aliens and their taller and shorter members...  (A) “Very tall man with long white blond hair and very pale skin.”  This sounds very much like some descriptions of the Annunaki.  Are they back to check up on us? 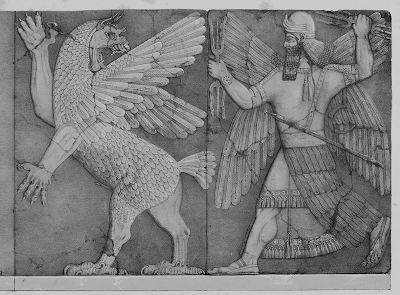 If you're curious, the dude on the right is what the Mesopotamians meant by "Annunaki."  No gills, no long blond hair, and no (thank heaven) footed pajamas.  [image courtesy of George Lazenby and the Wikimedia Commons]

Which leads us to another story, this time from UFO Digest, called "Zeta Craft and Their Propulsion System," which tells us about contact with aliens called the "Zeta Race" that has resulted in a guy named Paul Hamden finding out all about their super-advanced technology.  We are told, in the opening paragraphs, that the authors are going to give us details about Zeta science and technology, but when you read further, you find out that the details aren't very... detailed:


The Zetas are physical beings who live in physical environments, but they also have the ability to extend their activities to a non-physical, energetic environment where different laws of nature apply.  The energetic realm holds templates, also known as etheric bodies, that define the properties of associated forms in the physical universe.  In these non-physical realms, consciousness has the ability to create with thoughts...

Our craft are of a nature that are able to support our biological framework.  These craft are living entities...  The craft behaves like a single-celled organism so that it is without doors or windows.


They (the craft) are grown from what was initially a hybrid framework designed by our best technical and scientific beings, so this explains why we have craft who can also "self-heal". The craft are generic, genetically modified structures. Not all craft have individual operators, but as there are certain parts of our DNA replicated, there is one standard craft for beings to use. There are specific craft for specific beings. These beings are utilized to move in different dimensional aspects of the non-physicality of this physical universe.

Okay, non-physicality of the physical universe means... um... that some things are physical, and then other things aren't?  How can you have a non-physical thing?  I thought the word "thing," by definition, meant "physical."


This statement says that the craft are designed to respond to operators with Zeta DNA. There is a standard craft that can be used by any Zeta because the craft responds to certain segments of DNA shared by all Zetas. There are also specific craft that respond to unique sequences of DNA possessed by particular Zetas. The latter craft and operators are used to move to and from non-physical dimensions of the universe.

So the spaceship recognizes your DNA, and then just makes the ship go where your DNA tells it to?


The Zeta adds that the craft, like all living things, needs sustenance or a source of energy to survive. He says, “There is a basic life force woven into the fabric of the universe. This energetic form, waveform, feeds and nourishes these cellular craft.” For the Zeta, the basic life force of the universe is the energy of consciousness. Everything that is and can be experienced is constructed from this fundamental substrate.


The process of wave shifting involves interaction with the field that 'is and always is'; that is, the energy of source consciousness. So the craft's intention to move invokes the creative process at a particular level of this consciousness field to relocate its etheric body in the matrix.

Whew.  That was close.

Anyway.  I'm thinking that what we have, here, is just two cases of rampant hallucinogen use.  There's no reason to believe that there are Zetas, or Annunaki, or midgets in Grim Reaper suits, or tall pajama-clad gilled albino aliens hanging around the Earth.  And I think now I'm going to wrap this up, and then relocate my etheric body to the kitchen, where I can gain some sustenance from the life force of a second cup of coffee.
Posted by Gordon Bonnet at 4:45 AM