Yesterday a loyal reader of Skeptophilia, and frequent contributors of topics thereto, sent me a link with the note, "Nothing like explaining one crazy idea using another crazy idea, is there?"

The link brought me to a page on Above Top Secret entitled "A Possible Reason for Chemtrails: A Form of Galactic Protection?" in which we learn that the government might have a positive reason for chemtrailing the absolute hell out of all of us.

They are trying to create a screen to shield us from the sensors of alien spaceships that intend to destroy all life on Earth.

At this point, you're probably already facepalming.  But in the words of the 1980s infomercials -- "Wait, there's MORE!"

How does the author know that this is possible?  Because that's what happened to Venus:


'Under all those sulfuric clouds [on Venus] there is a whole ecosystem'...  [W]hat if it's possible that there IS and ecosystem under those clouds, but not just an ecosystem; a whole civilization!

What I am getting at is what if the reason that the TPTB (or whatever you'd like to call them) are spraying chemtrails is to create a layer of atmosphere that will constantly reflect sunlight (When viewed from the outside of our atmosphere) hence making us look as bright as Venus at the moment. This in turn will hide us from any alien predators IF there are any lurking out there looking for a place to conquer and devour.

Of course, there's just one teensy problem with this idea, besides making me wonder if the author's skull is filled with PopRocks.  And that is that the temperature on Venus is so high that the first probes to land there got fried.  To quote Universe Today:


There are many geophysical similarities between Venus and the Earth. Average temperature is not one of them. Where the Earth has an average surface temperature of 14 degrees Celsius, the average temperature of Venus is 460 degrees Celsius. That is 410 degrees hotter than the hottest deserts on our planet...  The atmosphere has made visual observation impossible. It contains sulfuric acid clouds in addition to the carbon dioxide. These clouds are highly reflective of visible light, preventing optical observation. Probes have been sent to the surface, but can only survive a few hours in the intense heat and sulfuric acid.

So our alleged "ecosystem and civilization" down there would be a little on the toasty side.

The whole thing reminds me of one of the funniest moments on the wonderful 1970s science series Cosmos, written and hosted by Carl Sagan, in which he describes an earlier set of "inferences" (if I can dignify them by that term) about what might be on Venus:

Observation: we can't see a thing on Venus.  Conclusion: dinosaurs.

Unfortunately, there are still a lot of people who think this way, and with a small amount of digging, I found that there are still apparently folks who believe that there are aliens down there under the clouds on Venus.  Here's an excerpt of a "top secret file" I found, which I know is top secret because it says so at the top of the page, and which is so incredibly secret that you can find it with a thirty-second Google search using the keywords "Venus civilization:"

EVIDENCE OF CIVILIZATION ON VENUS


It is scientifically possible for material plane beings to live in an atmosphere on another planet, that is too hot or chemically fatal to Earth humans, by constructing underground air-conditioned bases or cities protected from the elements on the surface. It is also feasible to create air---conditioned domes on the surface of other planets that have artificial atmospheres exactly like on Earth, and American scientists admit they already have the technology and plans to create these bases on Mars and our Moon. Therefore extraterrestrials with the superior technology to create disc--shaped U.F.O.s, that are detailed in dozens of photos and documents in the U.S. Air Force released Project Bluebook files, could logically possess the advanced science to create such bases on the surface of the planet Venus.

The physicists William Plummer and John Strong stated that Venus may have large areas of bearable temperatures. The regions near the Venusian north and south poles would be much cooler than the areas reportedly monitored by space probes. Furthermore, according to Professor Alexander Lebedinsky, in the Soviet Union, in data suppressed by the United States Pentagon complex, the usual surface temperature of much of Venus must be about 110 degrees Fahrenheit, even though "radio---electric" measurements indicated 700 or more degrees. Similar observations can be made on the relatively COOL surfaces of gas tubes used in neon signs, because the radio--electric equivalent of those tubes is also several thousand degrees!

Yuppers.  There you have it.  The Venera, Mariner, and Magellan probes, which sent back photographs from Venus's surface, just accidentally landed over and over on Venusian neon signs, and it confused the sensors.   Never mind that every single photograph they took looked like this: 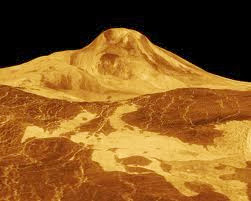 So whatever "civilization" the Venusian chemtrail-cloud-anti-alien-shields are there to protect must not mind being red hot and swimming around in liquified rock.

On a more somber note, I hope that there's not a grain of truth to all of this nonsense -- that what we are currently doing to the atmosphere, in the form of excessive fossil fuel use, might not generate a runaway greenhouse effect.  In the same episode of Cosmos that Sagan quipped about dinosaurs, he threw in his own cautionary note -- that the reason Venus is so hot is only partially its greater proximity to the Sun.  It is largely due to the huge amount of carbon dioxide in its atmosphere.  So while the author of our original webpage perhaps didn't intend it, there's a way in which there is a connection -- enough injection of carbon dioxide into our atmosphere, via the burning of hydrocarbons like jet fuel, and we might well raise the surface temperatures out of the narrow range in which carbon-based life is possible, altering our Earth into a planet like Venus -- a place that, to once again quote Sagan, "is very much like hell."
Posted by Gordon Bonnet at 2:44 AM