I don't know about you, but for me Comet ISON was a great big disappointment.  I know that predicting the brightness of these infrequent visitors to the Solar System is an inexact science at best, but all of the "Comet of the Century" hype really had me looking forward to ISON putting on a significant end-of-the-year light show. 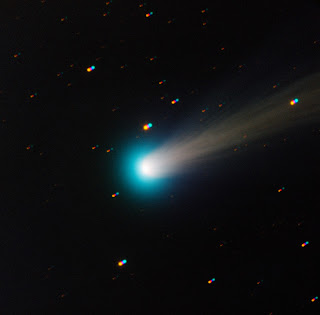 Then, of course, we had the added filigree that ISON was supposed to be an alien spaceship.  Or the planet Nibiru.  Or the Star Wormwood from the Book of Revelation, heralding the start of the End Times, when Satan comes down and turns all of us unbelievers into Heathen McNuggets.  Or, possibly, all of the above.  In any case, it was supposed to be big, the kind of woo-woo event that will never be forgotten, at least until none of the predictions come true, and the next comet comes along, and this time it'll be the real thing, cross our heart and hope to die.

But ISON failed even to show up.  Some time during perihelion, enough of the comet's icy core melted that it fell apart, leaving nothing but a rapidly-dimming cloud of poorly consolidated dust that never was visible to the naked eye.

Or at least that's the official story.  *cue scary music*

Because, you know, that's the kind of thing they'd tell us, to dupe the unwary.  They want to distract us from the real reason that ISON disintegrated:

It was vaporized by a NASA death ray.

Yup.  A YouTube video by a guy who calls himself DarkSkyWatcher74 tells us that ISON was spinning along, all innocent and unsuspecting, and then a NASA-launched satellite shot some kind of Star-Trek-style photon torpedo at ISON and blew it to smithereens.   As proof he has some videos and still photos of fuzzy, streaky lights which, if you squinch your eyes up and look at them just right, look suspiciously like a bunch of fuzzy, streaky lights.  (A particularly wonderful moment occurs around one minute into the video, where he tells us that he should be able to see the comet from where he's standing, but it's being "blocked by a chemtrail.")

Damning evidence, DarkSkyWatcher74 says.  Smoking gun.  The people at NASA (or "NAS-holes," as he calls them) shot down ISON.  Why would they do such a thing?  Well, he seems kind of sketchy on that point.  NASA is a government agency, he says, and "when has the government done you any favors?"  Well, he's got me there, as long as you don't count the police and the fire department and road maintenance and public schools and so on.  But other than that, nothing, right?

One thing that bothers me, though, is that the woo-woos went out of their way to get our knickers in a twist over how ISON was some kind of evil omen or spaceship full of extraterrestrials on their way to vaporize Earth.  You'd think that they'd be delighted that it was destroyed.  But no.  You can't please 'em no matter what you do.  NASA uses their ultra-high-tech energy weapons, that they developed somehow despite this year's projected $200 million in budget cuts, to blow up the incoming omen (or spaceship, depending on which version you went for earlier), and the woo-woos are all upset.

It's funny how they want to hang onto their worldview, regardless of what happens.  Whatever we see in the sky is evil.  The government is evil.  When the government appears to interfere with what happens in the sky, that's evil too.  It's all evil, with the sole exception of DarkSkyWatcher74, who is the only one enlightened enough to let us know what's going on.

But will we listen?  Nooooooooo.

So, anyhow, that's today's exercise in frustration.  I probably shouldn't expect these people to be logically consistent; after all, they've never done it before, so why start now?  And ISON is gone, however it died, whether just from natural forces at perihelion, or because NASA committed an act of unjustifiable cometcide.  But we should move on, because we've got bigger things to worry about, such as the arrival of Ragnarök on February 22 of next year.  And yes, I mean the whole Norse-god thing, with Frost Giants and Fenrir the Wolf and Midgard's Serpent and Heimdall blowing the Giant Trumpet of Doom.

Should be good times.
Posted by Gordon Bonnet at 2:50 AM