A question that frequently arises when I am perusing writings from the Wide World of Woo-Woo is, "Do these people recognize it when they're just making shit up?"

You'd think they would, wouldn't you?  I mean, I get how suggestible we humans are, how subject to bias, how susceptible to misinterpreting sensory input.  Not only that, we are perhaps more emotional beings than we are cerebral ones, a fact that was brought home to me rather vividly one evening last week when my wife heard a noise downstairs, meaning the choice was "go down and investigate" or "surrender your Man-Card immediately."  So I went downstairs.  And there was no one down there, but by the time I had figured that out, and that we were not in danger of being knifed to death by a psychopath, I had broken out in a serious cold sweat, despite (1) being armed with a pair of fireplace tongs, and (2) the fact that my wife felt sorry for how obviously terrified I was and went with me.

So like I said: I get that we can let our minds get carried away, in a variety of fashions.  But what I don't get is how it can happen without your being aware of it.  So many woo-woos are doing what clearly appears to me to be crafting highly complex works of fiction, and yet the entire time, they seem to be entirely convinced that what they're saying is true.

This comes up because of a site I stumbled upon called Cosmic Doorways, wherein I found the following image: 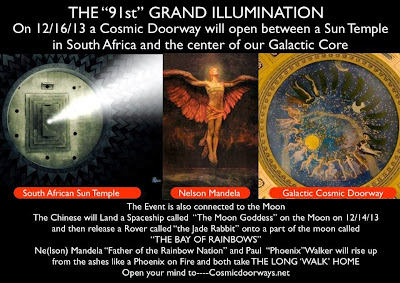 We have a few problems here right from the get-go, not least being their representation of Nelson Mandela as a skinny half-naked white guy with blond hair.  And wings.  But the crazy doesn't even end there, more's the pity; they connect Mandela with the Chinese moon lander, and throw in Paul Walker for good measure.  Some time today, they say, Walker and Mandela are going to go through a "cosmic doorway" that will transport them from South Africa to the galactic core.

If I've been wrong all along, and there are immortal souls, I hope like hell this isn't true, because in the middle of the galactic core is a big-ass black hole.  How unfair would that be?  Walker just died in a fiery car crash, and Mandela passed away at age 95 after a long life filled with strife and struggle against oppression.  So they die, and their souls are floating around the place, looking forward to heaven, or at least something better than car crashes and solitary confinement, and WHOOAAAA they both get sucked, feet-first, down a black hole.

I'd like to be able to tell you that there is evidence that the Cosmic Doorways people are joking, but they appear to be entirely serious, despite the fact that damn near everything on the site seems to have been made up.  They show stills from the movie Stargate as if it were some kind of historical documentary.  They have photographs of every last object on the Earth that is shaped like a ring, along with captions indicating that these are secret high-energy portals.  There are lots of images of the Virgin Mary, because "she is a vessel that allows beings to come and go between dimensions."  They say that the "Four Corners" region of Utah, Colorado, New Mexico, and Arizona is magical because the "Four Corners" make a cross shape, even though I can't think of another shape that the junction of four more-or-less rectangular states could possibly make.  They have lots of quotes from the songs of The Doors, because, hey, doors, right?  They claim that the way to use these cosmic portals is by sharpening up your pineal gland, and/or taking hallucinogenic drugs, the latter of which may explain a good bit of the content of the site.

But still.  Even considering that the author may well have taken more DMT and ayahuasca than his neurotransmitters could handle, it still strikes me that he must, on some level, be aware that what he's writing can't possibly be true.  For example, he identifies the following as a "stargate:" 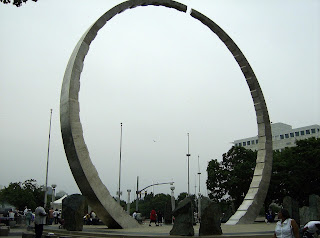 [photograph courtesy of photographer Mike Russell and the Wikimedia Commons]

Despite the fact that it is actually not an intergalactic portal at all, but the Michigan Labor Legacy Landmark in Detroit's Hart Plaza, and hundreds of tourists walk through it every day without being transported anywhere much but the other side of the monument.

So.  Yeah.  Anyhow.  I read things like this, and I keep saying to myself, "Is this guy joking?  Or what?"  But in this case the answer, sadly, appears to be "No."  He really does think that Nelson Mandela and Paul Walker are going to be transported to the galactic core today.  And furthermore, he apparently views this as a good thing, as is Mandela's miraculous ethnic transformation.

As for me, I think I'll stick with reality.  It's not nearly as psychedelic, but at least I'm reasonably sure that the doorway of my office won't suddenly send me to the core of a distant star, or anything.  You can see how that'd be unpleasant.
Posted by Gordon Bonnet at 2:15 AM