Dogma vs. science vs. history

I don't, for the most part, frequent religious blogs and websites.  As I've mentioned before, the majority of religious writers are starting from a stance so completely opposite from mine that there is barely any common ground on which even to have a productive argument.  So I generally only address religious issues when they either stray into the realm of science (as with the conflict over evolution), or when they begin to intrude on social or political realms (such as Dana Perino's claim earlier this year that atheists should leave the United States).  Otherwise, the religious folks can entertain themselves all they like about the meaning of scripture and the nature of god, and I'll happily entertain myself with the equally reality-based discussions about Bigfoot and aliens.

But just a couple of days ago, Catholic blogger Stacy Trascanos came out with a claim that is so bizarre that I felt like I had to respond to it.  In her piece entitled, "Without Dogma, Science is Lost," Trascanos makes the rather mindboggling claim that not only does science owe its origins to religion, science needs religion today -- as a fact-checker:


People also wrongly assume that dogma restricts science too much.  On the contrary, divine revelation nurtured and guarded a realistic outlook in Old Testament cultures, in early Christianity, and in the Middle Ages.  This Trinitarian and Incarnational worldview was, and still is, different from any pantheism or other monotheism, and it provided the “cultural womb” needed to nurture the “birth” of science...

To do science well, a working knowledge of Catholic dogma is necessary.  To know what directly contradicts the dogmas of revealed religion and to make such distinctions guides the scientist.  The accomplishments of the medieval Catholic scholars demonstrate this abundantly. You’ve heard the axiom, “Truth cannot contradict truth.” The Scientific Revolution is evidence of it...  (S)cience needs to be guided by faith, and that the Catholic Church has a legitimate right and authority to veto scientific conclusions that directly contradict her dogma.  This is not about the Church being against science, but about the Church being a guardian of truth.

I probably wouldn't have been as shocked as I was by all of this if I hadn't read Trascanos's bio at the bottom of the page, in which she says she has a Ph.D. in chemistry.  So these aren't the rantings of someone who has never studied science; Trascanos herself is a trained scientist, who gave up a career as a research chemist to pursue an M.A. in theology.

But a deeper problem with all of this is that she's simply factually incorrect.  Rationalism, and the scientific method it gave birth to, started with people like Anaxagoras and Democritus and Thales, long before Christianity began.  The idea that we could find out about the laws of nature by studying lowly matter was profoundly repulsive to early church fathers, who by and large took the mystical approach -- also, interestingly, launched prior to Christianity, by people like Pythagoras -- that the road to knowledge came from simply thinking, not experimentation.  (The desperation of medieval astronomers to make planetary orbits conform to perfect circles and the "five Platonic solids" comes largely from this approach.)

And as far as Christianity's acceptance of, and nurturing of, science, you only have to look at the story of Hypatia to realize what a crock that is.  Hypatia was a philosopher, teacher, mathematician, and astronomer in 4th century Egypt, who ran afoul of Bishop Cyril of Alexandria for her "ungodly teachings."  On his orders, she was kidnapped on the way home from the Library of Alexandria, and was cut to pieces with sharpened roof tiles.  Her body was burned.

Cyril went on to be canonized.

The problem, of course, is one we've encountered before; science and religion approach knowledge two completely incompatible ways.  Science bases its understanding on evidence; if new evidence arises, the understanding must change.  Religion, by and large (although there are some exceptions), bases its knowledge on revelation and inward reflection, not to mention authority.  Change in scientific understand can occur at lightning speed; change in religious understanding is slow, and frequently met with much resistance from adherents.  As Trascanos said, "...divine revelation nurtured and guarded a realistic outlook in Old Testament cultures, in early Christianity, and in the Middle Ages."  I would argue that because of this, self-correction seldom occurs in religion, because any alteration in belief is much more likely to be looked upon by the powers-that-be as an error of faith.

But the bottom line is, Trascanos is right about one thing; if science and religion come into conflict, there is no reconciliation possible.  You have to choose one or the other, because their decision-making protocols are inherently incompatible.  Trascanos, despite her scientific training, has chosen religion -- a decision I find frankly baffling, given the fact that science's track record in uncovering the truth is pretty unbeatable. 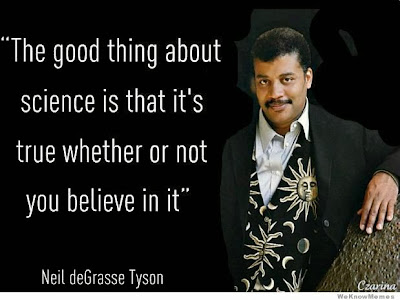 Still, I'm left with feeling like I still don't quite get how an obviously well-educated person as Trascanos can make claims that are so clearly counterfactual.  The thesis she so passionately defends is contradicted not only by history, but by science itself -- given the number of unscientific stances that were once considered "revealed truth" by the church, and which have since been abandoned.  (The whole heliocentric/geocentric argument is so well-known as to be a cliché; but check out this article, which attributes much of Galileo's troubles with the Vatican as coming from his stance on the existence of atoms [they exist] and his explanation of why things float in water [low density].)

But all other considerations aside, we're back to the condition of agree-to-disagree.  However Trascanos wants to try to reconcile science with religion, she has arrived at the appropriate conclusion of falling on one side of the fence or the other.  It's just that she's chosen a different side than I have (actually, I tend to think that the other side of the fence doesn't exist, but that's an argument for a different day).  And now, I really will leave behind the shaky ground of religion and philosophy, and return to my happy place, populated by Bigfoot and aliens.

To each his own, I suppose.
Posted by Gordon Bonnet at 5:12 AM