I told myself that I wasn't going to write about Phil Robertson, the guy from Duck Dynasty who has become the darling of the Religious Right for saying that he has a hard time understanding gays.  I kept seeing article after article and tweet after tweet on the topic, and sat there going, "Uh-uh.  Nope.  Not doin' it.  Nope."

I think it may have been Sarah Palin's tweet that tipped the balance.


Free speech is endangered species; those "intolerants" hatin' & taking on Duck Dynasty patriarch for voicing personal opinion take on us all

At that point, I said, "Screw it."  Just about everything I'd read about the situation from both sides was pissing me off, so I decided to write about it, because my cure for being pissed off is to write a post here on Skeptophilia and thus piss everyone else off.  So here we go; the 1,283,298th person to opine about the brilliance, ethics, and philosophy of Duck Dynasty. 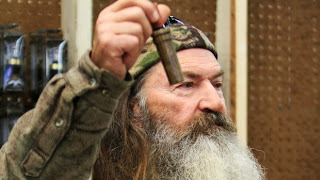 Since I mentioned Sarah Palin, let's begin there, okay?  Starting with the fact that this is not about free speech.  Not one person I saw who objected to Robertson's pronouncement (which I shall quote momentarily) said anything about how he didn't have the right to say what he said.  They did, however, say he was bigoted and homophobic, and called him a variety of other epithets that I will refrain from mentioning, which is not the same thing.  A&E, the network that runs Duck Dynasty, suspended him because he'd crossed the line from homey and redneck and quaint into being offensive, a decision that the network executives have every right to make.  Free speech means that you have the right to state your opinion, but it doesn't protect you from the repercussions thereof with respect to keeping your job.

Of course, that didn't stop other political pundits from jumping on the bandwagon.  Louisiana governor Bobby Jindal, who is considered a front runner for the Republican nomination in 2016, showed that his understanding of constitutional rights was a little sketchy for someone considering a run for the White House when he weighed in with, "I remember when TV networks believed in the First Amendment.  It is a messed up situation when Miley Cyrus gets a laugh, and Phil Robertson gets suspended."

Much as it pains me to admit that I agree with Jindal about anything, I have to say that in my opinion, the video of Miley Cyrus "twerking" was about as sexy as a dog humping someone's leg.  But that's as far as I'll go, and Jindal's claim that this has anything to do with the First Amendment is patently ridiculous.

So anyway, now it's time to throw out there what exactly Robertson said.  So here goes:


It seems like, to me, a vagina—as a man—would be more desirable than a man’s anus. That’s just me. I’m just thinking: There’s more there! She’s got more to offer. I mean, come on, dudes! You know what I’m saying? But hey, sin: It’s not logical, my man. It’s just not logical...  Everything is blurred on what’s right and what’s wrong.  Sin becomes fine...  If somebody asks, I tell ’em what the Bible says.  All you have to do is look at any society where there is no Jesus. I’ll give you four: Nazis, no Jesus. Look at their record. Uh, Shintos? They started this thing in Pearl Harbor. Any Jesus among them? None. Communists? None. Islamists? Zero. That’s eighty years of ideologies that have popped up where no Jesus was allowed among those four groups. Just look at the records as far as murder goes among those four groups.

So, yeah.  I just have three things to say about all of this.

First of all, sexual attraction has very little to do with logic, so saying that it's logical for a guy to prefer a woman's naughty bits over a man's isn't so much bigoted as it is idiotic.  It's not like straight people sit around when they hit puberty thinking, "Hmmm, which set of parts do I find attractive?  Let's see, I dunno... but I'm sure I can use logic to figure this one out!"

Secondly, I'm calling bullshit on Robertson's claim of living biblically.  Let's start with all of the kosher laws in Leviticus, which I highly doubt that the squirrel-eating chaps on Duck Dynasty have even read, much less follow.  Also, it bears mention that anyone who lived by all of the precepts of the bible would be in jail, given that the bible has verses that explicitly command you to stone disobedient children (Deuteronomy 21:18-21), allow you to own slaves as long as they come from another country (Leviticus 25:44-46), and order you to burn to death members of other religions, along with all of their livestock (Deuteronomy 13:13-19).  To name just a few.  So the whole idea of living your life by the bible's commands is ridiculous.  Folks who claim to be fundamentalists are automatically cherry-picking the stuff they like, especially from the Old Testament, which means that the people who are using biblical justification to hate on gays are actually just bigoted assholes who are afraid to come right out and admit it.

But third -- and this is directed at all of the people who are outraged by what Robertson said -- what exactly did you expect him to say?  Did you not know he was a bible-thumper?  This guy thumps the bible so damn hard it's surprising he doesn't dent the cover.  Was it really such a surprise that he doesn't like homosexuals?  And for cryin' in the sink, this is a "reality show," which means that the whole thing -- including the article in GQ that started this tempest in a teapot -- was engineered for one reason, and one reason alone, and that is publicity.  If they can rile people up, even offend the hell out them, that's okay, as long as their audience keeps watching.  This is why I'm guessing that the executives at A&E will very quickly step down from their high horses and reinstate Robertson.  This is too good a money-making opportunity to pass up, especially given that #PhilRobertsonForPresident is now trending on Twitter.

Now, don't get me wrong, I'm not defending Robertson.  It's just that the last thing anyone should expect from a reality show is reality.

So the whole thing is just annoying, and I am seriously looking forward to it all dying down, which considering the attention span of the average American, should take about three days.  The bloviators over at Fox News will probably try to string it all out for longer than that, but chances are, we'll be on to the next celebrity gossip really soon, and I'll be able to move on to more important topics myself, like the fact that Spike is going to be airing a show called 10 Million Dollar Bigfoot Bounty starting January 10.

Now there's a show that isn't afraid to look reality in the face.
Posted by Gordon Bonnet at 1:57 AM