Having taken on, in recent posts, topics such as how buying into conspiracies makes you doubt facts, the role of paranoia in American politics, and Monsanto and its role in creating GMOs, today I'd like to turn to an even more pressing issue, to wit:

Is the Earth being controlled by mentally retarded Nordic alien angels? 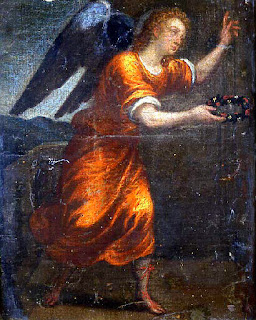 That is the contention of the author of the site Montalk.net, the link for which was sent to me by a frequent contributor to Skeptophilia, and that introduces the concept thusly:


There is far more to this world than taught in our schools, shown in the media, or proclaimed by the church and state. Most of mankind lives in a hypnotic trance, taking to be reality what is instead a twisted simulacrum of reality, a collective dream in which values are inverted, lies are taken as truth, and tyranny is accepted as security. They enjoy their ignorance and cling tightly to the misery that gives them identity.

Yup, that's me, clinging to my ignorance over here.  But what should I believe, then?  We find out a bit under "Key Concepts," which starts out innocuously enough -- some stuff about the nature of god, spirit, souls, and so on, not too very different than you might find on a number of religious or quasi-religious sites.  But then we hit the concept "Evolution," and if you're like me, there's the sense of an impending train wreck:


If I could evolve consciously, I'd evolve wings.  Great big feathery wings from my shoulder blades.  I know it'd make it hard to put on a shirt, but that's a downside I'd be willing to accept, in order to be able to fly.

Speaking of wings and flying, we really get into deep water when he starts talking about angels.  Because according to this guy, angels are real -- again, not thus far so very different, at first, from what a lot of people believe.  But wait until you hear what he thinks angels are.  (Do NOT attempt to drink anything while reading this.  I will not be responsible for ruined computer screens or keyboards.  You HAVE been warned.)


Mankind is unwittingly caught in a war between hidden superhuman factions who select, train, equip their human agents to participate in that war...  There is warring among these beings, indicating they are not all unified. At the very minimum they are polarized into opposing sides, if not split into numerous independent factions. Some factions have a strong fascist orientation.

The Nordic aliens are genetically compatible with us, and some of their females have engaged human males for sexual encounters and even long term relationships. Through interbreeding their genes can enter our gene pool and vice versa. Therefore some human individuals and bloodlines would have more of their DNA than others, and their angelic alien DNA would likely show under analysis to be basically human, albeit rare and unusual.

So, we could tell that a human had angelic alien DNA because if we analyzed his DNA, we'd find it was... human?

We then hear about what these beings are not: these misidentifications include hoaxes (don't be silly), "metaphysical entities," members of the Galactic Federation, and Super Nazis.  So thank heaven for that, at least.

We also get to read lots of stories about alien abductions, many of which include some serious bow-chicka-bow-wow with blond-haired Nordic aliens aboard their spaceships, and which presumably allowed the lucky abductee to claim membership in the Light-Year-High Club.  But then we hear the bad news, which is that the aliens who have visited us, and who have apparently engaged in a great deal of cosmic whoopee with humans, are actually mentally retarded:


The members of the Nordic alien civilization are not all homogenous in standing or understanding. Composition ranges from a two-tier system of “lower retarded ones” and “higher advanced ones” to caste-like systems with many tiers similar to the Indian caste system.

The retarded members of their kind are the ones who interact with the most advanced of humans. Why? Maybe because of their evolutionary closeness, and also because such an interaction could be mutually beneficial. Despite their seeming superhuman qualities, those aliens who interact most with select humans may, in fact, be the most flawed of their race.

The problem... is that their most flawed ones are not only the creators and users of demiurgic technology, but they are also most involved in human affairs. This means we suffer their errors, which are graver in consequence than any mistake we could commit, just as our errors are more severe than those possible by animals.  The consequences of these errors and grave transgressions have cascaded back and forth throughout the timeline. They are now converging toward a nexus point representing the potential for a cataclysmic shift. Alien factions who were responsible for initiating these consequences are likely the same ones who are now involved in the final outcome. A thread of continuity exists between the most ancient and modern of human-alien encounters. The alien disinformation campaign is an effort by one set of such factions to prepare mankind for enthusiastic acceptance of their overt control.

Well, hell.  This is even worse than the Illuminati-in-the-government thing, or the Evil-Reptilian-Alien thing, or even the Comet-ISON-is-a-spaceship thing.   We're being controlled by mentally deficient aliens, who can screw things up even worse than plain old humans could?  All because they've come to Earth looking for some hot human/Nordic alien action?

I don't know about you, but I don't like this at all.

There is more on the website, of course, including stuff about the Holy Grail, the Ark of the Covenant, the North Pole, Adam and Eve, alchemy, dimensional portals, the ether, the Pyramids, zombie computers, and snakes.  I encourage you to peruse it.  I would have read more myself, but it seems a little early in the day to start drinking, and I just don't think I could have managed it without a glass of scotch.

So, anyway, there you have it.  As if we didn't have enough to worry about, now we find out that the rulers of the world are blond-haired moronic alien angels, and (worse still) that some of us are descended from them.  I'm guessing I'm not, though.  I am blond, but I've got my family tree pretty well mapped out, and I haven't run into any records that show my great-great-great grandma getting knocked up by the Archangel Derpulus.  That's okay with me, honestly.  If I don't get wings out of the bargain, to hell with it.
Posted by Gordon Bonnet at 3:01 AM