One thing I would love to know is how groups of people end up being superstitious.  Not individuals; you can see how specific individuals could become superstitious about odd things, through a combination of classical conditioning and confirmation bias (you wear a specific t-shirt to a football game, and your team wins; you link the t-shirt to the win, and every time something good happens while you're wearing that shirt, it reinforces the belief.  Voilà -- "lucky t-shirt").

But how do specific counterfactual beliefs become so entrenched, despite a complete lack of evidence, that entire cultures begin to buy in?  I know that this is skating onto some seriously thin ice for some people, and I've no intention to skate any closer.  In any case, as you'll soon see, I'm not talking about what you probably think I'm talking about.

The reason this question comes up is because of a link sent to me by a frequent contributor to Skeptophilia, regarding a highway project in Iceland that has been blocked -- because the project will upset the elves. 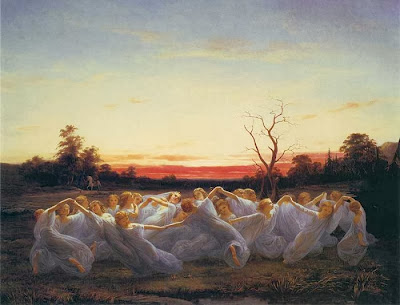 The project was designed to create a direct route from the Álftanes peninsula to the Gar∂abær suburb of Reykjavík.  But the highway was supposed to cut across a lava field inhabited by huldufólk, the Icelandic version of the Little People, and this got some people seriously up in arms.  A group calling themselves the "Friends of Lava" banded together with the intent of stopping the project, citing "detrimental effect on elf culture" -- and amazingly enough, it worked.

"(The highway project) would be a terrible loss and damaging both for the elf world and for us humans," said Ragnhildur Jónsdóttir, a folklorist and seer from Reykjavík who was instrumental in halting the project.  "If you ask an Icelander about elves, they might say they don't believe.  But we always have stories of them, if not from ourselves then from someone close like a family member. Of course, not everyone believes in the stories, but the stories and the elves are still there and being told."

So the project appears to have been scrapped.  "Some feel that the elf thing is a bit annoying," said Andri Snær Magnason, a prominent Icelandic environmentalist.  "However, I got married in a church with a god just as invisible as the elves, so what might seem irrational is actually quite common [with Icelanders]."

What I find interesting about these beliefs is that they run counter to the usual perception of superstition being more common amongst the poorly-educated.  Iceland has an amazing educational system, resulting in a citizenry with a near 100% adult literacy rate.  They have the world's highest percentage of their GNP (8%) used for supporting education.

So the whole idea of education and superstition being inversely correlated apparently isn't true -- if we can draw such a conclusion from a sample size of one.  You would think that as the population becomes better educated, the amount of adherence to odd cultural beliefs would diminish, but despite the dramatic advances in education in Iceland in the past century, the belief in the huldufólk remains strong enough in Iceland to generate a legal block to a highway project.

I still think that learning critical thinking is the best way to counter non-evidence-based ways of thinking, so it appears that something else must be going on here.  One thing that comes to mind is that Icelanders are, as a group, extremely proud of their heritage, language, and history, and this is bound to make them more culturally conservative.  Beliefs and practices can be powerful indicators of cultural identity -- witness the members of my wife's family, who are descended from Lithuanian Jews, and who still celebrate a lot of the Jewish holidays and rituals -- although they have, by and large, abandoned the religious underpinnings.

So I still find the Icelandic elves a peculiar thing, but I'll have to leave it to someone with a better background in folklore and anthropology to answer the question in a more rigorous fashion.  I guess it's to be expected that certain vestiges of old beliefs persist, even if the rest of the system has gone by the wayside.  Now, y'all will have to excuse me, because I need to finish this up.  I've got Christmas presents to wrap.
Posted by Gordon Bonnet at 4:16 AM