I suppose it had to happen.  Eventually, if you buy into conspiracy theories -- where you consider the people in charge, and the media outlets, to be lying to you in order to push forward some sort of secret agenda -- you'll come to the logical end point of that belief system.

That everyone is lying to you.

That, at least, is the contention of a guy who posted on the website Above Top Secret a couple of days ago, heading his post, "Could Every Story on the News be Fake?"  Wondering how anyone could think that, of course I clicked on the link.  After all, this would mean that stories in my local paper this morning reporting on last night's Winter Festival Parade in my home town were false, and that the police closed Route 96 for two hours as some kind of diabolical False Flag, perhaps using coded Illuminati messages cleverly backmasked in Christmas carols.

So the post directed me to a video by Ed Chairini (published under his handle "Dallas GoldBug") called The Truth Exposed!  Basically, we seem to have arrived at Conspiracy Theory Nirvana, here.  I only made it through part of it, though, I'll be honest -- the video is an hour long, and that's just Part One of Three.  But on this video, which is like some sort of insane version of James Burke's Connections, we discover that some of the survivors of the the Virginia Tech massacre are "Seal Team Six," which supposedly was the group who participated in the raid that killed Osama bin Laden, except that it never happened.  Another Virginia Tech survivor is actually kidnapped California teenager Jaycee Dugard, who is actually Casey Anthony, who is actually one of the actors on The Bachelorette, who is actually dress designer Rachel Zoe, who is connected to vanished airplane hijacker D. B. Cooper.

And at that point, I gave up.

The problem with people like Chairini isn't just that they exhibit confirmation bias on a scale never before seen in the history of humankind; the problem is that they have moved out past doubt, past cynicism, into some kind of rarefied atmosphere where you can't trust anything.  Everything you see is suspect.  Everyone you know is lying.  Everything you hear is a manufactured falsehood, there to mislead and misinform.

The difficulty with even addressing people like this is that after they've arrived at this place, they're stuck there forever.  The most convincing evidence against their stance, the most logical argument you can craft, only means that you're either deluded (in conspiracy theorist parlance, you've "drunk the KoolAid") or you're actually one of the disinformation agents yourself.  In either case, they have no reason to listen to you, and it cements their feet even more firmly in place. 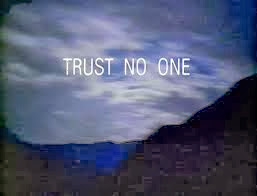 Why someone would go to such lengths to do all of this -- to engineer a fake child murder and subsequent investigation, and shelter the child for years, and then bring her back out so she can "twerk" at the Video Music Awards -- he never tells us.

Or maybe that's just in Part Two, which I am not going to watch.

Cynicism, and its bizarre younger brother conspiracism, are sometimes passed off as sophisticated, worldly stances.  I see students sometimes who act as if statements like "the government always lies," "all of science could be wrong," and "the world is going to hell" are some kind of brilliant intellectual declarations, and that the speaker is therefore a smart and perceptive individual who has seen past the smokescreen.

In reality, of course, cynicism is just as lazy as gullibility -- and it is perhaps worse, because the confidence with which cynics proclaim their "worldview" gives them the veneer of deep thought.  The truth is that disbelieving everything is as bad as believing everything, with the added filigree of making you a generally miserable person to be around.

Better to do the hard work of thinking; better to trust others unless there's evidence to the contrary.  Most people, I maintain, are just ordinary folks who want what we all want -- love, shelter, security, and a good laugh every once in a while.  Peopling your fantasy world with evil manipulators doesn't make you brilliant; it just makes you a bitter, joyless pain in the ass.
Posted by Gordon Bonnet at 5:29 AM