There's now a lawsuit making its way through the U. S. judicial system demanding "legal personhood" for chimpanzees. 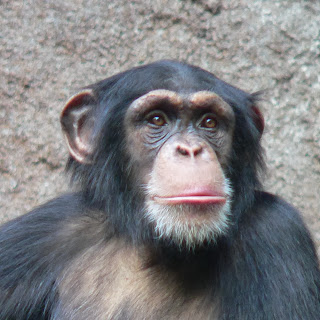 A non-profit organization called the Nonhuman Rights Project has filed three separate suits in a New York State court claiming that chimps are "a cognitively complex autonomous legal person(s) with the fundamental legal right not to be imprisoned."  The suits were filed on the behalf of four chimps who are so "imprisoned" -- two by private, licensed owners, and two by research labs at the State University of New York in Stonybrook.

The lawsuits are extremely likely to be thrown out, and it has nothing to do with whether or not holding chimps in such situations is ethical or not.  They are not human -- and the framing of most laws are explicit in giving rights to humans ("men and women," or "people"), not to non-human animals.  The organization filing the lawsuits might have been better off making the claim based on animal cruelty laws; that an animal as "cognitively complex" as a chimp is undergoing abuse simply by virtue of being imprisoned, even if nothing is explicitly done to hurt it.

It does open up the wider question, though, of what our attitude should be toward other species.  The whole issue crops up, I think, because so many humans consider themselves as disconnected from the rest of the natural world.  I find that a great many of my students talk about "humans" and "animals" as if humans weren't animals themselves, as if we were something set apart, different in a fundamental way from the rest of the animal world.  A lot of this probably comes from the fact that much of our cultural context comes from the Judeo-Christian tradition, in which Homo sapiens wasn't even created on the same day as everything else -- and is, therefore, the only being on earth with sentience, and an immortal soul.

Once you knock down that assumption, however, you are on the fabled and dangerous slippery slope.  There is a continuum of intelligence, and sentience, in the animal world; it isn't an either-or.  Chimps and the other anthropoid apes are clearly highly intelligent, with a capacity for emotions, including pain, grief, loss, and depression.  Keeping such an animal in a cage is only dubiously ethical, even if (as in the case of the chimps at SUNY-Stonybrook) you might be able to argue it on a "greater good because of discoveries through research" basis.

But if we have an obligation to treat animals compassionately, how far down the line would you extend that compassion?  Spider monkeys are less intelligent than chimps, by pretty much any measure you choose -- but not a lot less.  We keep pigs in horrible, inhumane conditions on factory farms -- and they are about as intelligent as dogs.  Down the scale it goes; fish can experience pain, and yet some people will not eat chicken on the basis of its causing another creature pain, and yet will happily devour a piece of salmon.

Douglas Hofstadter, the brilliant writer and thinker who wrote Gödel, Escher, Bach: An Eternal Golden Braid and I Am a Strange Loop, proposes a "unit of sentience" called the "huneker."  (He named the unit after James Huneker, who said of one Chopin étude that it should not be attempted by "small-souled men.")  He is well aware that as neuroscience now stands, it's impossible to assign numerical values to the quality of sentience -- but, he says, few are in doubt that humans are more sentient, self-conscious, and intelligent than dogs, dogs more than fish, fish more than mosquitoes.  (Hofstadter says that a mosquito possesses "0.0000001 hunekers" and jokingly added that if mosquitoes have souls, they are "mostly evil.")  But even though he is talking about the whole thing in a lighthearted way, he bases his own decisions about what to eat on something like this concept:


At some point, in any case, my compassion for other “beings” led me very naturally to finding it unacceptable to destroy other sentient beings... such as cows and pigs and lambs and fish and chickens, in order to consume their flesh, even if I knew that their sentience wasn't quite as high as the sentience of human beings.

Where or on what basis to draw the line? How many hunekers merit respect? I didn't know exactly. I decided once to draw the line between mammals and the rest of the animal world, and I stayed with that decision for about twenty years. Recently, however — just a couple of years ago, while I was writing I Am a Strange Loop, and thus being forced (by myself) to think all these issues through very intensely once again — I “lowered” my personal line, and I stopped eating animals of any sort or “size”. I feel more at ease with myself this way, although I do suspect, at times, that I may have gone a little too far. But I'd rather give a too-large tip to a server than a too-small one, and this is analogous. I'd rather err on the side of generosity than on the other side, so I'm vegetarian.

Although I agree with Hofstadter, I've never been able to give up eating meat -- and I'm aware that the choice is based mostly upon the purely selfish consideration that I really enjoy it.  We belong to a local meat CSA that raises the animals under humane, free-range conditions, which assuages some of my guilty feelings when I'm eating a t-bone steak.

The issue is not a simple one, but I've tried to make my decisions based upon an effort not to cause needless suffering.  Locking up a convicted murderer probably causes him suffering, but refusing to do so on that basis is hardly a reasonable choice.  Ending an animal's life in a quick and humane way to provide me with dinner is, in my opinion, acceptable as long as the animal was treated compassionately while it was alive.  And I extend that qualifier of need all the way down the scale.  I'll scoop up spiders in cups and let put them outside rather than stomp them.  There is no need for me to kill harmless spiders -- however far down the sentience scale they may be.

In the case of the "imprisoned" chimps, there is almost certainly suffering, and (as far as I can tell) little need.  Unless research is of immense and immediate value to humanity, an animal as sensitive and intelligent as a chimp should not be used for it.  There are a great many reasons not to keep animals like chimps in captivity.

Calling them "persons," however, is not one of them.
Posted by Gordon Bonnet at 2:50 AM