Toward more precise speech, I'm going to highlight today the difference between two words that are often used interchangeably: "doubtful" and "skeptical."

To be skeptical means to have an open mind; to approach a claim without bias (insofar as that is possible), and to evaluate it on the twin bases of evidence and logic.  A skeptical approach to (for example) ghosts would be to consider the available photographs, recordings, electromagnetic traces, and so on, and evaluate those based on looking at not only the possibility that they were produced by spirits, but other explanations as well.  We can't start from the conclusion that "these data must mean that ghosts exist;" we must weigh the likelihood of the evidence coming instead from human perceptual biases (e.g. pareidolia), equipment error, natural phenomena, or outright hoaxing.  To be a skeptic, therefore, simply means being an honest scientist.

To be doubtful, on the other hand, means to look at something and say, "Wow, this is unadulterated horse waste."

While I try to lean in the direction of the former as often as I can, I was pushed toward the latter by a website a friend sent me, with the provocative title, "Is Obama a Clone?"  I have observed a general trend, which is that any time someone headlines an article with a question, the answer is almost always "NO."  But I decided to be skeptical at least long enough to read the first paragraph, wherein I found that the author is not claiming that Obama is just a clone.  No, that would be silly.

The author is claiming that Obama is the clone of the Pharaoh Akhenaten.

For those of you who aren't Egyptophiles, let me give you a little bit of background.  Akhenaten was born Amenhotep, some time around 1370-ish B.C.E., and succeeded to the throne as Amenhotep IV in the early 1350s.  He had two wives -- hardly unusual in those days -- Kiya, and the famous Nefertiti.  But outside of his amorous pursuits, he made it clear right away that he wasn't going to do things the standard way.  He tried to abolish the old polytheistic pantheon (Ra, Horus, Anubis, Thoth, Isis, and the rest of the gang) and replace it with a more-or-less monotheistic worship of the god Aten (the sun).  He changed his name to Akhenaten, meaning "Aten is Effective," which is kind of unimpressive as a slogan for a god, don't you think?

Evidently, the Egyptian people by and large agreed with me, because when he died in 1336, his successor Smenkhkare ordered his buddies to go around and basically erase all traces that Akhenaten ever existed.  And the Ancient Egyptians complied with a vengeance.  They chiseled out depictions of him, cut out his name from inscriptions, reinstated the old religion, and basically tried to pretend that he never happened.

Except that now, apparently, we have him back, living in the White House. 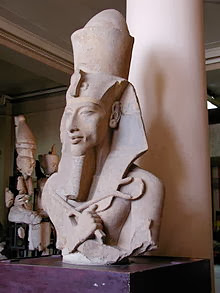 See the resemblance?  No, neither do I.

So, let's see what the author has to say about this claim, and I'll let you determine if we should be "skeptical" or "doubtful:"


If you are interested in both advanced technology and alien-based technology, you will probably be interested in the video clip [on this website].  It originates from www. FreemanTV.com and is about Freeman’s theory of the cloning of the US First Family from an ancient Egyptian (Pharaoh) bloodline.  This brief video will most likely stretch your imagination...  However, cloning technology is not new; and Freeman’s theory is actually possible.  With your inquiring mind, you probably already know about the alien connection to Egypt.  If this theory is true, are Obama and his family are part “gods” (i.e., aliens)?  If so, that, then, begs the question:  What is the purpose for their presence in the US White House?

What blows me away about this guy is that he can actually say all of this with a completely straight face, which either means that he is (1) a hell of an actor, or (2) batshit insane.  Either way, I really do not understand how anyone spouting this stuff can actually attract an audience -- but if you listen to the clip, you will hear that he is evidently speaking in front of a group, because you can hear them ooh-ing and aah-ing appreciatively every time he makes a "point."  And furthermore, another guy thought it was a plausible enough idea to link the video clip on his blog.  So this leads us to the disturbing conclusion that we have not just one wacko guy spouting nonsense, but a whole bunch of people so breathtakingly ignorant of science that they believe what he's saying.

So, there you have it: a claim that moves us from the balanced and thoughtful territory of "skepticism" right out across the thin ice of "doubt" and off into the turbulent seas of "outright ridicule."  I try to resist going in that direction when possible, I honestly do.  But here, I couldn't help myself -- so I tossed aside my measured and scientific evaluation of data, and just went straight for "Nope, he's a wingnut."