And the Entrepreneur of the Year Award for 2013 goes to:

The guy who came up with the concept of "Rapture Letters."

You probably all know about the Rapture, the future event in which all of the True Believers are assumed bodily into heaven, leaving behind the rest of us to deal with the Antichrist, the Beast With Seven Heads, the Four Horsemen of the Apocalypse, the Scarlet Whore of Babylon, and other special offers dreamed up by the God of Mercy to keep us unbelievers entertained until Satan turns up to make us into giant shish-kebobs.  Well, I don't know if it's ever occurred to you that given that the ones who are left behind are going to be those who don't believe in all of this stuff, there will be a rather awkward period after the Rapture (but before the Antichrist et al. show up) where we'll be wandering around, thinking, "Where did Phil go?  He was right next to me in the duck blind just a minute ago." 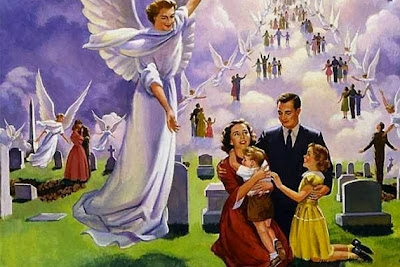 So to explain to your Godless Heathen friends where you went, given that you won't be around to do it, you can sign up for the "Rapture Letter" service.  For only seven dollars, you can add your name to a registry, and after your sudden disappearance an email will be sent to your loved ones that says:

This message has been sent to you by a friend or a relative who has recently disappeared along with millions and millions of people around the world.

The reason they chose to send you this letter is because they cared about you and would like you to know the truth about where they went.

This may come as a shock to you, but the one who sent you this has been taken up to heaven.

If you read a Bible, you will see that after chapter three in the book of Revelation, the church is no longer mentioned as being on earth. (The church are [sic] the believers in Jesus Christ, not the buildings in which people meet.)

In the Bible, 1 Thessalonians Chapter 4 verses 16 and 17 tell how Jesus came to take away His church. But, you have to believe the Bible is the Word of God in order to believe this.

I am sure that there will be a lot of speculation as to what happened to all these people. The theories of some scientists and world leaders will have so much credibility that most of the world will believe them.

But, there is only one truth. And, that truth is that Jesus Christ, God in the flesh, came back to earth and took with Him to Heaven all who believed in Him and made Him their Lord.

If you would like to give your life to Jesus Christ and be born again, it is not too late. First you must pray to God saying "Father I admit I am a sinner, and I will turn from my sin and do good. I believe that Jesus was your son and that He came here to die for me so that my sins would be forgiven. I ask you to forgive me and I will repent of my sins. In Jesus name I pray."

If you just prayed that prayer and meant it with all your heart, then God will know you as one of His own. You should now seek out others who have also given their lives to Christ, read a Bible daily, and do your best to bring others to Christ.

We're also told that the letter will also serve the purpose of saving our friends' immortal souls -- apparently the logic being that if you miss the first bus to heaven, there will be others, even though you will have to wait for a while at the bus stop with a lot of sketchy characters.  "This service will cost you seven dollars," the home page says, "and will hopefully gain the person you send it to an eternity in heaven."

Well, all I can say is: well done.  You've devised a way for gullible people to send you seven dollars for doing precisely nothing.  And given the number of devout gullible people in the world, I'm guessing the money is going to be rolling in for quite some time.

I guess the upside is that if it keeps the nutcases busy, then it's all good.  I feel the same way about the recent news that after a great deal of research, and contrary to the highly accurate art work posted above, Catholic church fathers have determined that angels don't have wings.  The unfortunately-named Father Renzo Lavatori, who calls himself an "angelologist," said in an interview, "(Y)ou have to understand that these are not real representations.  Angels do not have wings or look like cherubs...  You do not see angels so much as feel their presence - they are a bit like sunlight that refracts on you through a crystal vase."

So I'm glad we've got that settled, although it does make me wonder whether, since Father Lavatori calls himself an "angelologist," if I could declare myself to be a "dragonologist."  I've always rather liked dragons, which is why I have one tattooed on my leg, despite the fact that Leviticus 19:28 expressly says I can't do that, a defiance that probably disqualifies me for the Rapture right from the get-go.  So if you want to include me on your email list of people to be notified when you're Raptured, I'd appreciate it greatly.  May as well get the most for your seven dollars.
Posted by Gordon Bonnet at 4:39 AM