Sarah Palin, who is determined for some reason Not To Go Gentle Into That Good Night, is once again winning accolades from the Religious Right.  This time, it's for a book about the alleged "War on Christmas," called Good Tidings and Great Joy: Protecting the Heart of Christmas. 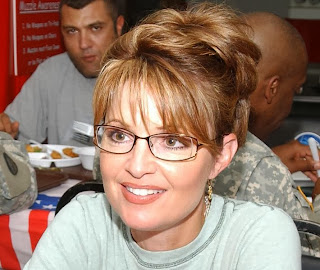 The book alleges that "joyless atheists," presumably including myself, are trying to "abort Christ from Christmas."  She collectively refers to people like this as "Joe McScrooge."  "Joe McScrooge," Palin opines, "armed with an attorney, is really dangerous."

"We were founded as written in our charters of liberty, in the documents that created America," Palin said, in an interview on the Christian Broadcasting Network.  "We're founded on a Judeo-Christian faith that would allow forever the right to express or respect for faith in America...  The road that we are on today is too many of those angry atheists armed with attorneys would try to take away that freedom to express faith. It's going to end in ruin unless we do something about it.  I want this book to be a call to action, to take steps for school districts, for communities, for business owners, for families to understand they don't have to hide their faith.  They don't have to be embarrassed by it.  This war on Christmas is really the tip of the spear when it comes to a greater battle that's brewing.  And that battle that's brewing is those who would want to take God out of our society, out of our culture, which will lead to ruin as history has proven."

Well, wiser heads than my own have addressed her contention that the United States was founded as a "Christian nation;" but I will point out that one of the most staunchly Christian governments this continent has ever seen was the Massachusetts Bay Colony, in which a man was placed in the stocks for an hour for "indecency," because he kissed his wife in public after having been away for three months.   This was the home of floggings for heresy, and hangings not only for witchcraft, but for being the wrong kind of Christian.

Whatever your belief system, I don't think that leaving that sort of thing behind could be construed as "leading to ruin as history has proven."

My central problem with Palin's contention, though, is that the "War on Christmas" that she and her pals at Fox News and the Christian Broadcasting Network like to whinge about really doesn't exist.  No, we Joes McScrooge don't want taxpayer money paying for Christian displays; we don't want Christian messages in our public schools, courthouses, and government offices.  To do so would be exclusionary to the one in four Americans who are not Christian.

But as far as what people do on private property?  No atheist I know gives a damn.  You can erect a crucifix so high it obstructs light plane traffic, as far as I care.  You can put up signs, as a member of my community has, saying, "Who does not accept Jesus Christ will be cast into the fiery furnace" and "The wages of sin are death!"  You can have a Christmas tree in every window and a statue of Santa Claus on your roof.

Because that's what private property means.  As opposed to public property, which implies paid for, and therefore endorsed by, the government.  A distinction that Ms. Palin apparently doesn't understand.

Oh, and for the most part, the atheists I know don't really care whether someone says "Merry Christmas" or "Happy Holidays" to them, because besides operating under the assumption that there is no god, we also have a general rule for behavior, namely, "Don't be a dick."  And like anyone who is not being a dick, we generally respond to the intent of the person we're speaking to, not just the words, and will repay kind intent with kind response.  Of all of the atheists I know -- and I know plenty -- I can only think of one who might get pissy if someone said "Merry Christmas" to him, and launch into a diatribe about how that was making an assumption about his beliefs.  And even he probably would only do that if he was already having a bad day.

So, Ms. Palin, sorry to take the wind out of your sails, not to mention your sales; whatever you and your book may claim, the "War on Christmas" really doesn't exist.  We atheists have bigger things to worry about, like the fact that a good many of your buddies are still trying to get Young-Earth Creationism taught in public school science classrooms, are still trying to make sure that religious-based homophobia is cast into law, are still trying to use the bible to argue that anthropogenic climate change isn't happening.  Given all of the bigger issues we face, the last thing most of us care about is whether you put up a "Jesus Is The Reason For The Season" banner in the local laundromat.

And I'd like to think that's that, but of course, that is never that with these people.  The alleged "War on Christmas" has been going on for years, with the Call to Arms being issued on Fox News before the Thanksgiving turkey carcass is even cold.  And each year, pretty much nothing happens, which you would think would eventually convince them that the "War on Christmas" is a figment of their imagination.

But no.  In that way, they're a little like my dog, who enjoys protecting our house from Evil Farm Machinery.  The difficulty is, we live across the road from a farm, so he barks pretty much constantly.  And each time a tractor goes by, and he barks -- the tractor goes away.  So he thinks that he has accomplished something, something vital, and that without his barking, the tractor would have come straight through the wall, and the farmer would have stolen his rawhide bone.

So he keeps barking.  Because you never know.  You have to keep vigilant.  Never let your guard down for a moment.  Because that farmer, he's a wily guy.

Just like we "Joes McScrooge."
Posted by Gordon Bonnet at 2:47 AM